It might look dull, but it packs a punch 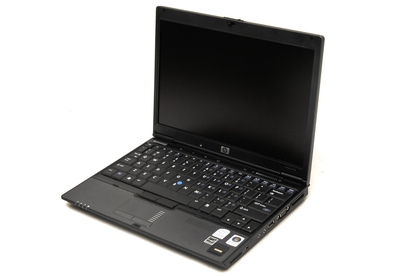 Well built and full of features, this lightweight laptop is perfect for professional users who need good speed and ease of use while on the road.

What's great about the HP Compaq 2510p isn't just its small size and 1.6kg weight; it's that, despite being small, it has plenty of features and it's comfortable to use. It's an ultraportable laptop that's pitched at the business user who requires something very easy to carry, yet something that can still deliver a good amount of performance for office tasks, and last a long time away from a power outlet.

We will point out two of its sore points: its 12.1in screen has narrow viewing angles, so you will need to sit front-on in order to get the best picture, and its touchpad device is very slippery and sensitive. But these points are minor. It's easy to get used to the slippery-feeling touchpad over time, and it's not often that you'll have to sit to the side of the screen. The narrow viewing angles will be most bothersome if you're watching movies while you're on the road.

The screen is encased in a hard lid that feels tough and is very hard to flex. The base is also very solidly constructed. It has a built-in DVD burner on its left-hand side; when you pick up the unit from the left-hand side while a disc is spinning, the disc won't scrape. The keyboard also feels stable; the keys are wide and easy for big fingers to type on, and they produce a decent amount of travel and bounce. If you do a lot of typing while on the road, this keyboard will serve you well.

For navigating the system, you can use the touchpad or take advantage of the TrackPoint-style pointer in the middle of the keyboard. This is convenient to use when you don't have much space in front of you (such as when you're using the unit on your lap while travelling), or when you're too lazy to move your fingers a few centimetres. One thing that did get annoying was the fingerprint scanner: its location on the right-hand palm-rest meant that we'd often accidentally swipe it while typing. This would lead to a 'swipe finger slower' message appearing on the screen. Unfortunately, there isn't any other space on the 28x20.5x2cm (WxDxH) base that can accommodate the scanner.

On the inside of the unit is a 1.33GHz Intel Core 2 Duo U7700 CPU with 2GB of RAM and a 120GB hard drive. This configuration is fast enough to run typical office applications, and it will let you undertake some Photoshop tasks. Multitasking won't be a problem on this unit, either. Our test system came equipped with Windows XP, so we weren't able to run WorldBench 6, but in the iTunes MP3 encoding test, the unit took 2min 13sec to convert 53min worth of WAV files to 192Kbps MP3s, and this was an expected result.

Even though Windows XP was installed on our review unit, the 2510p does ship with a Windows Vista Business licence, so you can install the newer operating system at a time that is suitable. With an Intel GM965 chipset and Intel Active Management Technology, administrators will be able to more effectively deploy updates and troubleshoot the laptop remotely, and there is also a trusted platform module (TPM) installed for data security.

Because it uses an ultra low voltage CPU and has an integrated Intel X3100 graphics chip, the unit's underbelly doesn't get overly warm. After a while, a cooling fan kicks in to extract the warm air that's generated. While it does make a little noise, it's not as loud as most fans we've heard.

Along the sides of the unit, you get two USB 2.0 ports, and FireWire, D-Sub, headphone, and microphone ports; a 56Kbps modem is thrown in for good measure. Rather than a modern ExpressCard slot, a PC Card slot facilitates expansion cards on the right-hand side of the unit, and it sits above the SD memory card reader. There is also a facility for a port replicator. The rear has a Gigabit Ethernet port, while an 802.11a/g/draft-n module is installed for wireless networking.

The only feature missing from this laptop is a webcam, but this isn't an essential bit of kit unless you make regular use of video calling and IM conversations. We also would have preferred an ExpressCard/54 slot instead of the PC Card slot, but many businesses will probably make better use of the older port anyway.

A 5000mAh, 6-cell, battery sits in the rear of the 2510p, and it powered the unit for 4hr 4min in our worst-case scenario, DVD-rundown test, with maximum screen brightness and a high-performance power profile. This is a great result; performing office tasks and with a power saving plan enabled, it should last you even longer. Inside the battery compartment is where the SIM card reader sits, but a 3G module is not built-in. If you want a built-in 3G module, you must specify this when purchasing the notebook.

The bottom line is that this ultraportable laptop is a sweet option for any business user who is looking for a lightweight yet fully featured unit with great battery life. Road warriors might want to opt for the 3G module, which, coupled with the relatively long period battery life of the unit, will be handy when travelling.