For businesses that need more than just the basic office machine, the HP Compaq 8100 Elite is compact and yet easy to maintain and use. It offers good performance, too.

HP's Compaq 8100 Elite is a small form factor (SFF) PC aimed at business users who need to do more than just word processing and e-mail. There are plenty of connections and it has a well-designed interior that makes it an easy desktop PC to maintain and expand. The only drawback is that it has a sluggish graphics card that makes it unsuitable for heavy graphics or video editing.

The HP Compaq 8100 Elite doesn't differ significantly from a typical small form factor PC; it has a rather Spartan design and unattractive faceplate. It's a little bulkier than the Dell OptiPlex 760.

For a business PC, the HP Compaq 8100 Elite offers a surprising number of connections; there are four easy-to-reach USB 2.0 ports on the front alone. There are six more around the back, along with two PS/2 connections, Gigabit Ethernet, VGA, DisplayPort and audio connections.

Bluetooth and Wi-Fi are both missing from the HP Compaq 8100 Elite, but mot business users are likely to connect to a wired network anyway.

The enclosure has an integrated speaker that is surprisingly loud, though not particularly high quality. Still, it's a useful inclusion for listening to presentations or online video; you just won't want to use it for music. 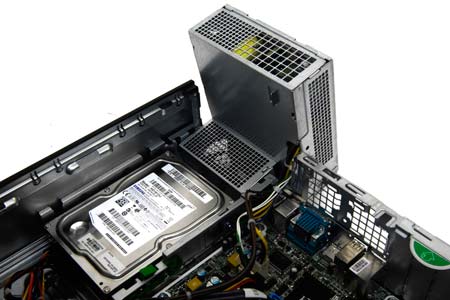 The inside of the case is surprisingly easy to manage for an SFF PC.

The case's interior is well laid out, making for easy maintenance and expansion. The hard drive and memory sit under the power supply and optical drive, both of which simply swing outwards on a hinge. This makes it easy to install a new drive, though we found it difficult to securely place the optical drive back in its proper position due to the thick SATA cables HP has used. Expansion slots include two PCI Express x16 slots, one PCI Express x1 slot and a PCI slot. You can only install low-profile rather than full height expansion cards due to the case's form factor.

HP offers a range of configurations for the Compaq 8100 Elite SFF PC, with a choice of either an Intel Core i5 or a beefier Core i7 processor. We reviewed the cheapest configuration — the WM193PA — but it's still nothing to sneeze at. You get an Intel Core i5-650 processor clocked at 3.2GHz, 2GB of DDR3 memory and a 7200rpm, 160GB hard drive. Graphics are integrated, and it runs 32-bit Windows 7 Professional, though a downgrade path is also provided to Windows XP Professional.

Our review unit already had the Windows XP downgrade applied so we couldn't test its performance in Futuremark's 3DMark Vantage benchmark suit, which requires Windows Vista or Windows 7. Nevertheless, in all other benchmarks, the Compaq 8100 Elite small form factor PC was a capable performer with key strengths in encoding media and other processor-intensive tasks. The PC's integrated graphics are sluggish, which make this is a poor option for heavy image and video editing work.