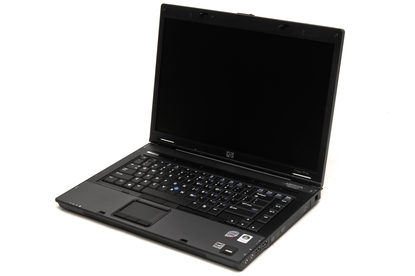 With plenty of power under the hood, the 8510p is perfect for pretty much any type of office work. It's very comfortable to use, has plenty of ports and long battery life. It's squarely aimed at the business market.

For professionals who require a large and robust notebook computer, HP's Compaq 8510p is a good candidate. It's solidly constructed, has a 15.4in screen with a large resolution, and it's very comfortable to use.

While it ships with a Windows Vista licence, the 8510p also comes with Windows XP Pro, which is handy for office environments that haven't made the switch to the newer operating system. But of course, this will depend on your situation.

We'll talk more about the hardware, because it really is impressive. Firstly, the keyboard: it feels rock solid and the keys have excellent travel. There is a large palm rest and the keys are full-sized so it's well-suited for touch-typing. For navigation you get a touchpad and a trackpoint device, and both can be used simultaneously. These were responsive and easy to use, and didn't get in the way while typing. What did get in the way was the fingerprint reader. If your palm accidentally hits it while you type, you'll see a little overlay on your screen telling to swipe your finger slower.

The overall build quality of the notebook is high; its base and lid feel very strong. The screen is well protected by the lid, which can withstand a good amount of forceful flexing; the base doesn't exhibit a lot of movement when it's squeezed and lifted from its edges. The base houses a DVD burner as well as a wide assortment of ports.

You get four built-in USB 2.0 ports, an HDMI port, FireWire, Gigabit Ethernet, a 56Kbps modem, a PC Card slot, a D-Sub port and an SD memory card reader. We would have liked a DVI port, too, but instead the 8510p has a D-Sub port. You probably won't need to plug in an external monitor (unless you want a dual monitor set-up) as the 15.4in screen has a native resolution of 1680x1050. It's perfect for coders who want to view a lot of lines on the screen, and its width also allows for two Web browser or office application windows to be placed side by side. We didn't have any trouble reading text from wide angles, but colour-shift was noticeable when viewing images and videos.

On the inside, the notebook has a 2.5GHz Intel Core 2 Duo T9300 CPU and 2GB of RAM, so it will handle everything from Microsoft Office to Adobe Photoshop with ease, and you can even do more intense work such as video editing and rendering on it. In Blender 3D, it took the dual-core CPU, using both of its cores, 1min 13sec to complete our test render. This is about 50sec slower than what a high-end dual-core PC such as the MegaPC MPC-Kalashnikkov (AK47) 4GHz accomplished, which is more than acceptable for a laptop. In the iTunes test, it took 1min 13sec, which is two seconds slower than we were expecting from the 2.5GHz CPU.

The T9300 is built using Intel's smallest transistors so it's fast and cool. Even with an ATI Radeon HD 2600 graphics adapter, and after running for more than two hours in our benchmarks, the unit's base didn't get overly warm, nor did any heat travel up through the keyboard. We also found it to be a very quiet unit. You can easily use this notebook in the silence of night and not get driven nuts by its cooling fan or hard drive. The fan will only spin at its maximum rate when you run games or other intensive applications.

Indeed, the notebook's ATI Radeon HD 2600 graphics adapter is powerful enough to let you run a few games. This will come in handy when you need to get away from it all, but it's also there to facilitate video output through the HDMI port. It seems that HDMI is now the digital output of choice for most vendors; one of its advantages is that it occupies slightly less space on the base. The HDMI port allows the notebook to be connected to a high-definition TV or projector and you can use the ATI Catalyst driver to scale its output to fit your screen perfectly. But let's get back to gaming. In 3DMark06, the Radeon HD 2600 card scored 3142, which means it will run most games well, except for newer titles.

Physically, the notebook is about 35cm wide and 26cm deep, and it weighs 2.7kg, so it's too big to use comfortably on public transport as you commute to work. If you do use it while on the go, it will last almost three hours. In fact, in our worst-case scenario test, the notebook's 37Wh (watt hour) battery ran a DVD movie for 2hr 44min before conking out. This was with the brightness turned all the way up and with the graphics card's power-saving feature switched off.

Watching movies on the big screen was a comfortable experience, although we did have to switch off the ATI driver's PowerPlay feature in order to watch movies smoothly while running on batteries. With PowerPlay enabled, the low performance of the graphics card meant that DVDs stuttered on the 1680x1050-resolution screen when viewed in full-screen mode.

The notebook also has great speakers, which can be used to good effect when you're giving presentations in a medium-sized boardroom, or when you watch movies and play games, of course.

Other features of the 8510p include a Smartcard reader, Intel's Active Management Technology, and a docking port. You also get 802.11 draft-n networking, Bluetooth 2.0 and a 200GB hard drive. Touch button controls let you manipulate the state of the wireless connection, as well as the volume, although we would prefer a rotary dial for the volume.

Some things we'd like to see added to this notebook are 'sleep and charge' USB ports similar to those on the Toshiba Portege M800 (PPM80A-03H009) and a webcam. The webcam would come in handy for Skype Video calls, for example. We could do without the pre-installed Symantec antivirus utility, but we appreciate the HP Backup and Recovery Manager software, which can be used to create an image of your system files, or even your whole drive.