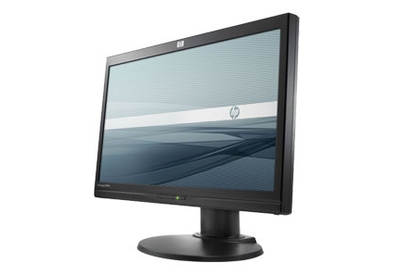 The sensitivity of the HP Compaq L2105tm touchscreen impressed us, and it has a sensible design. If you're setting up an interactive kiosk, we think this HP LCD monitor is a very attractive option. Just don't forget to wipe off the fingerprints!

These days you can't get the train, tram or ferry without seeing someone caressing their iPad or stroking the screen of their iPhone. Touchscreens are in vogue, and if you want your business to look like it's with "it" and is one of the hip kids instead of one of the geeky types who grow up to be tech journos, you should check out HP's Compaq L2105tm LCD monitor.

The HP Compaq L2105tm is a 21.5in, Full HD touchscreen monitor with what we think is an extremely attractive price: $499. It's definitely worth considering if your business wants to set up an interactive kiosk.

We tested the HP Compaq L2105tm LCD touchscreen with an HP Elitebook 8440p laptop. Set up is as easy as plugging in a DVI or VGA (D-sub) cable and a USB cord; Windows 7 did the rest (including starting up the operating system's on-screen keyboard). Of course, once the monitor is set up you're stuck with Windows 7's interface, which we're not fond of navigating with our fingers. The high-definition 1920x1080 (1080p) resolution doesn't help matters, though it does make the image look great. Thankfully you can use the included stylus for navigation; it offers much better precision and slots away neatly in the side of the monitor.

(As an aside, we briefly convinced a member of the Test Centre team that a plastic, one-metre umbrella spine was the included stylus. It was entertaining, trust us.)

The touchscreen is amazingly sensitive. Frequently, touchscreens in tablets, like the iPad, and smartphones, like the HTC Desire, are capacitive (activated by the touch of a body) or resistive (pressure sensitive). The former are generally more responsive if you're using your fingers, but the latter can be used with a stylus. The HP Compaq L2105tm disdains both of these technologies and uses "surface acoustic wave" (SAW) technology, which employs ultrasonic waves. We didn't notice any parts of the screen that were insensitive and touch input was accurately detected in our tests.

The touchscreen is multitouch-aware; this means you can use gestures to zoom in on a Web page, or rotate a photo (as long as your software supports it).

As a monitor, the Compaq L2105tm isn't particularly exciting. It could definitely stand to be a little brighter. The horizontal viewing angles were reasonably impressive, but the vertical viewing angles aren't fantastic — at least when viewing the screen from above. Viewing the monitor from below results in less loss of detail. If you're setting up an information kiosk and the monitor will be mounted on an angle, make sure you test how the display will perform before finalising the design of any housing. You'll also want to check lighting arrangements: it's a glossy screen and reflections can be irritating (we've seen monitors for which this is much more of a problem, however). Fingerprints look horrible on the glossy screen, and if you're going to watch a movie you'll want to give it a good clean.

Colours look great, and we watched some fast-paced movies without any issues. Contrast is reasonable: black levels were nice but highlights were a little dim.

The monitor has integrated speakers, but ideally their maximum volume would be a little louder. We think they'll probably be fine for a kiosk, as long as it isn't surrounded by too many noisy tourists.

The monitor's design is exactly as you would hope: a plain black bezel except for an HP logo. The panel is noticeably depressed into the bezel because of the SAW technology. The included stand can swivel and tilt, but you're more likely to ditch it altogether and mount the monitor on a wall or in a custom housing.

You'll only find the touchscreen useful if you have a suitable interface to work with (for example, a specially designed Web site on your intranet or a point of sale system with a touch-friendly design). Windows 7 just won't cut it, but then you wouldn't want to use a touchscreen for most office work anyway. Set the Compaq L2105tm up as a kiosk, or use it for running interactive presentations to impress clients.