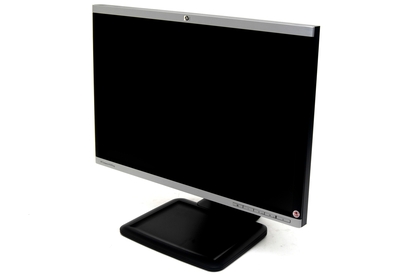 It's not perfect, but if you're looking for a basic work monitor the HP Compaq LA2205 will be hard to pass up for its flexible stand alone -- as long as you can find it cheaper than the slightly inflated RRP.

HP's Compaq LA2205wg is a relatively straightforward 22in LCD monitor, but its brushed aluminium highlights make it look like a premium product. Its flexible stand, glare-resistant screen and solid performance make it a decent buy.

With a brushed aluminium frame, HP's Compaq LA2205wg certainly doesn't look like a run-of-the-mill monitor. It has a stylish, professional look and the matte black sides and rear complement the overall aesthetic. Pushing on the edge of the bezel unfortunately results in distortion on the edges of the display, but aside from this minor issue the monitor feels sturdy and well built.

The HP Compaq LA2205wg's on-screen display is accessed via straightforward controls on the bottom right of the bezel. The buttons are easy to press and fairly responsive.

The HP Compaq LA2205wg's stand is one of its most impressive features. In addition to offering the regular tilt option, the stand is height adjustable, and also rotates 90 degrees. You'll need to tilt it first in order to fully rotate the screen, but the process is straightforward. A handle at the top of the LA2205wg's frame doubles does double duties for cable management, while the base can store your keyboard when not in use.

The screen itself has a matte finish, so it doesn't reflect any light and is ideal for regular office use. The display is set deep into the bezel though, so the edges of the screen often reflect onto the bezel, even though the bezel itself doesn't have a glossy finish. This is only a minor issue.

On the rear of the HP Compaq LA2205wg you'll find DVI, VGA and DisplayPort inputs, but the lack of HDMI rules this monitor out if you were planning to use it with the latest gaming consoles such as Microsoft's Xbox 360 or Sony's PlayStation 3. HP also includes two USB ports, but their location deep on the left side means you'll have to peer around the side of the monitor to access them.

The HP Compaq LA2205wg has a native resolution of 1680x1050, so it's not Full HD. The monitor performed adequately in our DisplayMate tests; brightness, black levels and colour reproduction were highlights. We also found no ghosting during fast movement in games or movies, despite the 5ms responsive time.

Like most basic TN LCD panels, there is slight backlight bleeding at the top and bottom of the screen, and viewing angles aren't great. Moving off-centre horizontally or vertically when using the monitor results in noticeable colour shift and darkening, and the image lacks the crispness of newer LED-backlit panels, such as the Samsung SyncMaster XL2370.