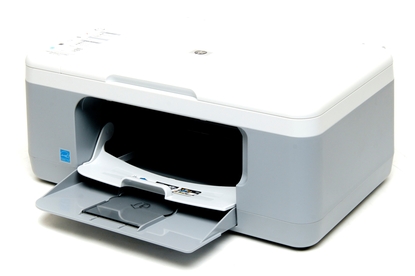 Even if you're looking for a cheap-as-chips multifunction, the F2280 isn't necessarily a compelling choice. It's slow and noisy, and text quality isn't that great. However, if you need a cheap solution for printing the odd photo then this unit does the trick.

HP's new entry-level multifunction comes with a bargain-bin price tag. For all the disappointment we felt with Lexmark's X2650, a side-by-side comparison with this multifunction shows the Lexmark coming out on top in speed and quality. The F2280 is cheaper to run, but if quality is a key consideration then it's best to pass on this printer.

Build quality is generally an afterthought when it comes to sub-$100 multifunctions, and the F2280 is no exception. The unit's scanner cover isn't fixed to the device and it is easily removed; we can't find any real use for this feature and it is sure to lead to a lost scanner cover in the presence of kids. The device's control panel has a bevy of LEDs that display printer status and copy settings, something that wouldn't have gone astray on Lexmark's X2650. We also appreciate the printer's use of a front paper tray rather than a rear one; this helps minimise the unit's footprint.

While the F2280 produces a lot of noise, it lacks speed. Standard text documents printed at an average 13.3 pages per minute in draft quality, slowing markedly to 4ppm in normal quality. Graphical documents with text highlights are slower again: draft quality documents average a speed of 7.7ppm and standard quality documents print at 2ppm. The X2650 clearly outshone the F2280 in photo printing speeds, with the HP printing taking 1min 30sec to print a standard 4x6in photo.

The F2280's consumables are fairly expensive: it runs at an average of 31.23c per page. While this is a marked improvement on the X2650, it remains incredibly expensive to run on a daily basis.

Quality is average for a printer at this price point, but the unit tends to overuse ink. The F2280 incorporates a new ink technology dubbed "dual drop volume", which is supposed to deliver laser-quality text and smoother colour transition. We noticed the latter, but it seems the laser quality aspect has gone astray. Text characters are clean and tidy, but are noticeably bolder than those from the X2650. While this doesn't affect readability so much, it seems that dual drop volume technology leads to an overuse of ink, making pages prone to smudging. Colours are much more accurate than blacks, with no real evidence of exaggeration to the same degree as text.

We were impressed with the F2280's photo printing. Blacks are remarkably well defined and reds are accurate, delivering realistic flesh tones. Whereas photos printed from the X2650 were riddled with vertical banding, photos from the F2280 were clear with no abnormalities. Although better print quality can be obtained from more expensive printers, the F2280's ability to produce reasonable quality photos at such a low price places it ahead of the X2650 in at least one respect.

Scan quality is adequate, but not the most accurate we've seen. Colours are often under-saturated and images are overly light, which affects scan quality in lighter images. Nevertheless, text is reasonably well reproduced.