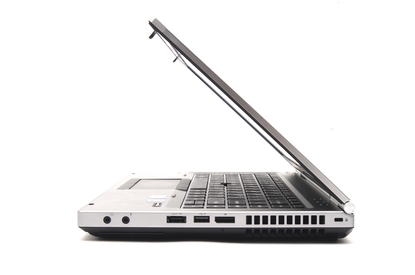 There's no doubt that the HP EliteBook 8460p is an excellent little laptop. It's fast, strong and offers good security options. It's also heavy for its size though, and definitely pricey!

With strong build quality, a fast configuration based on Second Generation Intel Core technology, and a large focus on security and management features, the 14in HP EliteBook 8460p (LW959PA) is almost a perfect business tool. But at $4099 it's a really expensive tool, too.

The exorbitant price brings lots of speed, but also peace of mind that's not found in many cheaper business laptops. Mainly, the EliteBook 8460p is a laptop with lots of security features — it's comfortable to use and it's solidly built. It has a semi-rugged design that conforms to mil-spec standards for dust, drop, vibration, altitude, humidity and high temperatures, so it should be able to stand up to some tough office and boardroom environments. At the very least, its spill resistant keyboard with drainage points will ensure that a coffee spill doesn't require a call to the HP support desk.

During our tests, we found the HP EliteBook 8460p laptop to be very rigid overall. Its magnesium-reinforced chassis could take a lot of downward pressure before bending. Likewise, its aluminium lid withstood a lot of force: only small puddles appeared on the screen when we tried to bend the lid and also when we applied torsional movement. Its hinges, too, are made of aluminium-alloy and they are rock solid. The lid locks in to the chassis when its closed using titanium-alloy latches.

While the EliteBook 8460p's body is very well built, the bottom access panel is surprisingly easy to remove. It is tool-less; all that's needed to remove it is to slide the release mechanism to the left until the panel comes forward. IT managers should love the ease with which they'll be able to quickly access the RAM slots, drive bay, CPU and communications modules. We're not sure it's a good idea for the panel to be so easily removable — even non-tech savvy users could do it. If the sliding mechanism isn't properly positioned, the cover can get loose, and we envision some funny scenarios where the notebook gets returned to IT with its panel missing. This is one time where we wouldn't mind having some screws holding the panel securely in place.

As a consequence of the EliteBook 8460p being so well built (and well featured), it's actually quite heavy for a 14in laptop. It tipped our scales at just over 2.4kg, which is about 400g more than we were expecting. It's almost as heavy as a 15.6in notebook, and it's also heavier than the 14in EliteBook 8440p that we reviewed around the same time last year. It can be a little tiring to carry around in a briefcase or backpack-style notebook bag with its power supply, which is a sizable power brick.

We found the EliteBook to have a good looking industrial design with square edges and a brushed metal finish. We love the contrast between its black keys and screen bezel and the silver chassis; all up, it looks retro-cool. We also love its understated white status LEDs at the front of the chassis, and also the orange LED that is used for the mute button. This and the white LEDs make for a nice change from blue, red or green LEDs on most other laptops.

The HP EliteBook 8460p's 14in screen has a matte finish, which means you won't be cursing reflections, and it sports a plentiful 1600x900-pixel resolution, which is enough space to line up two office documents side-by-side. However, the AMD Radeon HD 6470 graphics adapter and DisplayPort interface can be used to drive higher-resolution external monitors. You won't find consumer-minded ports such as HDMI on this laptop, but you do get USB 3.0 and eSATA, as well as Gigabit Ethernet, an SD card slot, FireWire, an ExpressCard/54 expansion slot and a smartcard reader; it even includes golden oldies such as a 56Kbps modem and a VGA port. You also get a DVD burner, although this can be replaced with a second hard drive or a weight saver.

Other features include Bluetooth, a dual-band Wi-Fi module (Intel Centrino Ultimate-N 6300 AGN) and an integrated 3G modem and SIM card reader (HP HS2340 HSPA). Its dual-band Wi-Fi worked like a treat during our tests, as did its 3G modem. We were able to use our iiNet SIM card, which runs on the Optus network, without any problems at all. After we plugged in the card, the Optus APN (access point name) appeared in Windows 7's wireless network list. HP supplies its own HP Connection Manager software, which allows you to see exactly how much data is going up and down via the mobile broadband connection, and it also allows you to send and receive SMS from the laptop.

A webcam is installed in the screen and it sits right next to a screen-mounted keyboard light. This light is similar to the one found on Lenovo's ThinkPad laptops, but it's nowhere near as useful as the one on Lenovo ThinkPads. It only illuminates the middle and top portions of the keyboard and only shines on those keys marginally stronger than the screen itself. Additionally, the way the light is positioned on the screen's bezel makes it slightly distracting. A backlit keyboard would be a lot more useful on this model.