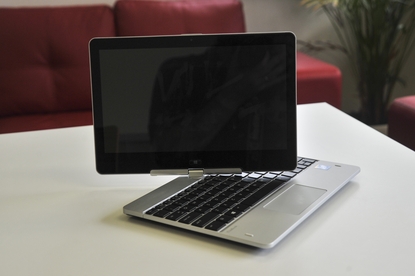 HP's EliteBook Revolve 810 G2 Tablet represents a good combination of both form and function. It can be used relatively comfortably as either a laptop or tablet, and the good thing is it's as powerful as a standard Ultrabook computer. Well worth checking out if you want a dual-purpose device for your business.

It has been a while since we’ve seen a hybrid notebook with a conventional design, but HP’s 11.6-inch EliteBook Revolve 810 G2 Tablet harks back to the days when tablet-convertible PCs had central hinges and screens spun around on the chassis. In a way, it’s refreshing to see this design still being used, and it’s implemented quite well in the Revolve, with a hinge that feels firm, yet reasonably smooth to operate.

As an EliteBook, the Revolve 810 G2 Tablet (model F6B48PA) isn’t aimed at regular consumers, but instead at business users who need a notebook that can be converted into a tablet with a minimum of fuss, and most importantly, without having a split design and removable (and losable) parts (in any case, the CPU power is not in the screen but in the base). It’s built out of magnesium, and this not only makes it feel very strong, it also makes it look attractive. HP says it’s designed to the MIL-STD 810G specification for temperature variations, shocks, particle exposure, and its keyboard is also spill resistant. Additionally, the touchscreen is protected by Gorilla Glass.

Despite the strong design, it’s not a completely enclosed unit, with the battery being easily replaceable from the bottom of the chassis, meaning that for field operations, a spare or two can be carried and swapped as needed (though there is no hot-swap feature). The removable battery also provides access to a micro-SIM slot, which allows the EliteBook Revolve 810 G2 to be constantly connected while on the go (if the optional 4G mobile broadband module is installed).

The Revolve 810 G2 tipped our scales at 1.38kg, which is hefty for an 11.6in unit, and it could get tiring to use as a tablet if you have to carry it around for prolonged periods of time. When oriented as a tablet, the thickness is about 22mm, but there is a lip at the top of the unit (where the hinge is) that makes it a little easier to hold than if you had to wrap your hand completely over the screen.

There is a physical Windows Home key at the top of the screen, while the right side of the unit contains physical volume buttons and sliders for the power switch and auto-rotate toggle. We like the use of spring-loaded sliders rather than regular buttons, mainly because it means they are not easy to trip by accident.

All of the ports for this unit are located along the spine, which becomes the top when in a tablet orientation if you hold it the way it is intended. These ports include Gigabit Ethernet, USB 3.0 (two of them), full-sized DisplayPort, and the power connector. These are good enough to allow the Revolve to be used on a desk with a high-resolution monitor and external input peripherals, but there is also a docking connector that allows for HP’s UltraSlim Docking Station to be attached. This offers more USB 3.0 ports (four of them), Ethernet, two DisplayPorts, VGA, line in and line out. The right side of the Revolve also has a headset port and a microSD card slot.

Since the USB ports are located at the back and can’t be seen when you use the Revolve as a laptop, it’s easy to forget about them. This means that if you have a thick USB stick plugged in, and then you try to rotate the screen to get into tablet mode, you could end up hitting the USB stick. Some caution will be needed. You might have to unplug some devices before turning the screen.

While the hinge that rotates the screen is a strong one overall, we found it to be a little too loose in its tilt mechanism. When we moved the laptop around, the screen would sometimes drop back on its own. It’s not a major problem, and it can depend how far back the screen already is and how quickly you move the unit. In tablet mode, a magnet keeps the screen planted firmly against the base. It doesn’t bobble around or float.

The screen itself has a native resolution of 1366x768, and it’s a screen with wide viewing angles and decent overall quality. We found it to be rich and reasonably bright. Since it’s a touchscreen with Gorilla Glass in front of it, it is a very glossy screen, and this could be annoying in an office depending on your environment. The 11.6in size tends to mask reflections better than a bigger screen, mainly because you can angle it a little tighter, though we did still find them annoying when looking at predominantly dark images.

When using the Revolve as a tablet, the screen was responsive for actions such as using Windows 8’s settings and Modern UI apps. Text didn’t look as sharp as we would have liked, though we have been looking at lots of laptops with higher pixels per inch lately (the HP Spectre 13 Pro being one of them).

User comfort is good despite the notebook being such as small size. We found the keyboard to be easy to type on for long periods of time, while feeling only slightly cramped. The touchpad gave more of a cramped feeling since it is only 91x47mm, though we adjusted to it in the end. It supports two-finger scrolling, three-finger flicks, and you can use Windows 8 swipe-in gestures if you wish.

We love the feel of the keyboard’s keys. They are very soft, and even though they don’t have a lot of travel, they feel adequately responsive. Furthermore, they are among the quietest keys we’ve ever hit. You could use this notebook for prolonged typing sessions in an exceedingly quiet environment and not bother anyone at all. The keyboard’s backlight provides good contrast for the lettering against the black keys, and has a couple of intensities to choose from. The only things we hate about the keyboard are the very small left- and right-arrow keys, as well as the small Function keys.

Its performance was swift throughout our test period, whether we used it for typical Desktop tasks, or for running Modern UI apps, and it was also quite a capable unit for tasks such as editing and processing photos (though the relatively small resolution of the screen wasn’t great for that). In Blender 3D, it got a time of 44sec, which is actually a couple of seconds faster than what the Lenovo ThinkPad X1 Carbon recorded with the same CPU. It was slower than the Carbon in the 3DMark Cloud Gate and Fire Strike tests, though, recording 3821 and 489, respectively, while the Carbon got 631 and 4536. The Carbon had the benefit of 8GB of RAM.

Even while the Revolve was processing 3D graphics, it didn’t get too loud. It has a fan installed that pushes air out through a vent on the left side, and while you can hear a low whirring, it’s not overly loud or annoying. The chassis only got slightly warm when we used the Revolve in our lap, but it wasn’t an uncomfortable level of warmth. There are vents at the bottom, though, so if you rest the Revolve on a soft surface and these are blocked while the CPU is working hard, then it could heat up a little more than usual.

In CrystalDiskMark, the HP Revolve’s SSD put up a read rate of 497.5 megabytes per second (MBps), and a write rate of 306.3MBps. These are very good results, and we’re especially keen on the write speed. It’s one of the aspects of the notebook that makes it feel so responsive, especially while loading applications and managing files. If you need more storage space, an SDXC card can be installed in the microSD cars slot on the right side. Large video files were copied off our 16GB SanDisk Extreme microSDHC memory card at a rate of 80MBps (70MBps for hundreds of photo files), and written to it at a rate of 31MBps (24MBps for the photo files).

Battery life was not too shabby overall during our tests. For regular usage, where we just browsed the Web, did some typing, watched 30min worth of streaming Flash video, and kept the brightness at a medium level while using the ‘HP Optimised’ power profile, the Revolve’s 44 Watt-hour battery lasted just under seven hours.

A similar time was recorded in our video rundown test, in which we disable power management, enable Wi-Fi, maximise brightness and loop a video file; the laptop lasted 7hr 8min in this test. How long it will last for you depends on the applications you run, for how long they run, and what your screen and power settings are. Mobile broadband will also drain the battery quicker. Charging time was about 1hr 30min to reach 80 per cent capacity.

Other features of the HP EliteBook Revolve 810 G2 Tablet include NFC (which didn’t work with our Samsung Galaxy S4 in our tests), Bluetooth 4.0 (which was useful for streaming music to our Bluetooth-enabled Rotel amplifier), TPM 1.2, a vPro chipset, and 802.11ac Wi-Fi. The Wi-Fi signal was erratic when connected to our Belkin AC1800 router using the 5GHz band, with average transfer rates being 20MBps. The same Wi-Fi module in the HP Spectre 13 Pro, when connected to the same router and using the same network environment, recorded a much better 38MBps.

You don’t get a fingerprint reader or a Smart Card slot, and these aren’t options. You do get a password manager and drive encryption, as well as authentication for devices that are plugged in.

Overall, this is a good unit that performs both notebook and tablet tasks without much compromise. It’s comfortable to use as a notebook if you don’t mind the 11.6in form factor, and it’s equally comfortable to use as a tablet if you don’t mind the overall weight being significantly more than a stand-alone tablet. You get good performance and battery life, decent connectivity, and the port expansion option is useful for office docking.

Its price of $2199 puts in the same company as many high-end touch-enabled Ultrabooks, but it’s worth checking out if you want a device for your business that has touch and can actually be used in a proper tablet form factor.