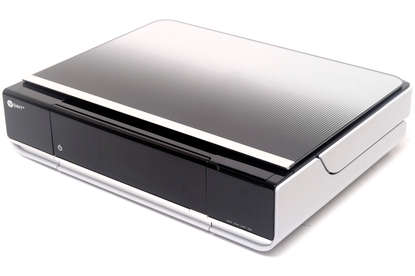 If you're a home user with moderate printing needs, HP's Envy 100 e-All-in-One inkjet multifunction is one of the best printers designed for home use that we have tested in 2010. Its quiet operation, intuitive printing, and stylish design will make it a welcome addition to your home office. It prints documents and photos at acceptable but not high quality levels and its printing speed is a tad slow for our liking, but for a casual user it offers an good range of extra features.

The HP Envy 100 e-All-in-One is a multifunction colour inkjet printer that is stylish and quiet — it's designed to fit in your living room. We would still prefer to keep it stashed in a home office, but for a multifunction printer it has one of the best designs we've seen. It's not the best A4 photo printer we've tested due to its use of a tri-colour ink cartridge, but when printing text it does an acceptable job. Its low-noise design means it prints slowly in normal quality modes, though. A swathe of extra features and Internet connectivity means this printer outperforms its competitors by adding extra value. 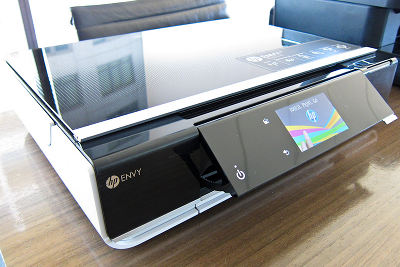 The HP Envy 100 e-All-in-One has a motorised 3.45in colour touchscreen that automatically tilts upwards when the printer is turned on.

The HP Envy 100 e-All-in-One is a printer that was designed from the ground up to be used in a home setting. It's obvious a lot of thought has been put into this printer's construction — it shares its Envy name with the company's premium HP Envy 13 and HP Envy 15 notebooks. It is significantly smaller than similar printers from its competitors like the Canon PIXMA MG5250 inkjet multifunction, and measures 427 x 336 x 102mm.

When it was announced, HP told PC World that the Envy 100 printer was smaller, more attractive and quieter than the company's older models, and that it wouldn't look out of place in a modern living room. We probably wouldn't keep this multifunction inkjet printer next to the fine china and family photos, but its design certainly fits in better than any other printer we've recently reviewed.

The hinged flatbed scanner cover on the top panel of the HP Envy 100 printer is made of glass, and it is finished in a shiny mirror coating decorated with an attractive gradient of black dots. This A4 inkjet printer's paper cassette is hidden away in the base of the printer. It's accessible from the front and it can hold 80 sheets of plain A4 paper — less than many of the other home printers we've tested, but enough for moderate use. A 3.45in colour touchscreen on a motorised panel houses the printer's controls and you can use it to access HP's ePrint Internet services. Direct printing off a USB, SD as well as other memory cards is available via a flip-up panel on the HP Envy 100 e-All-in-One's front.

If you're so inclined, you can use the HP Envy 100 e-All-in-One printer to download and run HP ePrint applications. It requires a certain dedication to regularly walk up to your printer, choose some fun sudoku charts and colouring-in pictures, and print them — but the extra features and diversity of available applications may be a drawcard for families or tech-savvy users.