The HP Envy 110 is stylish and competent, but it's also pricy 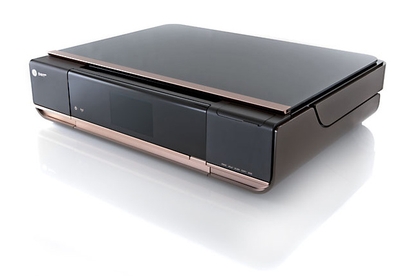 If a good-looking product is paramount to you, then the elegant Envy 110 MFP may be just what you seek--but this model is expensive.

Pricing in this review is in US Dollars. The HP Envy 110 won't be released in Australia until January 2012, and pricing hasn't been released but we expect it will be in the $299-$349 price range. We loved the HP Envy 100 when we reviewed it last year, and the Envy 110 will likely be as impressive.

The HP Envy 110 e-All-in-One inkjet multifunction printer looks like a classy VCR, acts like a Transformer toy, and prints magnificent photos. It's also fully equipped for cloud printing. Is all that enough to make you forget its costly inks? Aesthetically oriented home and small-office users who don't print much might be willing to make the trade-off.

Virtually everything on the Envy 110 e-All-in-One is designed with looks in mind. It forgoes basic black for a dark-mocha casing with copper-colored metal accents. Thanks to its extremely low profile — just 4 inches high — it can sit discreetly on a deep shelf. When needed, the motorized control panel tilts upward, and the arm that catches the paper swings outward; otherwise, they tuck neatly into the machine's smooth chassis. Another classy touch is the hefty scanner lid, which slowly settles into place rather than slamming when you let it go. Everything on the printer feels rock-solid — an increasingly rare attribute when it comes to any printer, let alone a consumer model. The solid construction also makes the Envy 110 quieter than most printers.

HP makes setting up the US$249 (as of October 12, 2011) Envy 110 e-All-in-One easy. We chose Wi-Fi; USB is also available. The very attractive HTML-based interface lets you access printer settings across the network using your browser. The software bundle includes Photo Creations and HP Scan, which are both capable and attractive applications.

The control panel is wide and flat, with contextually lit controls (they light up only when needed). The 3.45-inch (8.75cm) LCD touchscreen offers a crisp picture and good response, though one might argue that HP tries to fit too much information on each screen.

The Envy e-All-in-One prints, copies, and scans, but doesn't fax. USB/PictBridge, SD Card, and Memory Stick slots are included for printing directly from flash memory. With the focus on looks and a sleek profile, the Envy 110's paper handling is, not surprisingly, low-volume. Although automatic duplex printing is standard, the bottom-mounted input tray holds only 80 sheets, and the output arm holds just 25 sheets. The worst compromise is the non-telescoping lid on the letter/A4 scanner bed. The design doesn't put much of a margin between the glass plate and the edge of the cover, so it allows in more light than usual; it created shadows around our magazine scan. Such shadows are easily cropped, but in our tests they seemed to fool the scanner software's automatic-crop function.