Envy its speed and good looks, not its price tag Admire the HP Envy 13 for its sleek looks, solid build quality and fast speed, but not its price tag.

HP's Envy 13 is a 13.1in notebook with an Intel Core 2 Duo L9600 CPU and 3GB of DDR3 RAM that runs the 64-bit version of Windows 7. It's designed specifically for users who want something stylish, well built, and fast yet small. But it's hardly good value.

Let's start with the obvious: at $3799, the HP Envy 13 is an expensive notebook. It's even more expensive than a top-of-the-line, 17in MacBook Pro ($3299). It costs so much because of its stylish design and the relatively powerful components within its small 13.1in body. It's a notebook-as-status-symbol, for people who have the money to splurge and want to match the Mac folk when it comes to looks.

In fact, the HP Envy is inspired in many ways by the design of the MacBook; from the isolated keys and the big touchpad, to the power connector and the clean curves of the SD card reader. There is plenty there that evokes aspects of Apple's notebooks, and as far as PC notebooks are concerned, it's definitely one of the better looking models on the market. It's also one of the sturdiest.

The Envy 13's power connector (left) looks similar to that on the MacBook, but it's a different shape and not as easy to remove.

Do these curves look familiar? The Envy 13's SD card reader on the left, and the MacBook's DVD slot on the right.

The chassis is made of magnesium alloy and aluminium and it feels extremely strong. It's only 2cm thick, 32cm wide and 21.5cm deep, and it weighs around 1.7kg. The base barely budges when you apply substantial pressure to it, and the screen doesn't puddle when you bend the lid. There is an edge-to-edge protective cover over the LCD screen that makes it look very clean. It's a reflective surface but the screen is very bright, so you can see it almost perfectly. HP claims that the Envy 13 has the brightest screen of any 13in notebook on the market. We can confirm that it's bright enough to be viewed comfortably when in sunlight.

Other little things make the HP Envy's design stand out: you can open the lid with one hand without the base lifting up; its hinges are very smooth and hold the screen perfectly in place; and the battery resides on the underside of the notebook instead of the spine (which gives the notebook a compact look). Despite the battery's location you can upgrade it by purchasing an optional battery "slice"; this will increase the notebook's overall thickness, however.

We understand the need to keep things simple on a notebook like the Envy 13, but it actually has less ports than a lowly netbook. You don't even get a Gigabit Ethernet port (although it does have 802.11n wireless networking and a USB-to-Ethernet dongle), nor an ExpressCard slot, and the laptop only has two USB 2.0 ports. There's no option for a port replicator or a docking station, so if you're a power user — the type of user this notebook is aimed at — who needs to use external peripherals, a USB hub will be required.

Another omission is a built-in 3G module. For the amount of money you are paying, an integrated module that works with any carrier would be welcomed; instead, you have to use a USB dongle if you want to access the Internet while on the road, or tether your iPhone via Wi-Fi.

The small number of ports contributes to the understated design of the Envy 13. It has clean lines and curves, a bronze and silver colour scheme, and no unnecessary lights. The only lights on the laptop are small and used to indicate power and essential information, such as whether the speakers and wireless card are disabled. HP has even resisted the temptation to install a glowing HP or Envy logo on the lid (unlike a MacBook and its Apple logo); the only way you even know it's an Envy 13 is from the small writing at the top of the screen. You don't even get a backlit keyboard. The only extravagance is the laser-etched pattern on the palm rest. 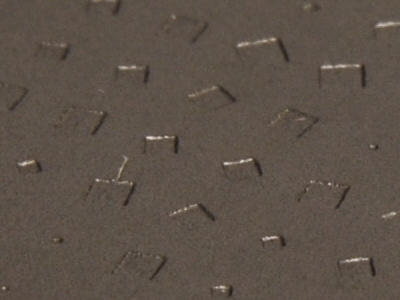 A close-up of the laser-etched pattern on the Envy 13's palm rest.

We love the design of the keyboard and the touchpad. The touchpad is made out of a relatively soft material and feels almost Teflon-like when you move your finger across it. It's close to being the best touchpad we've used on a Windows-based notebook. It's big and the left- and right-click buttons are concealed underneath it. You can still use this part of the touchpad to navigate the screen. It doesn't feature the cool gesture support that the MacBook does, so you can't quickly pinch your fingers to zoom in on photos. This is a bit of a sore point.

The keyboard has isolated keys that are 15mm wide and 4mm apart, and they feel very solid when you hit them. Touch typists in particular will appreciate the tactile feedback. The Function keys are swapped around so that you don't have to hold the Fn button in order to switch off the wireless module and change the brightness (you can change this in the BIOS). One thing that's annoying is the lack of Home, End, Page Up and Page Down markings on the keys.

Some of the extra features on the Envy 13 include HP's QuickWeb 2.0, which is a Splashtop-based operating system that enables you to use the Internet, browse photos and listen to music. It resides on a motherboard chip instead of on the hard drive, and it boots about four times faster than Windows 7. The implementation of QuickWeb 2.0 is better than the one we saw on the HP Mini by Studio Tord Boontje netbook — we didn't have any problems using the touchpad to navigate and double-click. 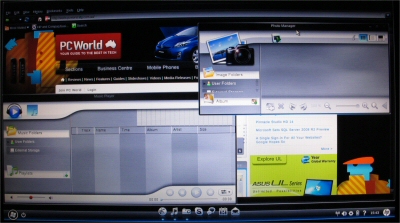 QuickWeb 2.0 is implemented nicely and is a great way to browse the Web without booting Windows 7

Another useful feature is CyberLink's Recovery Manager, which makes it easy to restore the system to its factory settings, back up files or troubleshoot the notebook. The bad part is that with all the software HP preloads onto the system (such as Norton Internet Security), it will take almost an hour to complete the recovery process. Then you have to click your way through a further HP setup program to 'personalise' your notebook. In this case, 'personalisation' includes registering the notebook, setting up automatic updates and alerts and turning on Norton Internet Security.

The Envy 13 is powered by an Intel Core 2 Duo L9600 CPU, which is a low-voltage dual-core CPU that runs at 2.13GHz. It's supported by 3GB of DDR3 RAM, ATI Mobility Radeon 4830 graphics and a 160GB solid-state drive. This configuration allowed the unit to amass a score of 103 in our WorldBench 6 benchmark suite, which is a very fast result for a laptop. It means it will not only let you browse the Web and edit documents with ease, but you'll also be able to use it comfortably for photo editing (as much as the screen's 1366x768 resolution will let you), and you can even use it more advanced tasks such as video editing if you wish. The notebook's MP3 encoding time of 1min 14sec is almost exactly the same as the ASUS N61Vn's time, while its Blender 3D result of 1min 23sec is the same as HP's ProBook 4310s. So you can see that it's easily able to hold its own against much bigger laptops. The drive speed of the Envy 13 is also fast for a 13.1in laptop, recording 28.64 megabytes per second in our file transfer tests.

HP has included switchable graphics in the Envy 13, which allows you get the most out of its battery. This means that you can use the ATI Mobility Radeon HD 4830 graphics card while you're at home or in the office, and you can switch to the less powerful Intel GMA 4500 graphics while you're on the road. In 3DMark06, the ATI chip recorded 3086, while the Intel chip recorded 782, so there is a huge difference in processing power between them. You can switch between the two graphics cards by right-clicking on the desktop and selecting 'Configure Switchable Graphics' and you won't need to restart the computer for the changes to take effect.

In our tests using the ATI Mobility Radeon HD 4330, the HP Envy ran for 1hr 52min on its battery, which is acceptable. Our battery tests involve switching on Wi-Fi, disabling power management schemes and cranking up the screen's brightness to maximum, so in the real world you're likely to get more life out of the battery. Using the integrated Intel graphics, the Envy ran for 2hr 11min. That's not a huge difference, but if you employ a balanced power saving scheme, switch off the wireless radio and tone down the screen's brightness, it will last up to 30min longer.

Despite its excellent speed, our verdict on the Envy 13 is that there really is no need to be envious of anyone who owns one. There are notebooks on the market from other vendors that offer you similar performance and many more features for much less money. The Satellite U500 is the obvious choice for around $1999, even though it has a slower hard drive, is slightly heavier and isn't made out of metal. However, the Envy 13 does shine when it comes to performance and build quality, so if those two features are of the utmost importance to you, and price is no object, then the Envy 13 can be considered.