With great styling, a solid build quality and Beats by Dr Dre headphones, the HP Envy 14 Beats Edition notebook is hard to resist. It's the type of notebook you buy when you have deep pockets, a need for a powerful laptop, and you want to stand out from the crowd. That said, it's not perfect, and it could still use a few more features to make it a killer notebook.

There is a lot to like about the HP Envy 14 Beats Edition. For starters, it looks great! Its dark lid, silver base and red Beats logo give it an identity that's sure to stand out in the crowd; secondly, it has a very sturdy build quality and it feels great to use; thirdly, it has an Intel Core i7 CPU and 4GB of DDR3 SDRAM in it, so it can handle practically any task you throw at it. However, despite being a notebook that's aimed at DJs and music lovers, its audio adapter isn't great: it doesn't have a comprehensive settings panel and it also lacks an analogue line input. Also, at 2.55kg, it's a comparatively heavy notebook.

When you lift the lid on the Envy 14 Beats Edition, you are greeted by a 1366x768-resolution LCD screen that has edge-to-edge glass, a chiclet-style keyboard with red-backlit keys, and a huge touchpad with left- and right-click buttons that are hidden beneath the actual pad. The palm rest is large and it has a grippy texture that feels very comfortable to use when typing. The keys themselves are soft and it doesn't take much effort to press them. We love the red backlight — it looks great when you use the notebook in the dark.

The screen is glossy, but it isn't as reflective as the screens we've seen on other glossy notebooks. We also wish that the screen had a larger resolution (perhaps a Full HD resolution), which would come in handy if you were to use this notebook for editing and sequencing audio.

In terms of performance, because the Envy 14 uses a relatively low frequency 1.6GHz Intel Core i7-720QM CPU, its straight-line speed isn't as good as CPUs that run a faster clock speed; this was shown in our iTunes MP3 encoding test, in which the Envy 14 Beats Edition recorded 1min 19sec. Laptops with faster clock speeds, such as Toshiba's 2.4GHz Core i5-520M-based Portege R700, recorded a time of 1min in this test; Acer's 2.6GHz Core i7-620M-based TravelMate TimelineX 8572G recorded 54sec. However, as the Core i7-720QM has four cores plus Hyper-Threading, it comes into its own when running multi-threaded software and when multitasking. In the multi-threaded Blender 3D test, the Envy 14 recorded a time of 47sec, which is better than the 50sec of the Acer TravelMate TimelineX 8572G and 59sec of the Toshiba Portege R700.

It wasn't very fast in our Xvid encoding test, in which we use AutoGordianKnot to transcode a DVD file to a 1.5GB Xvid file: it recorded 1hr 15min in this test, which is about 15min longer than we expected. The hard drive in the HP Envy 14 Beats Edition is a 5400rpm Western Digital Scorpio with a spin speed of 5400rpm and a capacity of 640GB (595GB formatted). It recorded a transfer rate of 27.17 megabytes per second in our tests, which is a speedy result.

The graphics adapter in the Envy 14 Beats Edition is an ATI Mobility Radeon HD 5650, which provides good mid-range performance. In 3Dmark06, it recorded a score of 6980, which means that apart from some demanding first-person shooters, you should be able to play most games smoothly when you set them to run medium graphics details. 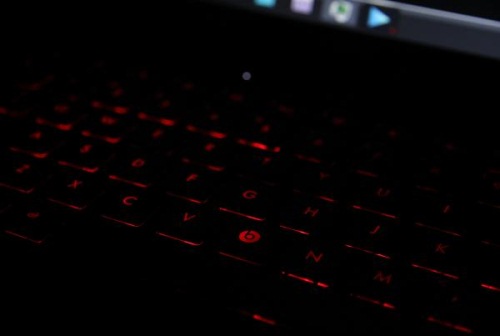 The notebook's red-backlit keyboard looks great and is very useful when using the notebook in the dark.