A Windows-based NAS device that's easy to use The HP EX490 MediaSmart Server brings set-and-forget storage into the home, with a Windows operating system and automatic backups. It's definitely easy to use, though the limited configuration options can be frustrating for tech-savvy users.

HP's EX490 MediaSmart Server is a reasonably priced network-attached storage device that runs Windows rather than the Linux-based operating systems most competitors use. This makes it easy to share videos and music over your home network, as well as back up your PCs. However, this NAS lacks the flexibility and performance of competitors.

The HP EX490 MediaSmart Server doesn't depart significantly from the look and feel of other NAS devices. It's quite big and bulky for a four-bay NAS, but it certainly isn't the ugliest one we've seen. The drive bays sit horizontally behind a panel door, and can be locked in using a flat-head screwdriver.

The drive trays won't accommodate 2.5in hard drives but they are tool-less, making for easy drive installation and replacement. We felt the trays seemed somewhat flimsy however, and could be difficult to remove from the enclosure. Both internal and external drives on the EX490 MediaSmart Server are hot-swappable, though the NAS device requires access to its primary system volume at all times. Pull it out during operation and the console will crash, barring access to the NAS device until it is restarted with the primary volume intact.

The HP MediaSmart Server offers a single USB port on the front, and lacks a one-touch copy button for easy backups. Around back there are three more USB ports, a single Gigabit Ethernet jack and one eSATA port, which will allow for faster transfers from compatible external hard drives.

The HP EX490 MediaSmart Server is powered by a 2.2GHz 64-bit Intel Celeron processor and 2GB of DDR2 memory. While more powerful than the current crop of Atom-powered NAS devices like the Thecus N4200, it won't survive a blow-to-blow fight with QNAP's Core 2 Duo–based TS-809.

The NAS device comes bundled with a single 1TB 3.5in hard drive, leaving three bays for installing your own storage. The default configuration consumed an average of 47.5 Watts during testing, and 38W when idle.

Most current NAS devices are based on some form of Linux, often with an Ajax-based Web user interface for administration and configuration. The EX490 MediaSmart Server, on the other hand, uses Microsoft's Windows Home Server — an operating system based on Windows Server 2003 and tweaked specifically for use on NAS devices.

A Windows-based NAS means you get greater compatibility with Windows XP, Vista and 7, including automatic backup configuration when you set up the HP NAS device on each computer. However, it also means that support for other operating systems — like Mac and Linux — are left to third parties. HP has enabled Mac support for the EX490 MediaSmart Server by adding Time Machine backup support as well as iTunes media streaming and remote desktop connection software that allows you to configure the NAS device. However, even here you'll need at least one PC on the local network for initial configuration.

Though the HP EX490 MediaSmart Server offers a Web-based interface, all server configuration is actually done through the Windows Home Server Console, which must be installed on the PC. The software has a similar layout to the interfaces of other NAS devices, but with a look and feel that will be instantly familiar to Windows users. From here you can administer users and share folders, and maintain backup schedules for computers, though the options for each component are limited.

You won't find too many business-focussed features like iSCSI, rsync backups or even remote replication. Network protocols are limited too, with no NFS or AFP/Bonjour options for Apple and Linux environments. 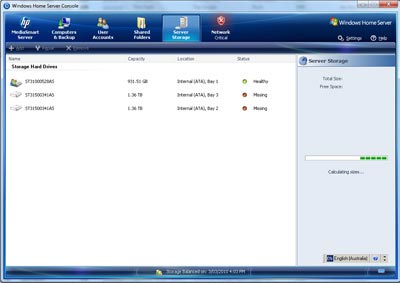 Since Windows Home Server is built for non-business environments, the software is focussed on automation and simplicity rather than flexibility. Storage, for instance, isn't configured in the same way many would be used to on computers or other NAS devices. Instead, it's controlled by Windows Home Server Drive Extender. Like a standard JBOD or concatenation configuration, this treats all storage devices as a single storage pool rather than individual volumes. This means you can connect any internal or external storage device and add it to the pool from within the console. Windows Home Server automatically accounts for drive redundancy, so you won't lose your data if one drive is disconnected or dies. This certainly makes storage extremely simple for users who aren't tech savvy but, at the same time, it limits storage performance (more on that later).

The console's options are simplified, which makes things easy for those who aren't used to the wide, scary world of NAS devices. The DLNA-compliant UPnP server is powered by TwonkyMedia but you won't have to tread into the typical Web interface; all configuration is done with the comparatively pretty-looking console instead. Installing an additional piece of software tightly integrates a client PC's Windows Media Centre application with Windows Home Server, automatically adding any media on the EX490 MediaSmart Server into the Windows Media Centre client.

It's surprisingly easy to enable remote access to the HP EX490 MediaSmart Server, too. The NAS device will automatically configure port forwarding and allow you to sign up a dynamic DNS host through either Windows Live or TZO.com.

HP adds other software features to the EX490 MediaSmart Server on top of the Windows Home Server basics. These include Media Collector, Photo Publisher and Video Converter, though the last of these performs particularly slowly.

Updates aren't as frequent as those offered by some NAS manufacturers, but it is a painless process thanks to Microsoft's refined automatic updates system.

The console is useful but it does little that couldn't be accomplished within a browser. It's slow, too; we regularly had to wait several minutes between each mouse click as the NAS device tried to catch up, despite being connected over a Gigabit Ethernet network. This makes some configuration process a painful one.

We tested the EX490 MediaSmart Server's default configuration (with a single 1TB hard drive) connected through a Gigabit Ethernet network to a testbed PC with a 300GB Western Digital Velociraptor hard drive. We run Intel's NAS Performance Toolkit, which determines how the NAS device performs when streaming 720p high-definition media from the device as well as the ability to record the same video while performing backup operations.

Because the HP EX490 MediaSmart Server essentially uses a JBOD drive configuration with redundancy, it won't match the performance of similarly powerful NAS devices that have a RAID 0 option. It performed capably, though was understandably slow in most tasks. The closest comparison is QNAP's TS-419P Turbo NAS, which it managed to surpass in most tasks. However, for the most part it was significantly slower than other four-bay NAS devices.

That said, the EX490 MediaSmart Server's file transfer performance will suffice for overnight backups, and it's even suitable for streaming high-definition content over a Gigabit Ethernet network. However, more intensive and simultaneous tasks will likely put a little too much strain on this HP NAS device, making it more suited to single users and families.