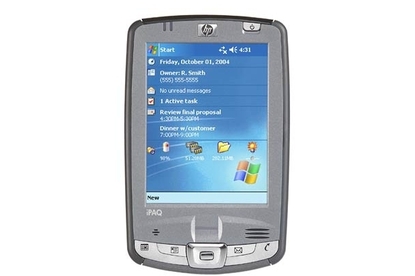 This PDA is fast, powerful, and equipped with both Bluetooth and Wi-Fi, but the biometric fingerprint reader doesn't work as well as it should.

HP's iPAQ Hx2755 packs plenty of processing power and RAM, and its simple design makes it easy to use. The unit's most notable shortcoming, though, is also its most distinctive feature: a biometric fingerprint reader.

The Hx2755, which runs Windows Mobile 2003, comes with Intel's powerful 624-MHz Intel PXA270, which handles standard applications without breaking a sweat. The 128MB of internal RAM (up to 80MB is available to the user) stows a fair amount of data, and you can use appropriate media cards in the CompactFlash and SD Card slots as well. In my informal tests the rechargeable lithium ion battery ran for nearly 6 hours of light use before shutting down.

The substantial, smooth-edged Hx2755 sits comfortably in the hand and is simple to use. With only four buttons--Calendar, Mail, and a two-part mouse button--this device wastes no space. Syncing to a PC using the included USB cradle was a breeze, and the built-in Bluetooth and 802.11b Wi-Fi were easy to set up and to access from the iPAQ Wireless screen.

Our test unit, however, had a few design flaws--including a rather significant one that makes the device frustratingly hard to turn on. The power button, which sits in a small recess at the upper edge of the device, was difficult to operate. Looking at it, I couldn't tell whether I was supposed to press it like a button or nudge it like a switch. I tried both, and had greater--but not total--success with pressing the button. Sometimes neither action worked, and I'd have to resort to a soft reset to get the device started.

With the clear, smoke-grey cover snapped on and flipped down over the screen, the buttons, the fingerprint scanner, and the colour screen remain visible but inaccessible. This may be handy when the PDA is stowed in a pocket; but if you're about to fire up the device, you'll probably want to snap the cover off.

I also had trouble with what should have been this PDA's star feature: the biometric fingerprint scanner. Despite the scanner's solid (though mostly PDA-based) documentation and ample training, I had a devil of a time persuading the Hx2755 to consistently recognize my right index finger. Even slight variations in the angle at which I touched my finger to the scanner caused incorrect readings. Once I had failed enough times, the device let me log in with the PIN I had previously set up. Though it's lucky that I had created this fallback log-in method, using it required me to set up the fingerprint reader all over again.

Fortunately, setting up file encryption--Lite, AES, Triple DES, or Blowfish--is a simple matter of selecting check boxes, so you can encode as many or as few of the folders as you like.

Software on the Hx2755 is pretty standard, including ActiveSync, MSN Messenger, Pocket Word, and e-mail software. I listened to music played on the included Windows Media Player 9 through the speaker; sound quality was acceptable. The Hx2755 also includes HP's Image Zone software for viewing digital images.

However, you may want to think twice about showing off your vacation photos on this device. JPEG photos looked only average on the Hx2755's screen; although colour was pleasing, details didn't look terribly crisp, and a light grid made every image look as if it were showing through a window screen. In bright sunlight, colours became almost indistinguishable.