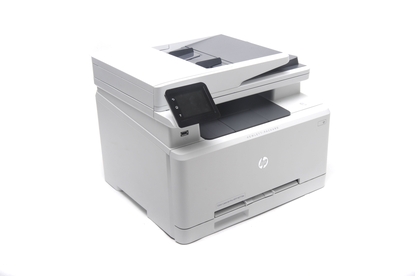 The relatively compact size of HP's LaserJet Pro M277dw is a little misleading. It's a laser-based multifunction colour printer with a gutful of new tech that aims to make it a more efficient performer in terms of speed and energy consumption. It's also heavier than it looks, so you'll probably need four arms and legs to move it from its box to its final resting place in your office.

Chemistry advancements to the toner

What makes the LaserJet Pro M277dw special is a redesign of its toner cartridge technology. The toner particles have a new chemical makeup that allows them to be fused to the paper with less energy than before, while at the same time retaining their robustness. Basically, each particle has been made softer to facilitate a lower melting point, but is protected by an outer shell so that it can't be damaged each time the charging process for a print job begins. HP claims the shell reduces wastage that can occur from 'smashed' particles when the charging begins, and also improve speed due to the shorter time it takes to melt.

So far we have detailed a reduction in energy usage and wastage, and improved speed, which are all contributed by the toner particles alone. HP has also redesigned the cartridge housing to allow for more usable toner to reside within. A more efficient use of space is the end result of removing unnecessary bits and pieces from the build of the cartridge, therefore allowing it to hold a little more toner than it otherwise would, without increasing the size of the cartridge.

All of this stuff happens at a level the user can't see, but it's nevertheless an interesting insight HP provided into how scientists have worked behind the scenes to find ways to improve the efficiency of the printing process. In the end, the end user just wants to know how the printer performs, how easy it is to set up and use, and its overall running costs, and this technology is a factor in all of those facets.

Setting up the printer is easy for the most part. The toner cartridges drop into a tray at the front with no hassle at all and with reduced rubbish (they lack pull tabs), and the printer driver can be installed on computers without a CD drive by visiting the Web address printed on the setup guide. You can choose to connect the printer directly to a computer via USB, or place it on a network via an Ethernet cable or Wi-Fi. We undertook the Ethernet and Wi-Fi methods for our tests on different computers and mobile devices, and they worked flawlessly.

Paper slots into a 150-sheet tray at the base of the printer, and a curved paper path sees it eventually emerge in a 100-sheet output tray below the scanning bed. There is an inbuilt duplex unit that allows for paper to be printed on both sides, and the first time we loaded the printer and used this option, we were greeted by continual paper jams. It turns out the paper we used was slightly bent in the middle from sitting awkwardly on a shelf for a long time. A fresh ream of plain A4 laser paper from the IT department's stash remedied this issue, but not completely. We still experienced some intermittent paper jams on duplex operations after that.

We used Google Docs for a lot of our printing, considering this is where we keep most of our documents these days. A 47-page Word document with full pages of text containing colours and highlights was printed in 3min 57sec, with a rounded out average of just under 12 pages per minute. The whole story is that it took 1min 12sec for the job to spool over the network via the PCL 6 driver, and 1min 25sec until the first page arrived. From then on it was all speed, with the printer knocking out 19 pages in the second minute of the job's duration.

The same document was also printed from the printer's USB port directly, using a USB stick. In this job, the overall performance was greater since the job started printing a lot sooner, with a first-page-out time of 30sec. The total average for the job was boosted to just over 15 pages per minute because of that. An 84-page PDF with full pages of black text averaged 14 pages per minute when printed from Google Docs, inclusive of spool time. In duplex mode, the speed dropped by about 50 per cent.

It's worth noting that the printer's wake-up time was also very quick. It was up and running within a couple of seconds of us sending the print job, even when we hadn't used the printer for hours beforehand. Noise emissions were acceptable, and we think it's a printer that can happily exist in the same room as its users without its mechanical noises driving them crazy. Power consumption when the printer was asleep was 3W, and 11W when on but idle. The start of a print job consumed over 700W, and bounced between 300-500W thereafter.

Print quality was of a high grade in our test documents, with black and coloured text looking crisp and clear, and with highlights butting up right against black text so that you couldn't see any borders or gaps. Small sized text, such as that used in fine print, was also printed with clarity.

In short, the output was easy on the eyes and professional in appearance. It's a capable printer for documents that also involve graphics and photographs, but it won't be crystal clear in its output of jobs that include large or full-page photographs; its output was dark and the resolution wasn't high enough for such tasks.

Cloud and other features

Further to being able to print over a network and through a USB stick, the printer has support for Cloud printing options such as Google Cloud Print, and through HP's own ePrint service. Once you associate the printer with your Google account, you can print to it from any computer or device on which you use Google's services, without having to be on the same physical network as the printer.

However, in order to associate the printer with your Google account, you must first register the printer with HP's ePrint service so that the printer has its own email address. It's that email address that is used by Google Cloud Print to recognise the printer. Note that if you print from remote locations and the printer jams, you might not know about it -- one of our jobs jammed while printing from a phone over the Internet, and we were none the wiser until we entered the office.

AirPrint is supported from Apple devices, and when on the same wireless network as the printer, the printer will be found automatically.

Wi-Fi Direct is supported, meaning that a direct connection can be made to the printer from a mobile device.

Scanning can be undertaken from a computer connected to the printer once the HP driver is installed, and scans can also be invoked from the touchscreen panel on the printer itself. It's a scanner that is primarily useful for scanning flat sheets of paper, since the scanner's lid doesn't lift to facilitate the scanning of books or magazines. A document feeder allows for multi-page jobs to be scanned or copied easily.

You also get faxing capabilities, and, as is the case with many a modern printer, there are apps, too. You can print content from a wide range of sources, but we were particularly enthused when we saw an Angry Birds app. It turns out you can print Angry Birds characters for dot-to-dot and colouring projects for the kids -- a home office printer that will give you good old means to occupy the kids while you get some work done.

We like the touchscreen interface on this printer is one of the best we've seen to date. It has good responsiveness, large icons, and the menu is laid out in a clear fashion so that things make sense. Printing from USB devices was particularly easy. The screen resides on a hinge that allows for some tilting that can make it easier to view depending on the height of the table the printer is sitting on. The only drawback of the screen's location is that it sits above the USB port for printing off USB sticks. It makes the USB port awkward to access.

The LaserJet Pro MFP M277dw is primarily aimed a home offices or small offices that have workgroups of up to five users with a recommended volume of up to 2500 pages per month. Toner cartridge costs are as follows (supplied by HP at the time of writing):

Total running costs for standard toner (the A models) is based on a stated page yield of 1500 pages for black and 1400 pages for each colour, resulting in a per page cost of 7.3 cents for monochrome jobs, and 35.2 cents for colour. You'll get slightly better value for your money when you use the high-yield toner (the X models), which have a stated page yield of 2800 for black, and 2300 for each colour. Cost per page for monochrome is 5.3 cents, and for colour it's 33.7 cents.

These toner cartridges have what HP calls JetIntelligence, which incorporates security that can detect removal, theft, and genuine cartridges. HP's tools also provide a print gauge that can tell you how much toner is left, and predict usage based on your regular print jobs.

• Top 10 things to consider when buying a new laser printer