A sublime HP netbook that's great to use, looks stylish and runs quickly The HP Mini 5101 feels more like a regular laptop than a netbook and this is because of its sturdy construction, relatively good speed and excellent keyboard design. Not only that, it looks good and it has a 1366x768 screen. There really isn't too much wrong with this netbook at all, and we think it's probably the best netbook currently available on the market.

When is a netbook so good that it feels like you’re using a regular laptop? Pretty much never, but the HP Mini 5101 feels as close to a real notebook as you'll get with a netbook, and we think it's a brilliant product. It's built out of metal and is very stylish, with a beautiful keyboard and a latchless, high resolution 10.1in screen. Its specifications mean that unless you’ve got a multitude of programs open at the same time, it doesn’t feel like it’s running an Intel Atom CPU.

While using it, you get the sense that the HP Mini 5101 is just a regular laptop, rather than a 10.1in netbook. It has a higher-than-usual screen resolution (1366x768), a very solid keyboard that doesn't bounce when you hit keys and a relatively large touchpad with conventionally placed buttons (unlike the HP Mini 1001TU). It has an isolated keyboard design, with each key being 14mm wide and 4mm away from adjacent keys. There are actually many similarities between this netbook and HP's Probook 4510 — mainly the keyboard, the latchless screen design, and the very solid construction. The chassis is made from magnesium alloy, while the screen's lid is made from anodised aluminium. You can bend the lid with a good amount of force and your fingers won't produce any puddling on the LCD screen.

The HP Mini 5101 comes with 2GB of DDR2 SDRAM, which gives it better performance than most netbooks on the market. You can switch between programs and navigate Windows folders and settings without noticing much of a delay, and program load times aren't exorbitant. Like all netbooks, you can't use the Mini 5101 for high-end tasks such as media encoding: it took 7min 48sec to encode 53min worth of WAV files to MP3s and it finished our 3D rendering project in 6min 57sec in Blender 3D.

The large amount of RAM isn't the only impressive spec on this netbook. It ships with an Intel Atom N280 CPU, which has a 667MHz front-side bus speed instead of a 533MHz bus, 802.11n wireless networking (using a Broadcom 43224AG chip), Gigabit Ethernet (using a Marvell Yukon 88E8072 PCI-E chip), and a 320GB, 7200rpm SATA hard drive (a Fujitsu MHZ2320BJ G2 model). This hard drive recorded an average transfer speed of 28.65 megabytes per second in our tests, which is approximately 10MBps faster than most netbooks. Its capacity, too, is greater than many regular laptops, let alone netbooks.

After using the Mini 5101 for a few hours, its base will get slightly warm. This will be noticeable when you use it on your lap, and will be uncomfortable on hot days. There are vent holes on the base, and a vent with an extraction fan on the left side of the chassis. It's not an overly loud netbook, even though the fan does pump out a decent amount of air and the hard drive is not a silent solid-state model. The 7200rpm hard drive produces some noticeable vibration, but it's not enough to be annoying. HP has installed 3D DriveGuard technology, but it does not inform you if a shock or excessive movement has caused the drive to park its heads. You also can't adjust its sensitivity. 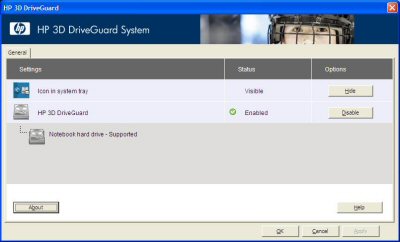 HP DriveGuard works in the background, but does not inform you if the hard drive has experienced shock and parked its heads. Its sensitivity can't be adjusted.

Because of its relatively high-end components, the HP Mini 5101's 4-cell battery won't give you more than a couple of hours of life away from an outlet unless you employ a sensible power management plan (there is an option for a 6-cell battery). It lasted just 1hr 55min in our video rundown test, in which we switch off power management, switch on the wireless radio and turn the screen brightness all the way up while looping Xvid-encoded videos.

Video playback was smooth as silk and the screen displayed colours vibrantly and with good brightness. It's not a glossy screen, which means it won't be prone to reflections. You can use the screen outdoors as long as you stay in shaded areas; bright sunlight will make it very hard to read. The high resolution of the screen as well as a relatively good pair of speakers in the chassis make this netbook ideal for viewing videos. The large hard drive will let you carry a rather substantial video library with you when you travel.

There are a couple of quirks with this netbook, however. The lettering on the keys is printed in a subdued colour that can be hard to read in dim lighting. This won't be a problem if you're a touch typist, as the layout of the board is standard. Oddly enough, the function keys are not standard. In order to use the function keys, you actually have to press the Fn button. The function keys are primarily used to change the volume or screen brightness, put the laptop into standby mode or lock it, and switch to video out mode. On other laptops these functions are secondary and require the Fn button to be pressed. We wouldn't mind this so much if trying to refresh a Web page didn't put the laptop into standby mode instead! Above the keyboard reside two shortcut buttons for launching your default Web browser and e-mail programs, while the front of the netbook has a wireless radio toggle switch. 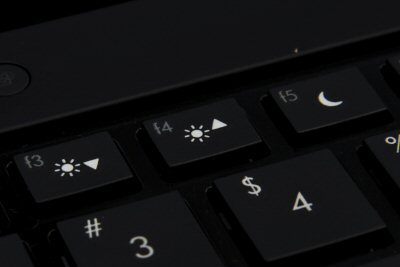 The primary task of the function keys is to change the brightness, volume and video output, and to lock or put the netbook into standby mode. 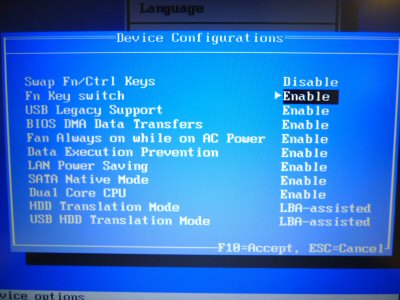 UPDATE: Thanks to our friends on Twitter for reminding us to check the BIOS! The function keys on the Mini 5101 can be switched back to normal by enabling the 'Fn Key switch' option in the System Configuration-Device Configurations menu.

One thing you can't do is disable the touchpad, but the palm rest and keyboard are so well designed, you'll never end up hitting it inadvertently. The netbook's base is 26.2cm wide 18.2cm deep, which is the same as most of the other 10.1in netbooks on the market, so it's amazing that HP has been able to make this notebook so much more comfortable to use. We think it has everything to do with the fact the keys and the palm rest are at the same exact level, and that the keys are so solid to the touch and well spaced. The netbook weighs only 1.1kg.

Like most netbooks on the market, the HP Mini 5101 gives you a webcam, three USB 2.0 ports, Bluetooth 2.1, a D-Sub port, an SD slot, and Ethernet, microphone and headphone jacks. HP supplies a trial version of Microsoft Office 2007, but it also includes Corel's Home Office suite. You also get McAfee antivirus and firewall software.

Despite the Bizzaro World function keys (which can be switched in the BIOS), the Mini 5101 is an absolute pleasure to use, and it doesn't really feel like a netbook unless you overload the CPU with work. Indeed, much like the everlasting love we have for HP's Touchsmart PC IQ545A, the Mini 5101 will stay in our hearts long after we give it back to HP.