HP Mini 5103 (XP882PA) review: One of the best netbooks on the Australian market 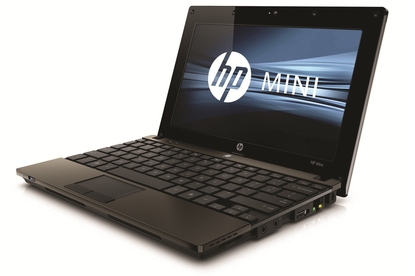 Despite not being very different to the HP Mini 5102, the HP Mini 5103 is still one of the best netbooks money can buy... if you don't mind forking over so much cash for a netbook, that is. It's solidly constructed, has 2GB of RAM and a fast 7200rpm hard drive, and its battery life is great. We hate the prolonged setup procedure when you boot it up for the first time, and think it comes with too much bloatware, but overall, the 5103 is excellent.

The 10.1in HP Mini 5103 (XP882PA) netbook doesn't improve much on the brilliant little HP Mini 5102. From its anodised aluminium exterior panels to its internal gizzards, the 5103 is simply an old business netbook with a different model name, but it offers a few new configuration options.

You can opt to buy the Mini 5103 with a zippy dual-core Intel Atom N550 CPU (which we recommend) or you can select a single core Intel Atom N475 or N455. Our review model shipped with an Atom N475 running at 1.83GHz, which is quite fast for a netbook — most older netbook models we've seen ship with a 1.6GHz Atom CPU. The N475 has Hyper-Threading, which gives it the ability to run two software threads simultaneously, and this helps out when multitasking or when running multithreaded applications.

Along with the Atom N475 CPU, the Mini 5103 ships with 2GB of DDR3 SDRAM (the 5102 ran DDR2 SDRAM), integrated Intel 3150 graphics and a 320GB, 7200rpm hard drive. It's a great configuration for a netbook and it performed reasonably well, although not spectacularly, in our tests. In the Blender 3D rendering test, it recorded a time of 6min 21sec, which is 2min 21sec slower than the dual-core based Acer Aspire Happy netbook, but 1min 18sec faster than the HP Mini 5102 that the 5103 replaces. It's not fast for a 1.83GHz Atom–based netbook: the Sony VAIO VPCW21BAGZ recorded 6min 15sec in the same test.

While the HP Mini 5103 would benefit from a dual-core Atom CPU, our tests show that a configuration consisting of the single core Atom N475, 2GB of RAM and a 7200rpm hard drive, can provide decent (albeit still netbook-like) performance. During everyday use, the 5103 felt relatively zippy; applications loaded quickly and we were able to switch between them without much lag. However, browsing to sites with plenty of Flash ads and video that consumed over half of the CPU did bring the netbook to its knees, making it difficult to scroll or even switch to other applications. In that scenario, a dual-core CPU would be beneficial.

One of the best things about the HP Mini 5103 is that it doesn't feel like a netbook, but more like a regular laptop. It's only a 10.1in laptop, but it has a screen resolution that's the same as most 15in notebooks on the market (1366x768) and its keyboard is solid, with well-placed keys that possess good travel. The touchpad is very small (only 63x33mm) and it sometimes feels too sticky, but it does the job it's supposed to do. We like the fact that the chassis doesn't have overly bright LEDs — the power LED and the LEDs on the shortcut buttons are a light blue and not annoyingly bright.

The shortcut buttons can be used to bring up HP's Software Setup utility and the default Web browser. The Software Setup button is not very useful; during the initial set-up process, most of the software on offer is installed anyway. With all that extra software, it took over 30min before we could use the Mini 5103 after we switched it on for the first time. This is the type of set-up process that can kill your enthusiasm for a product. Furthermore, once you're up and running, you have to contend with reminder notices for HP's Support Assistant registration process. The large amount of preinstalled software is a drawback, as it can slow down the netbook if it's throwing reminder notices at you, for example. However, some of the software is useful. In particular, the HP ProtectTools software can be used to manage passwords, as well as encrypt your data and 'shred' deleted files.

Around the edges of the Mini 5103 you'll find three USB 2.0 ports, a VGA port, Gigabit Ethernet, headphone and microphone ports, as well as an SD card slot. A webcam is built in to the screen and you also get 802.11n Wi-Fi and Bluetooth.

The netbook can be used comfortably on your lap as it won't get too warm, but you do have to keep in mind the air vent on the left side. If you block the vent, then the base will warm up noticeably. The netbook is solidly constructed (it's one of the few netbooks on the market to be made of metal) and at 1.45kg, it's a little heavy by netbook standards — for example, the Samsung N150 is 1.25kg and the Sony VAIO VPCW21BAGZ is 1.19kg. One little annoyance that we noticed is that its rubber stops don't provide enough grip on a typical office desk; the 5103 slipped back as we typed on it while it rested on a desk.

The six-cell battery in the Mini 5103 gives the netbook a thick spine and plenty of juice for long trips away from an outlet. In our battery rundown test, in which we disable power management, enable Wi-Fi, maximise the screen brightness and loop an Xvid-encoded video, the netbook lasted exactly five hours. This is 5min shorter than the Acer Aspire Happy, which also uses a 6-cell battery, but it's still a great time, and you can get a lot more out of it if you employ a power management plan and don't run any CPU-intensive tasks.

The HP Mini 5103 is an excellent netbook. It has strong build quality, pretty good performance and long battery life. It would be even better if it came with a dual-core CPU for the price. A solid-state drive would also make it a killer business device! Luckily, these options are available, so you can choose them if you feel they will be useful. It's even available with a touchscreen option, but you don't want to go there — not on a netbook that runs Windows 7 Professional anyway.