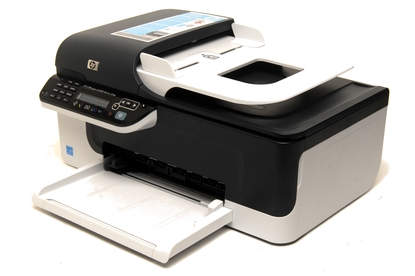 The HP Officejet J4580 All-in-One is a functional and reasonably priced multifunction device, with no special surprises. Faster print speeds would be appreciated, but it should suit most people in need of a low-cost printer.

The HP OfficeJet J4580 has a basic design, with a more business-like look than HP's home-targeted Photosmart range. Unlike many low-end multifunctions, the HP OfficeJet J4580 All-in-One doesn't have a rear paper tray but opts instead for a 100-sheet front paper cassette which cuts down on the printer's overall footprint. The tray is detachable but isn't fully retractable, adding significant depth to the printer when it is attached. The HP Officejet J4580 All-in-One includes an automatic document feeder.

USB 2.0 is the only form of PC connectivity, but the multifunction also has a 33.6Kbps integrated fax.

The control panel on the Officejet J4580 is extremely basic, and can be hard to use at times. Cancelling tasks can often take several seconds, and initiating regular cartridge cleaning and alignment must be done from the control panel itself rather than software on the PC.

Our print speed tests often match those figures quoted by HP but we found some discrepancies when testing the Officejet J4580 All-in-One. HP claims the multifunction can print draft mono documents at up to 28 pages per minute, but in our tests it only managed 16.7ppm. Similarly, HP's quoted mono print speed of 9ppm when using normal quality was faster than the 7.2ppm we averaged. Colour documents averaged 11.3ppm (draft) and 3.2ppm (normal). It took roughly 20-21 seconds for the first page of a draft document to print.

HP's claimed 4x6in photo print speed of 51sec was closer to what we experienced; photos took about a minute to print. A4 photos are quite a bit slower, taking an average of 3min to print. These aren't the slowest print speeds around — and the HP Officejet J4580 All-in-One manages to keep pace with the more expensive Brother MFC-490CW — but the speeds aren't amazing.

Text in mono documents is of a decent standard and characters are easily readable if a little bolder than those more expensive printers produce. There is a loss of clarity in text when using a 7pt font, but the multifunction retains decent quality when the text is enlarged to 20pt. Colour accuracy was generally good in our document tests, though red is over-saturated.

In photo prints, however, the colour palette as a whole is somewhat unsaturated. Colours lack the vividness often produced by inkjet printers, though the surprising lack of banding issues makes the Officejet J4580 a much better photo printer than we expected. Still, it is best to use this multifunction for printing colour office documents rather than trusting it with your treasured family photos.

The HP Officejet J4580 All-in-One provides scan presets that are accessible from the control panel as well as through software. Its scan speed is adequate fast, and the results are acceptable. When scanning at 600dpi images are perhaps overly light compared to the source, but detail isn't lost.