A very well built PC with good features, but plenty of unnecessary bloatware If you love the look of a new iMac, but don't want to change away from Windows, HP's Omni27 is a near-perfect solution. It's big, pretty and powerful with few flaws.

The HP Omni27 is well equipped in the CPU, RAM and hard drive departments, sporting a 2.8GHz Intel Core i7-2600S, 8GB of DDR3 RAM and a 2TB 7200RPM SATA drive, but stumbles in graphics with a middling AMD Radeon HD 6550A with 2GB of memory.

Putting this into perspective, a 27in Apple iMac ‘specced up with a 3.4GHz Core i7, 8GB of DDR3, a 2TB hard drive and a (superior) Radeon HD 6970M 1GB graphics card, costs $2549 — $50 more than the Omni27 configuration we tested for a machine we think is marginally better. HP starts the Omni27 at $1999 for a Core i5 model, where Apple’s basic iMac is $1699 (for an inferior processor); the two models are largely competitive on price but considering Apple is seen as a premium brand we would have expected the Omni27 to be a couple of hundred dollars cheaper than it is, and a better graphics card would have been a good selling point. 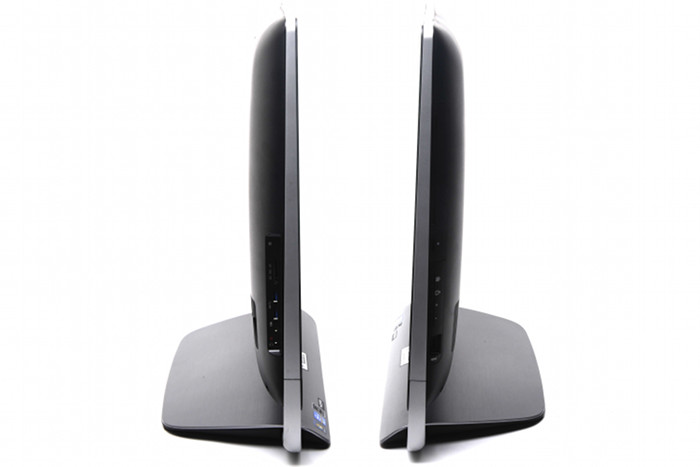 The HP Omni27 is no slouch when it comes to multimedia performance, blazing through an eight-thread Blender render in 18 seconds. We don’t have any performance figures from the iMac to compare, but we’d expect the Core i7 model to be similar around the 20 second mark and the Core i5 models to be in the region of 35 seconds and above — so the Omni27’s performance here is good. Our standard iTunes encoding test, converting 54min of WAV files to MP3, was over in 35sec — an impressive result.

Graphics performance is uninspiring. The Omni27 will make a more than capable machine for basic home use, for Blu-ray movie watching or for basic 3D games, but any blockbuster titles from the last year will probably have to use low settings or a reduced resolution to remain playable. Our 3DMark06 results for the HP Omni 27 of 7746 3DMarks show that performance is reasonable but not outstanding.

A Windows Experience Index score of 5.9 (out of a possible 7.9, with the lowest score 1.0) overall sums up the HP Omni27’s performance aptly: pretty good for a general consumer desktop PC, but not anything ground-breakingly fast. If you’re an average user who doesn’t play too many modern video games (or if you’ve got a console for that, which the Omni27 would love to have plugged in), this all-in-one should handle your needs with ease.

The HP Omni27 is weakest in the graphics performance department, but gives generally good results in all other areas. It’s got a great screen, is well built, has the convenience of good speakers and a HDMI input, and is comparably (if not competitively) priced against its main Apple rival.