HP's entry-level all-in-one offering is not very powerful and doesn't offer many extra features. If you can work your way through the pre-installed bloatware, this desktop PC will suffice for Web browsing and watching videos.

The HP Pavilion All-In-One MS212a desktop PC has a minimalist, glossy black design that should suit modern-looking living rooms. It has an 18.5in BrightView LCD screen. This is a tad small for an all-in-one PC — the Apple iMac starts at 21.5in, for example — but it will still be able to display 720p content. The display is highly reflective, which can be annoying in well-lit environments.

This all-in-one PC provides six USB 2.0 ports in total, with four on the back panel and two at the side. There's also a multi-card reader supporting MemoryStick, SD, MMC, CF and xD cards, as well as a 10/100 Ethernet port and headphone/microphone jacks. Integrated 802.11b/g Wi-Fi is sufficient for small homes, but the lack of the faster and farther-reaching 802.11n standard means the desktop PC can't be situated too far from a wireless router.

The HP Pavilion MS212a provides stereo sound through speakers underneath the display. The sound quality isn't particularly impressive and the speakers won't fill a large room even at maximum volume. Adjusting the volume using the media keys on the keyboard annoyingly exits any full-screen video playback.

Given that many current and upcoming all-in-one PCs feature touch screens, we almost expected the Pavilion MS212a to have the same ability. However, its low retail price means a keyboard and mouse are the only input methods. These are wired rather than wireless, detracting from the PC's overall look. It doesn't have Bluetooth either, so any wireless keyboards or mice you buy will require their own wireless dongle.

Like most all-in-one PCs, the HP Pavilion MS212a uses notebook components, so it is a little underpowered compared to regular desktop PCs. HP offers a single hardware configuration; the Pavilion MS212a is equipped with a 1.5GHz, dual-core AMD Athlon X2 3250e processor as well as 2GB of DDR2 memory, ATI Radeon HD 3200 integrated graphics and a 7200rpm, 320GB hard drive. HP reserves 12GB of the hard drive for a second partition for system recovery — so you're effectively left with 286GB of usable space.

The Pavilion All-In-One MS212a isn't a high-powered machine. Our benchmarks show it is quite slow when multitasking and performing heavy duty tasks, though the AMD processor is capable of rendering 3D images and encoding media at a decent pace. The integrated graphics are the weakest component, with Futuremark's 3DMark06 benchmark failing to test properly. 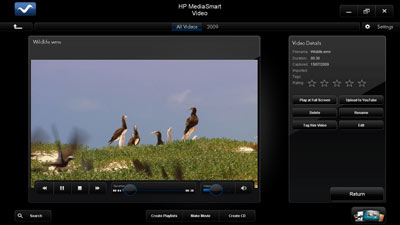 HP is known for rather intrusive software and, unfortunately, the Pavilion MS212a doesn't buck this trend. Instead of going through the standard Windows set-up process, you are faced with HP's own version which guides you through registration and connecting to the Internet or a local network. While handy, it's painfully slow. Once set up, you'll find Windows 7 Home Premium bloated with a 60-day Norton Internet Security trial as well as HP help software and Cyberlink DVD burning and editing software. HP's MediaSmart Software Suite is useful for watching and editing media, though the HP Advisor, a Mac OS X-like dock, is redundant when you can just use Windows 7's revamped taskbar.

Considering you can spend an extra $100 and get Medion's akoya P4010 all-in-one with better performance and a touch screen, the Pavilion All-In-One MS212a seems a bit of a raw deal. However, if you only need to browse the Web or watch videos, it will suffice.