A reasonably lightweight, long-lasting and speedy 13in laptop The HP Pavilion dm3-101tu (VV707PA) is an inexpensive notebook, yet it packs plenty of CPU speed and battery life, and has good connectivity options. We think it would suit students looking for something light, long-lasting and comfortable to type on, but even business users might want to look into it. We just wish HP wouldn't pre-load so much software.

HP's Pavilion dm3-101tu (VV707PA) is a 13.3in notebook with good speed, long battery life, a strong yet lean body, and an affordable price tag. It's this combination that should make it a sought after device for students and office users alike — and even for travellers. However, it's not a perfect laptop, and we do have a couple of quibbles with its design and with the number of setup screens and annoying reminders that you have to endure from preinstalled software.

Before you can use the Pavilion dm3-101tu (VV707PA), you have to go through a few registration screens for HP's Total Care Program and you are asked if you want to set up Norton Internet Suite. Of course, you can say no to all these things, but once Windows 7 has loaded you are pestered by reminders and intrusive pop-up boxes. There is so much extra software installed on the HP Pavilion dm3, if you want to restore it back to its factory condition (using the installed Recovery Manager software) it will take well over an hour!

Some of this software is useful, such as CyberLink's DVD burning software, but most of it you can do without; for example, a trial version of Microsoft Office is installed, as is Norton Internet Security. HP's MediaSmart software is also installed. By default, your media files are played through MediaSmart, which is a slow and cumbersome interface. For example, viewing photos from an SD card isn’t as intuitive as it is with Windows 7’s built-in Photo Viewer: when you view a photo, you can’t navigate through the rest of the folder. You either have to add the files to MediaSmart first, or resort to opening them one by one.

Furthermore, MediaSmart really isn't that smart, as not all of your media will be available in the one place; you'll still have to open up new windows to view videos and photos, and listen to music. This is made even more difficult because the default setting for MediaSmart is to start in full-screen mode. It's the type of interface that is fine for a TouchSmart PC (the layout is conducive to touch), but it really isn't much good on a notebook.

The HP Pavilion dm3-101tu has a strong hardware configuration. You get a low-voltage Intel Core 2 Duo SU7300 CPU, which runs at 1.3GHz, as well as 4GB of DDR3 RAM, a 320GB hard drive and integrated Intel GMA 4500MHD graphics. The speed of the CPU is enough to let you run most office applications as well as photo editing software, and the notebook can even be used for more taxing tasks such as video editing. In the Blender 3D and iTunes MP3 encoding tests, the laptop recorded times of 2min 18sec and 2min 09sec — faster than the Lenovo ThinkPad Edge 13", for example, which uses a 1.5GHz AMD Athlon X2 Neo L325 CPU.

The low-voltage CPU and the inclusion of a six-cell, 57 Watt-hour battery mean that the dm3-101tu can have a long life away from an outlet. In our battery rundown test — in which we disable power management, maximise the brightness and enable the wireless radio — the notebook looped an Xvid-encoded video for 4hr 9min. This is over an hour longer than the Lenovo and over two hours longer than Dell's Vostro 13. You can get a lot more battery life out of it if you enable a power management scheme, but it will depend on the type of work you do. Viewing Web pages with lots of CPU-intensive Flash elements will drain the battery quicker, for example.

The dm3-101tu (VV707PA) weighs around 2kg, which is relatively light considering the chassis is made from metal. It has brushed aluminium panels on the palm rest and lid that look and feel good. The screen and bezel are glossy, so reflections might pose a problem when you use the notebook outdoors or near a window. However, the brightness and contrast of the screen are good. The only problem with the screen is that it has a narrow vertical viewing angle, which means that you might have to adjust it regularly while watching videos. Luckily there is an HDMI port, so you can easily connect the dm3-101tu to your TV.

For the most part, the dm3 is very well built. It feels very solid when you pick it up and move it around and the hinges are stiff and keep the screen perfectly in place. However, it’s the little details that don’t feel good to the touch; the touchpad’s buttons feel like they have two steps (similar to a digital camera’s shutter button), which can make you think you’ve clicked when you haven’t. The power button resides on the side and you have to slide it to switch on the machine, but it’s very shallow and hard to get a grip. The touchpad has a mirror finish that can sometimes feel sticky and unresponsive, despite being so smooth. It shows fingerprints and smudges very clearly and will require cleaning from time to time.

The keyboard has island-style keys and they are soft and tactile. The only buttons that are a little uncomfortable are the arrow keys — the up and down arrows are too small. There aren't dedicated page up and down buttons, which is annoying. Rather than having media shortcut buttons above or to the side of the keyboard, the play/pause, skip and stop buttons are located on the function keys, and they are the primary, rather than secondary function. That is: you don't have to press the Fn button in order to use them. Likewise, you can change the screen brightness and volume without holding down the Fn key. We like this feature and think it makes a lot of sense for users who barely use the F-keys while browsing the Web or working on documents. 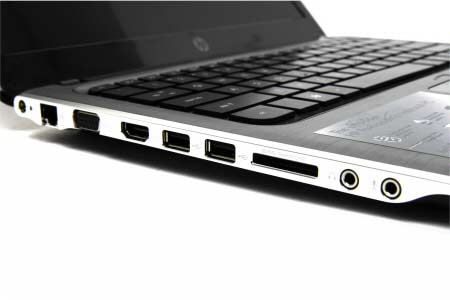 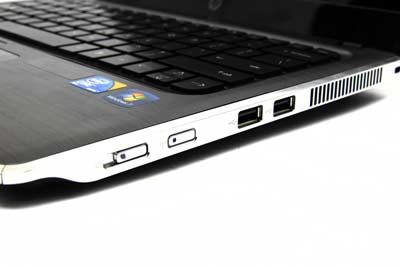 After a while, the dm3's base gets warm and becomes uncomfortable to rest on your lap, especially on hot, sticky days. You're better off resting it on a flat surface where the bottom vents can breathe.

We like the fact that you can easily remove panels to access the RAM and hard drive slots. Along the sides of the notebook you will find four USB 2.0 ports, an SD card reader, headphone and microphone ports, an HDMI port and a Gigabit Ethernet port. You also get a webcam and 802.11n wireless networking. This is all fairly standard connectivity for a 13in notebook that costs just over $1000, except for the number of USB 2.0 ports; most laptops have three ports, yet HP generously gives you a fourth.

Despite the glut of preinstalled software, the somewhat sticky touchpad and the poorly placed power button, the HP Pavilion dm3-101tu (VV707PA) is a fantastic little unit with good speed, a long battery life, and, above all, a competitive price.