Nice styling, above-average audio reproduction, a decent configuration and good user comfort make the Pavilion dm4-3000 beats Edition is a worthy choice for everyday use. It's a well-rounded 2kg machine that's not overly expensive and we enjoyed using it. However, it could use a less glossy screen and some improvements to some of its components (such as the DVD burner).

For $999, the HP Pavilion dm4-3000 Beats Edition notebook is a good buy. It has a nice style, it's comfortable to use and it houses a solid configuration that's helmed by an Intel Core i5-2430M CPU. At 14in and 2kg, it's not an overly big or heavy notebook and it sits in a nice middle ground between slightly more expensive Ultrabooks and cheaper, yet bulkier 15in notebooks.

The first thing you notice about this Beats Edition notebook is its blood-red keyboard, especially when it's illuminated. When the backlight is on, the keys glow a bright red that provides a computing experience that just feels more exciting compared to typing on a laptop with a conventional white backlight. You have to switch on the keyboard's backlight manually and the bad thing is that there is no automatic timer or sensor to switch it off. You also can't select different levels of illumination. The keyboard itself has a standard layout, although it does suffer from half-height Up and Down arrow keys, and Page and Home keys that are directly to the right of the Enter and Backspace keys.

It's a comfortable keyboard to use though — the keys feel soft and possess decent travel. We didn't notice much "bouncing" when hitting the keys, even on the side where the optical drive resides, and there was no unsettling ratting. The function keys, like those on most recent HP laptops, have their primary functions set to perform tasks such as changing the screen brightness and volume, enabling/disabling the Wi-Fi module, enabling/disabling the keyboard backlight and controlling media players (play/pause, skip).

Below the keyboard is a multi-touch Synaptics touchpad that feels smooth and which was responsive during our test period. However, because it's a relatively small laptop with a narrow palm rest area, its touchpad can feel cramped — it's 87mm wide, but only 43mm high and with separate left- and right-click buttons. This is unlike a "ClickPad", such as the one used in the HP Envy 15, for example, in which these buttons are under the pad itself and there is more space to move the cursor and perform gestures.

The palm rest feels soft and has a matte texture, unlike the bezel around the screen, which is polished plastic. The 14in screen itself has a native resolution of 1366x768. It's a glossy screen, which means reflections can be a big problem. Additionally, it has narrow vertical viewing angles, which means that, even if it's directly in front of you, you might still have to adjust the screen frequently in order to see correct contrast and colour details. 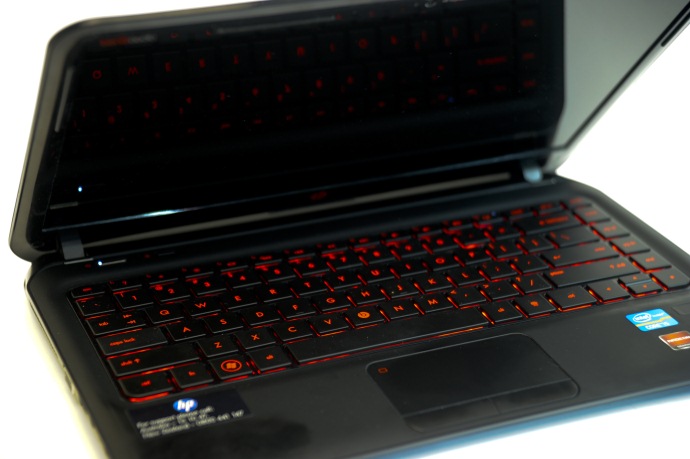 With its red backlight, the illuminated keyboard is one of the stand-out features of this notebook.

The Pavilion dm4-3000 Beats Edition has a metal chassis and metal panels, and it's reasonably well built. However, we noticed that the hard drive's access panel on our test unit didn't sit firmly in place and moved in and out whenever we picked up the notebook. The DVD burner on the right side of our test notebook was troublesome. It would not always eject on the first go. In fact, it often required multiple presses before the tray could be accessed. Because of this, a better solution for this laptop would be a keyboard-mounted eject button, similar to the one that can be found on the Envy 15 unit.

The DVD burner is part of a well-stocked chassis that also houses three USB ports (two of them being USB 3.0 ports), Gigabit Ethernet, VGA, HDMI and a combination headphone/microphone jack. You also get an SD card reader, a fingerprint reader, a webcam, Bluetooth and 802.11n, single-band Wi-Fi (Intel Centrino Wireless-N 1030).

The dm4-3000 has two speaker slots that shoot audio through the front edge of the laptop and two right near the hinges that fire towards the rear, and they emit adequate quality as far as speakers for 14in laptops are concerned. The Beats Audio processing provides reasonably rich audio, but the end result is not as good as that of the Envy 15, for example — that is to be expected considering that laptop has six speakers in it rather than four and much better frequency response. At high volume levels, the little speakers in the dm4-3000 tend to distort. Still, for a 14in laptop with small speakers, the audio quality is not too bad at all and we're happy with it.

For everyday tasks, be it Web browsing, working on office documents or watching videos and listening to music, the dm4-3000 is perfect. Thanks to its Intel Core i5-2430M CPU though, which is surrounded by 8GB of DDR3 SDRAM, an AMD Radeon HD 7470M graphics adapter and a 5400rpm, 500GB hard drive (model ST9500325AS), it can do a whole lot more. It recorded a time of 43sec in our Blender 3D rendering task, 52sec in our iTunes MP3 encoding task and 49min in our AutoGordianKnot DVD-to-Xvid transcoding task. Compared to other laptops that use the same CPU, such as the Fujitsu LifeBook TH701 and the Samsung Chronos, these are all solid results. They show that the Pavilion dm4-3000 has more than adequate processing power and capacity to be used effectively as a tool for working on multimedia files.

Its hard drive, despite not having a faster 7200rpm spin speed, recorded a respectable 80.2 megabytes per second (MBps) read time and a 78.55MBps write time in CrystalDiskMark. It was also satisfyingly fast in our own file transfer tests, recording 56.53MBps when duplicating 2.1GB worth of files on the disk.

Its graphics performance is good enough to allow many older games to be run, as long as they are not too graphics intensive, but it's not a laptop that should be considered for gaming, especially if you want to run titles such as Battlefield 3. In 3DMark06, a score of 5604 was reached, while in 3DMark11, the laptop only reached a mark of P692. 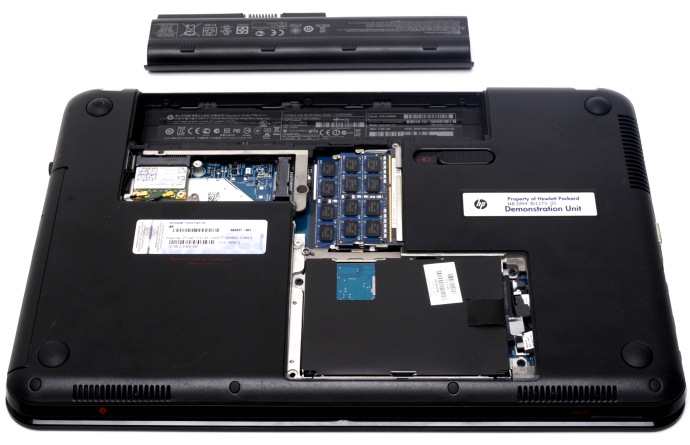 After removing the battery, the bottom panels can be unscrewed so that you can access the RAM and Wi-Fi modules, as well as the hard drive. There is a free PCI Express Mini card slot.

You can use this laptop for a prolonged period of time without it getting too warm. Part of this has to do with the 5400rpm hard drive, which doesn't get as warm as a faster, 7200rpm model would. There is a vent on the left side of the chassis, through which the internal fan extracts the warm air created by the internal components. It didn't get noticeably loud during our tests, even when the notebook's processor was hard at work.

The dm4-3000 has a 55 Watt-hour battery that sits in its spine. In our rundown test, in which we disable power management, enable Wi-Fi, maximise screen brightness and loop an Xvid-encoded video, it lasted 3hr 31min. This is a good time for a notebook of this size and with this amount of power under the hood. You will be able to get more out of it if you only use the notebook for light Web browsing and document creation, and employ a sensible power management strategy. For comparison, the Fujitsu LifeBook TH701, which has the same CPU but a slightly smaller screen, lasted 16min less in this test; the HP Folio 13, which is an Ultrabook with a low voltage CPU, lasted over 2hr longer.

The dm4-3000 has switchable graphics, which means the integrated Intel HD 3000 adapter is used when it's running on battery power, and when processing most applications, while the AMD Radeon adapter is used when the laptop is plugged in and required to process 3D graphics (that is, run games).

Overall, we think the Pavilion dm4-3000 Beats Edition laptop is a good choice for anyone who wants something stylish with a good configuration and a decent set of features. It's not overly heavy and its battery life is also respectable. Some aspects of its build could be better, such as the DVD burner (which had trouble opening) and the hard drive access panel (which was too loose), but we found it to be a comfortable unit and enjoyed using it, especially at night.