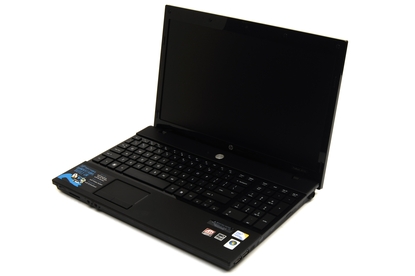 We like the looks, performance and user-friendliness of the HP ProBook 4510s Notebook PC (VA033PA), as well as its competitive price. We think it's a great choice for any business user (particularly an accountant) who wants something that isn't a typical, drab-looking business notebook.

The HP ProBook 4510s Notebook PC (VA033PA) is a 15.6in laptop designed for business users, but it looks nothing like a business notebook. It has plenty of gloss, clean lines and a 16:9 widescreen display. There is actually nothing that screams "business notebook" when you glance at it except for the dedicated number pad, which is sure to make accountants squeal with excitement (as will its attractive price).

The design of the HP ProBook 4510s Notebook PC (VA033PA) is very appealing. It has a latch-less screen that can be opened with one hand (though only just) when the laptop is sitting flat on a desk, and it has a keyboard with isolated keys that sit at the same level as the palm rest. They look great, but they take a while to get used to. Each key is 15.5mm wide and there is a 3mm gap between them. Some keys have an odd shape, such as the bottom row of keys (which are deeper than they are wide), and the arrow keys are very small (only 13mm wide and 10mm deep).

The overall user-friendliness of the HP ProBook 4510s is good, but it could be better. We like the fact that the touchpad keys don't make a sound when you press them, but hate that the buttons are hinged at the top and can only be pressed from the bottom. Apart from this little annoyance, using the notebook is a joy: the palm rest is large, the number pad is useful for making quick calculations, and the screen isn't susceptible to reflections.

On the inside, the HP ProBook 4510s features an Intel Core 2 Duo T6570 CPU, which runs at 2.1GHz. It also has 2GB of DDR2 SDRAM, an ATI Mobility Radeon HD 4330 graphics adapter and a 320GB hard drive (a Fujitsu MHZ2320BH G2). In the WorldBench 6 benchmark suite it recorded a score of 84, which is approximately eight per cent faster than the other T6570-based laptop we have seen (the Dell Vostro 1220). The reason for the better performance is the dedicated graphics processor in the ProBook as opposed to the integrated graphics in the Vostro. In the Blender 3D test, which purely tests CPU performance, the ProBook recorded a time of 1min 25sec, which is identical to the Vostro. In the iTunes Mp3 encoding test, the ProBook recorded a time of 1min 19sec, which is slightly quicker than expected.

The notebook was slower than expected in our hard drive transfer test, where it recorded a rate of 18 megabytes per second. This is 2MBps slower than a typical 5400rpm hard drive, and much slower than the Dell Vostro 1220's drive (24MBps). You won't want to use this laptop for disk-intensive jobs. It doesn't have an eSATA port, so you can't plug in a fast external hard drive.

The Intel Core 2 Duo T6750 CPU in the 15.6in ProBook is capable of working in smaller laptops — such as the 12.1in Dell Vostro 1220 — without making the laptop too warm to touch. As a result, even after hours of processing the relatively large HP ProBook chassis does not get noticeably warm. There aren't any vents on the bottom of the unit, so you can use it on your lap without blocking off its airflow; there is a vent on the left side with a fan, and this is audible even when the notebook is idle.

Along the edges of the ProBook 4510s notebook you get four USB 2.0 ports, an optical drive, an SD card slot, microphone and headphone ports, D-Sub and Gigabit Ethernet ports, as well as an ExpressCard/34 slot. On a laptop as big as this the lack of a full-sized ExpressCard/54 slot is a drawback and slightly limits its expansion options. We like the fact that a HDMI port is included so that you can connect to a big-screen TV or monitor, but we wish the laptop also had an eSATA port.

For wireless networking you get an Intel WiFi Link 5100 adapter that has two antennas and is capable of logging on to 802.11a/g/n networks, and Bluetooth is also built in. We didn't have any problems using the notebook on any of our wireless networks. You'll be able to use the ProBook 4510s for a relatively long time while away from a power outlet, as it ships with a 63 Watt-hour, 8-cell battery. It lasted 2hr and 51min in our video rundown test, in which we loop a video while the screen brightness is full and the wireless radio is enabled. This is a good result for a notebook with a 15in screen, but it's no match for the Dell Vostro 1520, which has a 9-cell battery.

The screen has a 16:9 aspect ratio, which is odd for a business notebook but is great if you want to watch recorded digital TV programs. It has a native resolution of 1366x768 and possesses good contrast. The lid is strong and this is true of the laptop as a whole. It feels very sturdy, even when you hold it with one hand from either edge. And despite being such a big notebook, it only weighs 2.5kg!

Overall, we like the looks, performance and user-friendliness of the ProBook 4510s, although it isn't perfect. The keyboard does take some getting used to, its hard drive could be faster, and its touchpad buttons can be annoying to use. But for $1489 it doesn't need to be perfect. We think this laptop is a great choice for any business user (particularly an accountant) who wants something that isn't a typical drab business notebook.