A business-oriented HP TouchSmart touchscreen PC -- but what can you use it for? 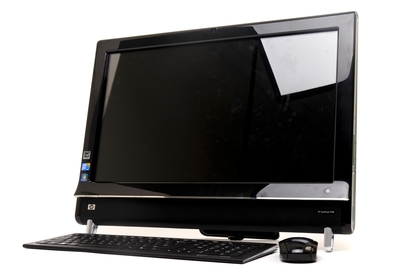 The HP TouchSmart 9100 Business PC is designed for business users, but it's actually a pretty neat solution for a home user. Its TouchSmart software is useful for playing multimedia files and its touchscreen is accurate and easy to use. It's not ideal for a typical office unless software specifically designed for the touchscreen can be used, but it can be a great PC on which to give presentations.

HP touts its TouchSmart 9100 all-in-one touchscreen PC as being suitable for business users, rather than the home market. What we can glean from this is that the HP TouchSmart 9100 Business PC (WM112PA) can be used to give much more interactive and engaging presentations during meetings; instead of clicking to move a slide, you can tap the screen or swipe your finger; you can drag photos across the screen; you can play media files without moving the mouse or using the keyboard. But there is no way you'll want to use the touchscreen to operate the PC for regular work. That's not to say that you can't, it's just that navigating through Windows 7 and applications by pointing at the screen can be a very uncomfortable experience.

Because the TouchSmart 9100 is an all-in-one PC, it will only take up space equivalent to a 23in LCD monitor on your desk, and because it ships with wireless input peripherals, it will also look very neat. It has built-in wireless networking, a slot-loading DVD burner and an adjustable webcam (you can angle it down); the only cable that will run from the PC is the one supplying power from the external adapter. You won't even need to plug in speakers as the built-in ones are loud and can fill up a room — perfect for presentations — but they do distort a little at high volume and they have too much of a directional effect when you sit directly in front of them to listen to music (that is, the music sounds like it comes from one side).

HP's TouchSmart software is designed to be used with a touchscreen and it provides an easy to use way of selecting music, videos and browsing through photos. We had a great time using the TouchSmart 9100 as a media kiosk on our desk from which we could tap the screen to load videos and music off our external hard drive, as well as flick through photos. In fact we think playing media is the strong suit of this PC. However, the software is limited in the way it handles media libraries — for example, we had to copy our music to the PC's hard drive. If your music is in the library, you can search for a particular song simply by writing on the screen rather than by typing. The accuracy of the handwriting recognition is very good — it's fun to use if you have a large music library on the PC. 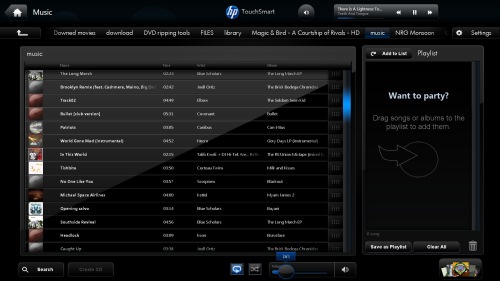 The TouchSmart software that ships with the PC is very media-centric, and it could be a useful addition to a marketing office that creates a lot of videos and jingles, for example. Much like the Lenovo ThinkCentre M90z, we're not sure how else the TouchSmart 9100 can fit into a business environment unless it's used with touch-specific applications.

The screen has a Full HD resolution (1920x1080) and is based on optical touchscreen technology (the same as the Lenovo), which employs cameras at the corners of the bezel to triangulate the position of your finger on the screen. In fact, because it uses cameras, you can use any type of object to point at the screen. Even soft material can make the pointer move. The PC's screen is also multitouch aware.

On the inside, the TouchSmart 9100 has a 2009 configuration that's similar to the HP TouchSmart PC IQ545A. It runs a relatively old Intel Core 2 Duo T6520 CPU, which is a dual-core processor that runs at 2.1GHz. The TouchSmart also has 4GB of RAM, NVIDIA GT230 graphics, and a 7200rpm, 320GB hard drive. Despite using an older generation CPU, it's still reasonably swift and it will also allow you to multitask quite well. In our Blender 3D and iTunes MP3 encoding tests, the 9100 recorded times of 1min 25sec and 1min 23sec, respectively. But we wish it was faster. Even if it were running a notebook-based Core i5-430M CPU at 2.26GHz, for example, it would have completed the same tasks about 25sec sooner. If it were running a 3.2GHz Core i5-650 CPU, like the Lenovo ThinkCentre M90z, then it would have completed the Blender and iTunes tasks in 48sec and 70sec, respectively.

The design of the TouchSmart 9100 is similar to previous models that we've seen, such as the IQ545A, and we're not quite sold on its glossy appearance — we prefer the matte look of the Lenovo. The optical drive is recessed behind the right side of the screen, and it will require you to get up and look at what you're doing when you put in a disc. It's the same criticism we had of the Lenovo, and we'd much rather have the drive sit flush on the edge of the screen so that you don't have to reach too far back for it.

Under a full CPU load during our tests, the TouchSmart 9100 consumed 88 Watts; while it was idle it consumed 70W. When switched off, the power draw was still 1.6W; we'd like to see this get under 1W, and preferably to zero in the future. Visit HP's Web site to read about HP's Environmental Policy. HP has also announced a campaign that offers small businesses cash rebates when they replace and recycle their old PCs before 31 October, 2010.

Despite running relatively old CPU technology, there's no doubt that the HP TouchSmart 9100 is fun to use — especially when listening to music and watching videos — but we can't see it being useful for an office just yet, unless you plan on using touch-enabled office applications.