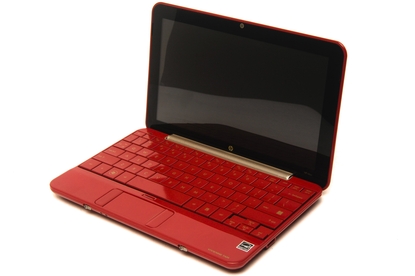 This netbook is all about making a fashion statement. It has a few shortcomings in its feature set, but if you can overlook those you'll be blessed with a good looking and easy-to-use ultraportable computer.

HP's Vivienne Tam Special Edition Notebook PC is an in-your-face netbook that has one main virtue: chicks dig it. They love the colour, the floral design, the carry pouch, the small size of the unit and the big keys. Do guys dig it? Not so much. But hey, look at the pics and judge for yourself.

The exterior is the only thing that differentiates the Vivienne Tam Special Edition Notebook PC from the HP Mini 1001TU, as the cores of both netbooks are identical. You get a 10.2in glossy screen, a 1.6GHz Intel Atom N270 CPU, 1GB of memory and a 60GB hard drive. It runs Windows XP, and runs it relatively swiftly. While browsing the Web and creating office documents, the Vivienne Tam Special Edition was responsive and only slight delays were experienced while switching applications. You can easily listen to music in the background while you do other work without having the netbook slow down to a crawl.

But don't use it for transcoding media files or any type of file compression, because it's not designed to be even remotely quick in these areas. It took 9min 7sec to encode 53min worth of WAV files to 192Kbps MP3s, which is over 1min slower than we expected. Its hard drive, which is the same size as the one found in many iPods, also returned a sluggish result of 16.65 megabytes per second in our file copying tests, which is 4MBps slower than a netbook with a regular notebook hard drive. The hard drive also made annoying click sounds very often, even while the netbook was idle.

The unit's battery performance was identical to the Mini 1001TU's, lasting for 2hr 20min, which isn't a stellar result but is better the Acer Aspire One AOD150 (our current favourite 10.2in netbook). In a typical usage pattern involving Web browsing or document creation while the screen is not at its full brightness level, it should last a little longer.

Disappointingly, the Vivienne Tam Special Edition suffers from the same let-downs as the Mini 1001TU when it comes to the number of features you get for your $899 outlay. There are only two USB 2.0 ports, which is inconvenient if you want to use a 3G Internet key, external mouse and USB thumb drive, for example; there is no D-Sub port for attaching the unit to an external monitor, and there is no separate microphone jack. What you get instead is a proprietary port for HP's external storage solutions, which is a little pointless considering there is already 60GB of space available. Furthermore, you only have 802.11g and 10/100 Ethernet networking speeds, rather than 802.11n and Gigabit Ethernet.

These quibbles aside, it's the artwork that really sets this netbook apart, and if you're a fan of its design you will probably be able to forgive the shortcomings in its configuration. We handed the Vivienne Tam Special Edition to PC World Editorial Director Amanda Conroy to get a female perspective on the design and overall feel of the netbook. She reported:

The Vivienne Tam designed netbook certainly turns heads with its striking red design, featuring gold accents such as key lettering, and a Chinese character on the Enter key, as well as a stylish cherry blossom-inspired decal on the HP Mini’s lid. As I slipped the netbook from it’s bright red satin sleeve — which will protect it from scratches, but not any drops or hard knocks as it is not padded — fellow commuters looked and commented on it’s cute looks (as well as advising me to keep the demo unit!).

The screen is easy to see and read documents on — even in a mixed lighting environment of daylight and artificial light — and reflection is minimal. The keyboard is easy to use, and while it is not full sized, it is close enough for touch typists to easily navigate the keys. The gold lettering on the keypad is a bit difficult to distinguish on the red background in some lighting conditions. An experienced notebook PC user will adjust to using this keyboard faster than a newbie user who may need to read the keys more closely.

It is advisable to use headphones or ear buds while watching movies or listening to music as even at top volume levels, I had difficultly hearing the dialogue of our test video (an episode of The Wire) when there was a lot of ambient noise (and it’s probably better for your fellow commuters too considering the filthy language used in that show). Shut down time was very speedy; if I finished typing, saved my file as the train pulled into the station, I was logged off, packed up and ready to go as the doors opened.

Indeed, the unit is easy to use, as its keys are very comfortable and its touchpad feels smooth (we still hate the left- and right-click buttons either side of the touchpad), and its LED-backlit glossy screen is bright and produces plenty of contrast. It's not as good as the screen on the Acer Aspire One D150, but it is miles ahead of the screen on the ASUS Eee PC S101H. The unit does get a little warm when you use it on your lap, particularly towards the front, but it was nowhere near the heat produced by the HP 2133 Mini-Note PC.

For all you ladies out there who want a tiny computer (and apparently size does matter — it's smaller than the Acer Aspire One D150, and ASUS Eee PC S101H) that also looks good and is easy to use, the HP Vivienne Tam Special Edition Notebook PC is a sure bet. However, if you plan to use it to give presentations, be warned that it has no video out port, and if you want to use more than two USB 2.0 devices simultaneously, you'll have to swap one out (or plug in a hub). Look at the ASUS Eee PC S101 as an alternative if you need more features as well as some style.