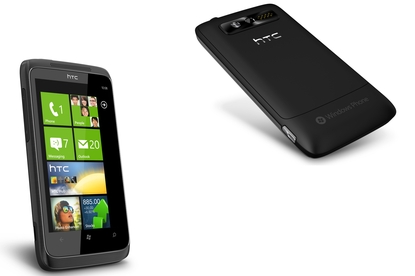 The HTC 7 Trophy smartphone has limited internal memory and a display that isn't as big or as sharp as competing handsets' screens, but the slick user interface of Windows Phone 7 makes it a good option nonetheless.

The HTC 7 Trophy is one of five smartphones launched in Australia that run Microsoft's new mobile operating system, Windows Phone 7. The 7 Trophy lacks the unibody aluminium design of the very similar HTC 7 Mozart but has a slightly larger display. It is sold exclusively through Vodafone.

Unlike the handsets that ran the older Windows Mobile operating system, all new Windows Phone 7 smartphones are forced to meet strict hardware requirements. These include a capacitive, multitouch display with a minimum 800x480 resolution, a 1GHz or better processor, at least 256MB of RAM, a minimum of 8GB of internal storage, and a GPS receiver. All Windows Phone 7 devices must also have an accelerometer and digital compass, an ambient light sensor, a 5-megapixel camera or better, an FM radio and seven physical buttons (back, Start, search, camera, power/lock, volume up/down).

These requirements make all Windows Phone 7 devices eerily similar to use. The HTC 7 Trophy attempts to sets itself apart from competitors with a thin design that features an attractive brushed black aluminium bezel, and soft plastic. The 7 Trophy looks similar to both the HTC Desire and the Telstra-exclusive HTC 7 Mozart, but lacks the latter's unibody aluminium design.

HTC also impresses us with some other nice design touches; the touch sensitive back, home and search keys are responsive and backlit, the physical camera key is raised and provides good tactility, and both the volume and power keys are well positioned and easy to press. Our only complaint is the fact the camera lens protrudes slightly, and doesn't have a cover.

The HTC 7 Trophy has a 3.8in SLCD capacitive touchscreen, so it's slightly larger than the iPhone 4 but smaller than the Samsung Galaxy S. The screen has good viewing angles, crisp colour and displays clear text, but it lacks the true vibrancy and wow factor of the Samsung Omnia 7's 4in Super AMOLED display.

The HTC 7 Trophy comes with "HTC Hub", providing basic weather information along with a range of HTC apps. The weather hub is complete with overly elaborate screen transitions and is location-based, so it will automatically update as you move. The HTC-developed apps are relatively basic, with attentive phone the most useful; this handy app allows you to activate settings that are standard on many of HTC's Android smartphones including reducing the ring volume when you pick up the phone, increasing the ring volume while the phone is in your pocket or bag, flipping over the phone to activate the loudspeaker during a call or flipping over the phone to mute the ringer during an incoming call.

The HTC 7 Trophy has a 5-megapixel camera with a single LED flash, and like all Windows Phone 7 devices it can record 720p HD video. The camera produces photos with good colour reproduction and detail for a mobile phone camera, but the settings menu is limited; it only offers scenes, effects, resolution, metering mode, and flicker adjustment.

The HTC 7 Trophy includes a disappointing 8GB of internal memory, and there is no microSD card slot for extra storage. Battery life is about what we have come to expect from a smartphone — the HTC 7 Trophy will quickly run out of juice if you use it frequently but should last a full day. For better battery life, we recommend turning off Wi-Fi and Bluetooth when not in use, and keeping the screen brightness down.