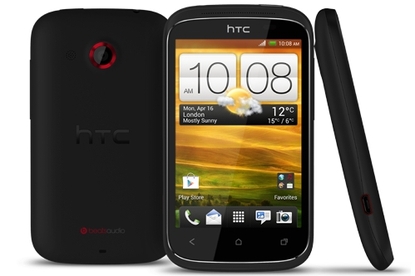 The HTC Desire C is a competitively priced pre-paid smartphone that offers a few features we aren't used to seeing on low-end Android devices. We like its design, build quality and the decent battery life it offers, but the sluggish user experience will frustrate most buyers.

Once upon a time, the Desire was the king of HTC's smartphones. The One series has taken that mantle in 2012, so the Desire is now reduced to propping up the bottom of HTC's smartphone lineup. The HTC Desire C retails for $229 but features the Beats Audio sound profile, comes with integrated 25GB Dropbox storage and has a 5-megapixel camera. It's a great looking device but an ultimately frustrating phone to use due to a sluggish user experience.

A Desire-able look and feel

The Desire C is one of the smallest and lightest smartphones we've seen this year.

Cheap smartphones don't always have to look and feel cheap and the HTC Desire C is a great example of this. Its smooth, rounded corners and pebble-like shape means it fits comfortably in your hand. Combined with a light weight that tips the scales at under 100g, the Desire C is one of the smallest and lightest smartphones we've seen this year. It almost feels comforting to hold, which is a great feat considering its budget price tag. There aren't too many low end smartphones out there that have such an appealing build.

The Desire C as it has a number of small but appreciated touches. The metallic trim surrounding the screen, the red accent around the camera lens and the sunken, gloss black HTC logo are just a few examples. Perhaps the coolest feature is the inside of the Desire C when you remove its battery cover — its finished in the same matching red colour as the camera lens, the Beats Audio logo and the inside of the micro-USB port. Even the battery is red, too. Yes, you'll never see inside unless you take off the battery cover, but we still think it's a nice touch. Annoyingly, the battery cover does creak when you apply even a minor amount of force, especially on the right side.

The HTC Desire C has a perfectly positioned power button on the top that provides good tactility, and the volume button on the right side blends in nicely with the plastic finish. This matte finish does attract some marks and smudges but it makes the phone easy to grip. We're normally not a huge fan of touch-sensitive menu keys, but the back, home and recent app buttons below the Desire C's screen are both responsive and efficient. They're not backlit though, which makes using them in low light a bit of an issue.

The most common caveat of cheap Android phones is a small and cramped display. The HTC Desire C doesn't fall directly into that category thanks to a decent sized 3.5in screen, the same size as the Apple iPhone 4S. However, while general use such as swiping through home screens and lists is relatively unaffected, the screen remains cramped for text input. HTC's poor on-screen keyboard takes up almost half the screen when it appears, so typing long blocks of text isn't a pleasant experience. There's no option to switch to Google's default ICS keyboard, either, so you'll need to download a third-party option from the Play Store if you aren't satisfied.

The display itself is about what you'd expect from a smartphone at this price. Text isn't overly crisp, viewing angles are poor and the screen is quite reflective, especially indoors under fluorescent lighting. The Desire C's display isn't overly bright either, even with the brightness turned all the way up, though it does a reasonable job at reproducing accurate colour.

A downgraded but still sluggish Sense

The HTC Desire C runs the 4.0 Ice Cream Sandwich version of Google's Android operating system and is skinned with HTC's now familiar Sense UI. Much of the look and feel of the interface is similar to other HTC phones, like the One S and the One V. We love some of the software's less advertised touches, such as asking whether you'd like to save an incoming phone number as a new contact, the convenient four dock icon shortcuts on the lock screen and a slick suite of widgets, including HTC's almost iconic clock and weather widget.

Due to the Desire C's low price, limited 600MHz single-core processor and 512MB of RAM, HTC has removed some features from the Sense UI. There's none of the fancy animations when swiping through home screens, you can't pinch the screen to see all of your home screens and the lockscreen shortcuts can't be customised. The latter is a real downside, but none of the other features are missed given the budget price.

The Desire C is a slow phone to use.

Despite HTC removing these features in a bid to ensure stable performance, the Desire C is a slow phone to use. Swiping through home screens isn't terribly sluggish, but there's a definite delay. Using the recent apps menu, opening and closing the app drawer and even opening basic apps like text messages and email is also a slow experience. We certainly didn't expect it to be the fastest phone on the market, but the Huawei Ascend G300 offers a much smoother experience than the Desire C for far less, for example.

There's a number of extra apps included on the Desire C. We like the addition of TuneIn Radio, a voice recorder, the Polaris Office suite and the Adobe Reader PDF viewer but the likes of HTC Hub, Task Manager, Setup and Friend Stream are easily removed and simply fill up the app drawer. Being a Telstra phone, the Desire C hasn't escaped the big T's customisation either, but the TelstraOne app, Mobile Foxtel and Garmin Navigator are thoughtful inclusions and can easily be uninstalled if you wish.

The HTC Desire C officially has 4GB of internal memory, but less than 1GB of it is available for app storage. You'll definitely need a microSD card but annoyingly, there isn't one included in Telstra's sales package. Without a microSD card there isn't enough room on the Desire C to install large games and the phone even refused to save a screenshot. The built-in Dropbox integration along with 25GB of free storage is a nice alternative, especially at this price, but it isn't enough to compensate for the lack of a microSD card.

The HTC Desire C has a 5-megapixel camera but it takes truly awful photos. There's no touch-to-focus option and no matter how hard we tried to keep the phone steady when snapping a shot, almost all of our photos were out of focus. The camera app itself is snappy and we like the range of real time image effects available including greyscale, sepia, negative and solarise. There's a video recording option too, but the quality is perhaps even worse than photos.

The Desire C includes Beats Audio qualities, a direct result of HTC's partnership with the Beats By Dr. Dre audio company. The Beats Audio profile claims to enhance bass but we didn't notice a huge amount of difference in audio quality when it was active. Unlike some of HTC's other Beats smartphones, the Desire C doesn't come bundled with a pair of Beats headphones.

The Desire C has a 1230mAh battery that HTC says provides a talk time of up to 350 minutes. We managed to push the battery to a full day of use before needing a recharge, but if you're a heavy user you may not achieve the same results.

The HTC Desire C is available now through Telstra stores and online for $229 outright.