The HTC Desire Z is an excellent smartphone, mainly due to a combination of Google's excellent Android platform and HTC's Sense UI. However, its biggest selling point -- the "pop-out" physical QWERTY keyboard -- has a poorly designed hinge mechanism that detracts from the handset's overall appeal.

The HTC Desire Z aims to offer most features of the company's flagship Desire HD smartphone with the added benefit of a pop-out QWERTY keyboard to aid text entry. Unfortunately, while the Desire Z remains an excellent smartphone, the keyboard has a poorly designed hinge mechanism that detracts from the phone's appeal.

Read our HTC Desire HD review and check out other top HTC phones..

UPDATE: The HTC Desire Z is exclusive to Vodafone and is available for $0 upfront on Vodafone's $49 cap over 24 months, or $0 upfront on the telco's $65 'Infinite' plan, which includes unlimited calls, unlimited text and unlimited access to social networking sites including Facebook, Twitter, LinkedIn, MySpace and Foursquare.

The HTC Desire Z is a chunky smartphone that feels quite heavy. Its 3.7in display is smaller than the Desire HD's, but the phone is much thicker. Like most HTC phones, it features a few nice design touches — a brushed aluminium battery cover and front fascia, rounded edges, and smooth, hard plastic.

The key feature of the HTC Desire Z is its "pop-out" QWERTY keyboard. It utilises a Z-style hinge (hence the phone's name) to fold out, over and then onto itself. The motion of the hinge is smooth, but the design means it is difficult to open with one hand. The keyboard itself is well designed, but not exceptional; while each key is large and well spaced, they aren't raised enough to provide great tactility and they offer minimal travel when pressed. We liked the two shortcut keys to the right of the space bar; these can be assigned to open an app or shortcut. Overall, though, we much prefer the design and layout of the keyboard on the Motorola Milestone 2.

The HTC Desire Z feels very well constructed until you pop open the keyboard; the hinge feels loose and the screen wobbles back and forth, even when only slight pressure is applied. If you're lying down and typing, the hinge also closes on your fingers. The Desire Z's hinge feels like an unfortunate design flaw. With software based keyboards continually improving, manufacturers that opt for a physical keyboard really need to make it exceptional; in this case HTC has not. 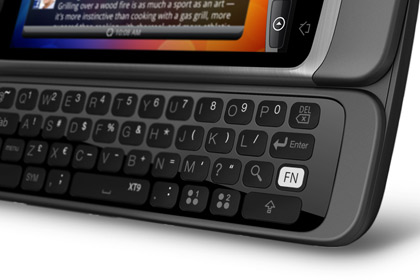 The hinge of the HTC Desire Z's keyboard leaves a bit to be desired (bad pun intended).

The HTC Desire Z has a 3.7in SLCD screen. It lacks the vibrancy of the Samsung Galaxy S's Super AMOLED screen and the iPhone 4's IPS screen, but it produces crisper text than the Desire HD. Viewing angles are excellent, though the display can be a little hard to see in direct sunlight. A minor design complaint is the fact that your fingers brush against the slightly raised casing when swiping across the screen, which can become annoying when you are constantly moving between home screens.