A massive 4.3in screen and HTC's superb Sense UI combine to make this the best Windows phone on the market The HTC HD2 is quite simply an outstanding smartphone. The superb construction and gorgeous display combine with HTC's Sense UI to create an excellent user experience. You'll still be frustrated from time to time with the Windows UI lurking in the background, but this is by far the best Windows phone on the market.

Let's just get this out of the way first: the HTC HD2 is by far the best Windows Mobile smartphone we've tested. In fact, we'd go as far as saying there is daylight between it and the next best Windows Mobile phone. Sporting a massive 4.3in display that dwarfs the iPhone in both size and quality, HTC's superb Sense UI and a fast 1GHz Snapdragon processor combine to make this the most pleasing Windows smartphone we've ever used.

The HTC HD2 has two main strengths: its hardware and HTC's Sense user interface. The HD2's 4.3in capacitive screen is bright, clear and sharp and its performance outshines the iPhone 3GS'. Importantly, it's responsive to touch, though it doesn't handle fingerprints as well as the iPhone.

The HTC HD2 is incredibly thin. Its build quality is superb, with a combination of glass, rock-hard plastic and an aluminium battery cover that doesn’t rattle or creak. The dark grey and black finish looks professional and very stylish — it shouldn't just appeal to business users. Our only complaint is the camera lens, which protrudes slightly from the back of the phone and can catch the edge of your pants when you slide it in and out of your pocket.

A capacitive display means the HTC HD2 doesn't require a stylus to use, so almost all of the interaction involves the touch screen. A row of buttons at the bottom of the display includes answer and end call keys, as well as dedicated home, back and Start keys. The buttons offer next to no travel when pressed and don't provide the best tactility. Aside from perfectly placed volume controls on the left, these are the only physical buttons on the HD2 — which is rather unusual for a Windows phone. 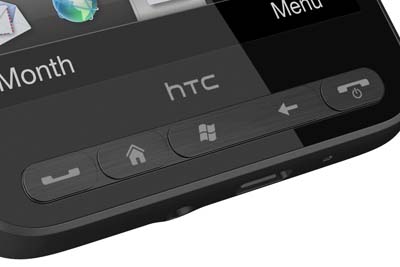 The HTC HD2 has answer and end call keys, and dedicated home, back and Start keys. The buttons match the look and feel of the phone, but don't provide the best tactility.

The HD2 is the first Windows phone to feature HTC's Sense UI, first seen on the Android-based Hero smartphone. Unlike many other interface layers that are often flimsily glued over the Windows Mobile UI, almost every aspect of the standard Windows interface has been upgraded or tweaked. Most of these changes not only look superb, but they make using the HD2 a pleasant experience.

The HTC HD2's home screen has a large flip-style clock and a widget underneath it that displays the current weather. The weather widget is location-based, so it automatically updates as you travel. We also loved the weather theme, which places clouds, rain, or sun in the background of the home screen depending on the current weather forecast. Below the weather icon is a calendar widget that shows the date as well as any upcoming appointments, along with nine customisable shortcuts that can include programs, contacts or Web bookmarks. Three shortcuts appear on the home screen, while swiping up reveals the remaining six. 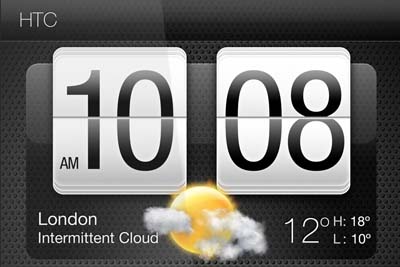 HTC's weather widget sits just beneath the flip-style clock on the home screen, and automatically updates as you travel.

The rest of the HTC HD2's main functions sit in the familiar tabbed row of icons across the bottom of the screen. You can press down on the active tab and slide your finger left or right across the tabs, or simply tap an icon to select a function. The interface includes people, messages, mail, Internet, calendar, photos and videos, music, weather, Twitter, stocks, footprints and settings menus. HTC also provides access to the regular Windows Start menu should you need it, available by tapping the Start button in the top-left corner or pressing the dedicated key below the display.

The most pleasing aspect of the Sense UI is just how responsive it is: normally taxing tasks such as opening the camera application, loading a Web page or opening an e-mail message are performed quickly and quietly. There is no lag or slowdown and the overall user experience is immensely satisfying. 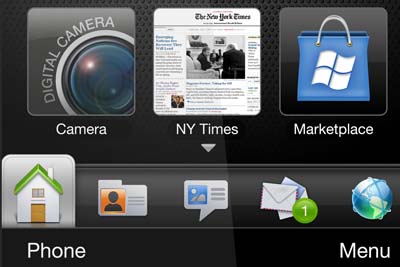 Nine customisable shortcuts can include programs, contacts or Web bookmarks, while the familiar tabbed row of icons across the bottom of the screen offers access to other key functions including contacts, e-mail and the Web browser.

Text input has long a source of frustration when using Windows Mobile phones, but HTC has nailed it with the HD2. Aided by the large screen, the virtual keyboard is comfortable to type on in both landscape and portrait modes, though we preferred the latter due to the positioning of entire keyboard to the left of the screen in landscape mode. Text correction is excellent and definitely on par with the iPhone, while haptic feedback is helpful for people uncomfortable using a touch-screen keyboard.

The HTC HD2 also includes multitouch, which works in the Web browser, Google Maps and photo applications. You can pinch to zoom in and out, double tap to hone in on a particular area and drag you finger around to move. It's not as slick or smooth as the iPhone, but its pretty damn close.