HTC One V review: The baby of HTC's One range features a quality design and a long list of features The HTC One V may be smaller and cheaper than the rest of the company's One range, but it's certainly very well constructed. A few quirks detract from the overall user experience but on the whole, this is an excellent budget Android phone and should certainly please most users.

The HTC One V may be the company's latest budget Android phone, but it certainly doesn't look or feel cheap. Boasting an attractive, aluminium unibody design that was made famous by the HTC Legend, the HTC One V features most of the same software enhancements used across the entire One range.

Girl look at that body

The HTC One V may be smaller and cheaper than the rest of the company's One range, but it's certainly tough to describe this as a budget smartphone. The unibody aluminium design is a HTC trademark that we've come to know and love over the years and the end result is no different on the One V. Build quality feels superb, with no creaks or rattles when the casing is pressed. The end result is a smartphone that feels like a premium device, making a mockery of its supposed "budget" market position.

The One V gets its inspiration from the HTC Legend, a phone that launched back in 2010 and was widely regarded as one of the best looking devices of its time. Like the Legend, the One V has an angled lip at the bottom. It's less pronounced on the One V but gives the phone a distinct look. We feel it only adds to the overall character of this device, especially since the edge angles towards your mouth when the phone is held up to your ear. The downside to the design is that the battery is not removable. 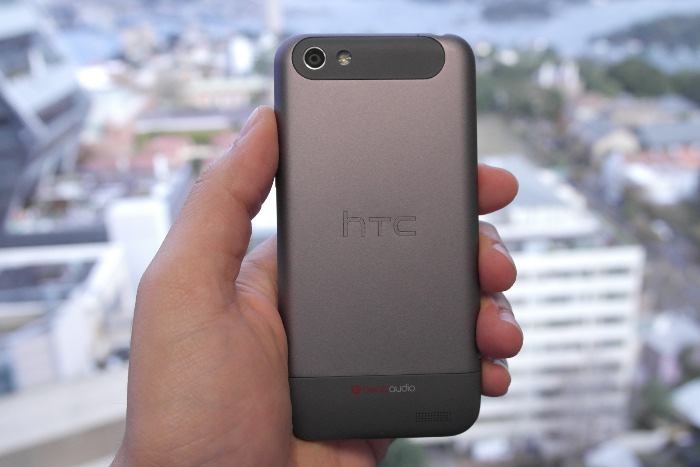 Like the One X, the One XL and the One S, HTC deserves a lot of credit for a few classy touches. The power and volume buttons are perfectly positioned, easy to press and provide excellent tactility. The capacitive shortcut keys (back, home, multitasking) are responsive and backlit. There are no annoying flaps or doors hiding the headphone jack or the micro-USB port. However, the screen is slightly raised and the edges are sharp and tend to dig into your fingers regardless of how you grip the One V. It's not a huge issue, but it can quickly become uncomfortable.

The HTC One V has a 3.7in TFT display with a resolution of 480x800. It's obviously no match for larger, higher resolution panels that adorn the latest flagship Android phones, but it was never intended to be. Considering the One V is a budget, entry-level handset, its screen is bright, clear and responsive. In fact, the display is undoubtedly one of the best features of this phone.

The HTC One V runs Google's 4.0 Ice Cream Sandwich software, which makes it one of the first low-end smartphones to natively run the latest version of Android. The One V again features the Sense 4.0 UI, which HTC says attempts to simplify an interface that was previously considered too cluttered. 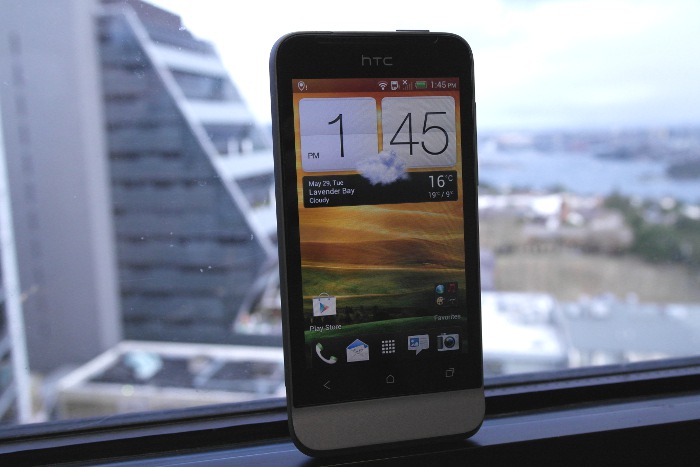 The new version of HTC's Sense is very similar to the one seen on the One X, with a few exclusions. We love some of the software's less advertised touches, such as asking whether you'd like to save an incoming phone number as a new contact, the convenient four dock icon shortcuts on the lock screen and a slick suite of widgets, including HTC's almost iconic clock and weather widget.

Despite the One V's low-end specifications, this isn't a sluggish smartphone. Everyday actions like unlocking the home screen, opening and closing apps and swiping through home screens doesn't result in too much lag or slowdown. The One V isn't as blazing fast as HTC's top-end models, but it was never intended to be and performance won't pose an issue for the large majority of users. 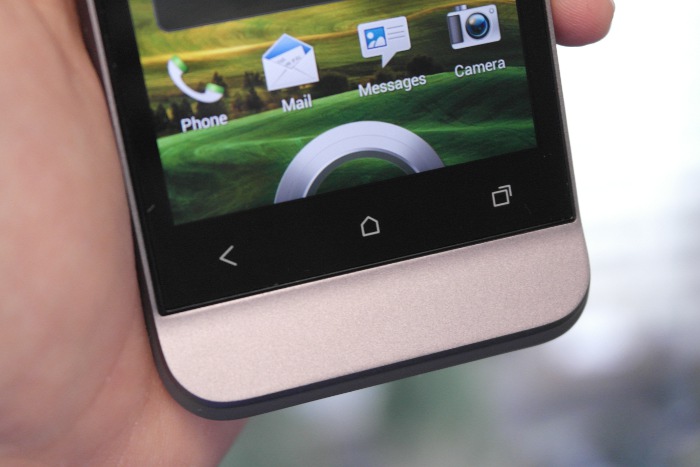 While Sense is fairly user friendly, we still feel HTC has made plenty of changes for changes sake. The phone app offers excellent linking of contacts from multiple sources but the interface feels cluttered and doesn't achieve any consistency with the regular Android UI. The default Ice Cream Sandwich keyboard has been replaced by HTC's keyboard and is neither better looking or better implemented. Thankfully, the One V uses the regular Android multitasking menu which is both better implemented and more efficient than the version used on the company's higher end One phones.

Where the One V falls down is its paltry level of internal memory. The phone has 4GB of internal memory but only 1GB is available for app storage. You'll definitely need a microSD card if you want to install plenty of apps. Our review unit didn't come with a microSD card and without it there wasn't enough memory to install games like Need For Speed Shift, for example. Speaking of gaming, while titles like these are certainly playable, the overall level of performance isn't as smooth as we would have hoped. We suspect the rather low 512MB of RAM has plenty to do with this. 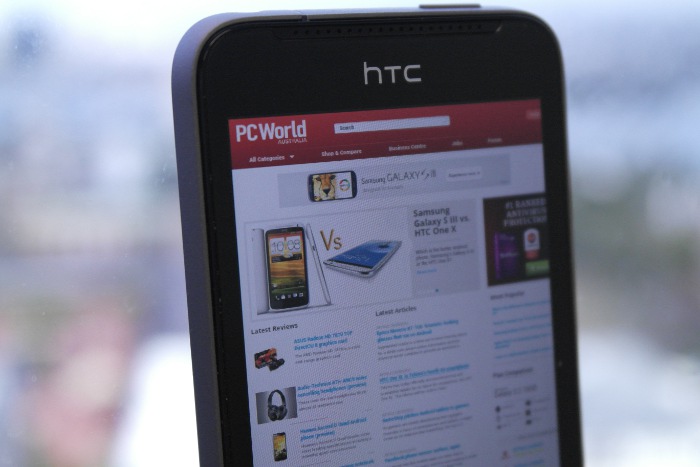 The HTC One V only has a 5-megapixel camera compared to the 8-megapixel snapper on the other One models, but the good news is that the One V retains most of the software features from the One range. Users can bypass the lock-screen and immediately jump into the camera app, though we did notice there was slight shutter lag when taking photos that wasn't present in other models. The One V allows you to take a photo while shooting HD video (called "double shutter") and can even allow you to capture a still image from an already recorded video. Holding your finger on the on-screen shutter button will enable burst mode. We also like the ability to add a range of real time effects including distortion, vignette, depth of field and sepia.

The quality of images captured by the HTC One V are a step below the rest of the HTC One range, however. Colour reproduction is acceptable and in many cases vibrant, but image noise is a real issue leaving most of the photos grainy and lacking in detail. Video recording quality is passable, though autofocus is very erratic with movement and struggles to deal with any changes in light. Disappointingly, the One V lacks a front facing camera for video calls. 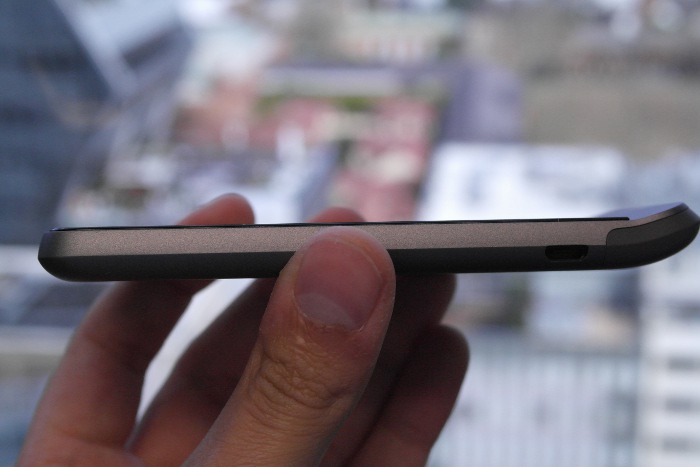 The HTC One V comes with Dropbox integration and 25GB of free storage, while the music player can sync iTunes playlists automatically. The One V includes Beats Audio qualities, a direct result of HTC's "strategic partnership" with the Beats By Dr. Dre audio company. The Beats Audio profile noticeably enhances bass and works in all applications, not just the music player. However, unlike last year's HTC Sensation XL, the One V doesn't come bundled with a pair of Beats headphones.

The HTC One V has reasonably impressive battery life. We managed to achieve almost a full day of moderate use before needing a recharge. Power users will undoubtedly still need to recharge before the end of the day, but most other users should be well served.

The HTC One V is exclusively sold in Australia through Optus, though you can also purchase it through online mobile phone store MobiCity.