HTC's Touch HD boasts a massive screen -- but can this smartphone knock the iPhone off its perch? 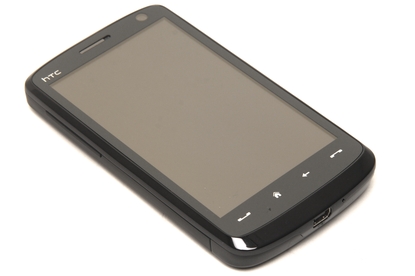 The Touch HD is one of HTC's best efforts yet — its superb display in particular looks outstanding. Unfortunately, it's still not perfect and you'll pay through the nose for its features.

Boasting a screen larger than the iPhone 3G's, HTC's Touch HD is attempting to steal the limelight from Apple's handset. Although the screen isn't full high definition, it is one of the best on the market. Combined with HTC's TouchFLO 3D interface, the Touch HD is one of HTC's best efforts yet.

The Touch HD offers a sleek and stylish design, but obviously the main attraction here is the display. At a massive 3.8in and with a resolution of 480x800, this is among the best mobile phone displays we've ever seen. It is unbelievably crisp and clear and colours are stunningly accurate. Viewing angles are excellent and the screen performs well in direct sunlight.

The HD's design is similar to the iPhone, though slightly larger. With the display taking up most of the Touch HD's real estate, there are few buttons on the device. A power key and volume controls are the only physical buttons, and a row of touch-sensitive keys sit just below the display — answer and end call keys and dedicated home and back buttons are straightforward to use and offer haptic vibration feedback when pressed.

HTC's TouchFLO 3D interface once again looks superb and its design and layout are excellent. On the Home tab, a large flip-style clock displays the time; swiping your finger upwards allows you to view calendar appointments. For the rest of the functions a row of icons sit in a tabbed interface across the bottom of the screen. You press down on the active tab and slide your finger left or right across the tabs to cycle through menu selections. The animations are excellent, particularly when cycling through music albums and e-mail messages. Unfortunately, the uber-cool weather tab has been removed in the Touch HD and has disappointingly been replaced by a shortcut in the Telstra news and sport tab.

HTC has clearly gone out of its way to push Windows Mobile into the background, but it's ultimately not enough. Despite commendable graphics and the stylish user interface of TouchFLO 3D, once you delve deeper into most applications you'll quickly realise this is still a Windows Mobile handset. As such, when you delve deeper into many functions you'll need to use the stylus. An example is typing — although HTC has redesigned the standard Windows Mobile on-screen keyboard, we still had trouble typing messages and e-mails accurately with our fingers and preferred to use the stylus.

A significant improvement over previous models is speed and performance. Unlike previous HTC devices, we didn't experience too much lag or slowdown when opening and closing applications and selecting menu items.

The design and interface aren't the only appealing aspects of the Touch HD — this device is packed with features. HSDPA capabilities, Wi-Fi, Bluetooth with A2DP, built-in GPS and a 5-megapixel camera are all part of the package. Multimedia is well supported, too, and the 3.5mm jack is an excellent inclusion. Videos on the screen look superb. Although the included headphones aren't great, you can easily replace them with a better pair. HTC also includes an 8GB microSD card in the sales package.

Running Windows Mobile 6.1 Professional, the Touch HD includes all the features synonymous with this operating system. E-mail is easy to set up and configure, while Windows Media Player, Messenger, Office Mobile and Adobe Reader are all present. HTC has also included the Opera browser for mobile Internet use. It is not as intuitive as Safari on the iPhone but it is far better than the standard Internet Explorer Mobile offered as part of the basic Windows Mobile package.

The handset is exclusive to Telstra's Next G network until April 30, and there is a wide range of BigPond content available, including Mobile FOXTEL. It looks reasonable on the Touch HD's large display, but cost is an issue at $4.95 for a day pass or $12 for a monthly subscription. Another disappointment is the lack of GPS software — Telstra will soon make WhereIs Navigator available, but at $15 per month it won't come cheap. Nor is the phone itself — at $1499 outright or available on Telstra's $150 member plan, you'll sadly need to break the bank for the Touch HD.