Huawei's Ascend P1 is light and offers good performance, but its let down by questionable build quality The Huawei Ascend P1's light weight, good performance and decent battery life make it a phone well worth considering. However, the Ascend P1 isn't as competitively priced as many of Huawei's other Android phones and its questionable build quality detracts from its overall appeal.

Chinese smartphone manufacturer Huawei isn't a well known brand in the Australian market and has traditionally focussed on budget smartphones. That makes its latest Android phone, the Ascend P1, a significant release. It's just 7.7mm thick, runs Google's Ice Cream Sandwich software and has a large, 4.3in Super AMOLED display.

Thin is in but hollow isn't

The Huawei Ascend P1 is one of the lightest smartphones we've reviewed, tipping the scales at a featherweight 110g. It's also shorter in both height and width when compared to most other Android flagships on the market, such as the HTC One X and the Samsung Galaxy S III. Although this is partly due to the smaller 4.3in screen, Huawei definitely deserves some credit for the Ascend P1's svelte frame. If you're put off by the large size of today's top smartphones, the Ascend P1 is definitely worth a look.

The Ascend P1's curved edges make the phone comfortable to hold, but there are a number of issues that detract from its overall design. The back cover is coated in a glossy white plastic that makes it very slippery to hold, the casing itself feels hollow and cheap and the phone annoyingly rattles when moved. The rattling occurs during everyday tasks like picking the phone up off a desk or table, so this sadly isn't a minor issue. The rattles are caused by loosely implemented power and volume buttons on either side, a further black mark on the build quality. The annoying plastic flaps covering the top-mounted SIM card slot and microSD card slot on the right side also give the Ascend P1 a rather cheap feel. 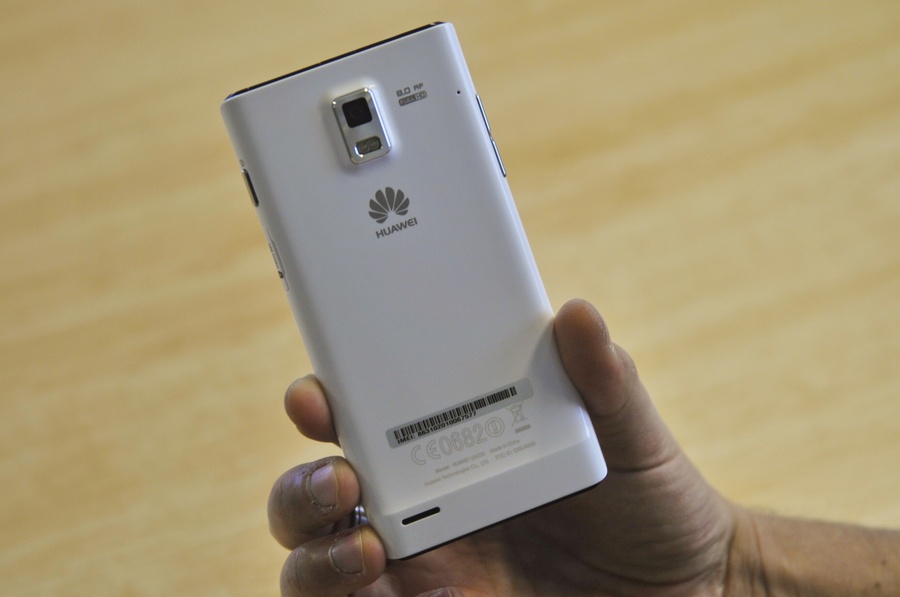 The Huawei Ascend P1 is extremely thin and light, but its build quality is questionable.

The Huawei Ascend P1 has a 4.3-inch Super AMOLED touchscreen with a qHD resolution of 960x540. The screen is coated with gorilla glass in a bid to prevent scratches and cracks. The display obviously can't compete with the very best screens on the market but it isn't a real weak point of the phone. The Ascend P1's panel has excellent viewing angles, vivid colour and is relatively bright, though admittedly not as eye catching as higher priced rivals. The biggest weakness is definitely the visible aberrations and pixels when the phone displays text. If you're constantly reading you'll definitely notice the issue, but for general day to day use this won't be a significant problem.

The Huawei Ascend P1 comes with the Ice Cream Sandwich version of Android out of the box. The software largely uses Google's standard UI design but Huawei also includes a "3D Home" launcher, available by accessing the options menu from any home screen. It's ultimately a personal preference but we much prefer the standard Google ICS interface as the 3D home is noticeably slower and doesn't at all tie in with the look and feel of Ice Cream Sandwich. Huawei should be commended for giving users an option to seamlessly switch between the two launchers, however. 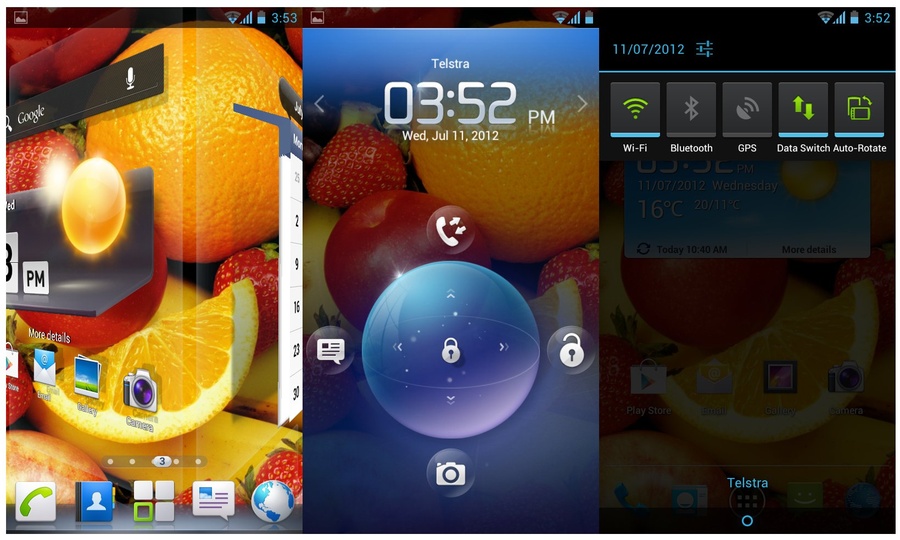 From left to right: The Huawei Ascend P1's 3D UI, the lock screen and the toggles in the notifications panel.

The regular 2D UI is largely a standard affair, with a few exceptions. Huawei has added Wi-Fi, Bluetooth, GPS, mobile data and auto-rotate toggles in the notifications panel (which can be turned on and off but not edited) and the lock screen is the company's own. It allows you to swipe up to jump straight to your call log, left to open a new message window, down to open into the camera and left to simply unlock the device. They're a nice touch, but we would have appreciated the ability to edit the lockscreen shortcuts. Huawei has also included its own on-screen keyboard, which is far worse than Google's stock one. Thankfully, you can switch to the standard ICS keyboard with a few quick taps in the settings menu.

The Australian model of the Huawei Ascend P1 comes preloaded with a few extra apps over what Google provides by default. These include Huawei's backup and restore app, the company's DLNA app for sharing files wirelessly through compatible devices, a file manager, an FM radio, a flashlight, Huawei's PC suite software, the Polaris Office suite, the Riptide GP game and a sound recorder. We'd uninstall some of them without a second look, though the flashlight, file manager and Polaris Office apps are well worth using and nice extras. 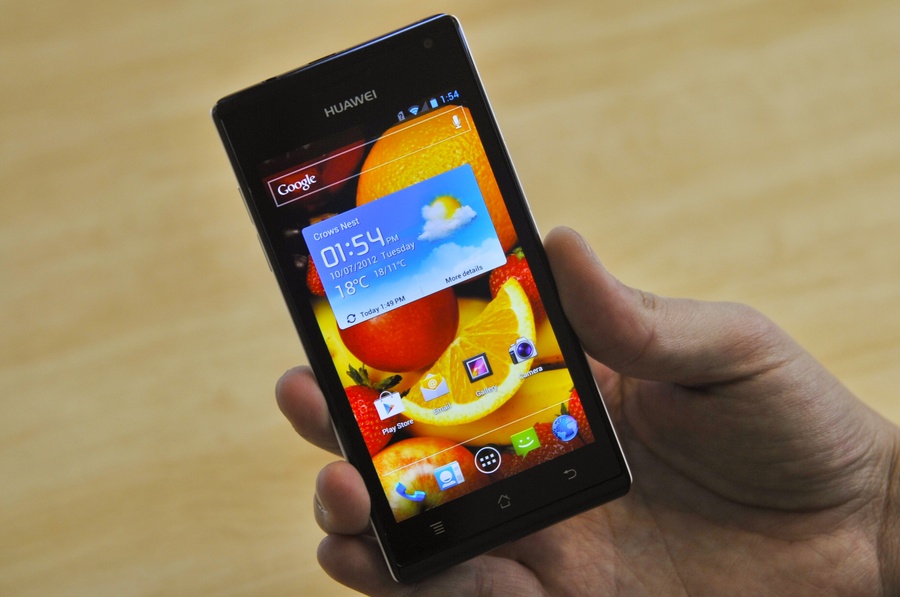 You can seamlessly switch between 2D and 3D home screen launchers on the Huawei Ascend P1.

One app worth mentioning in more detail is Huawei's Music+ app. It replaces Google's stock Android player and adds a few nice features including visualisation, the ability to swipe through album art and best of all, the Dolby Mobile 3.0 audio setting. This setting significantly boosts the audio volume, especially when played through the phone's speaker. However, the feature only works in the Music+ app and when watching videos through the default gallery app. It won't work in third party music streaming apps like Spotify and Rdio.

When using the Huawei Ascend P1 in 2D mode, we experienced minimal lag or slowdown. Apps open quickly, home screens scroll smoothly and aside from some common Android quicks, like zooming in the browser and auto-rotating the screen, the Ascend P1 is a fast device. The phone can also handle most graphically intense games with ease, including the popular Shadowgun and the preloaded Riptide GP.

A decent, but not outstanding camera

The Huawei Ascend P1 has an 8-megapixel rear-facing camera with dual LED flash and a 1.3-megapixel front-facing camera for video calling. The rear camera doubles as a 1080p video recorder, though the quality of videos isn't the best we've seen on a smartphone this year. In particular, there is noticeable loss of detail around the edges of recorded clips. 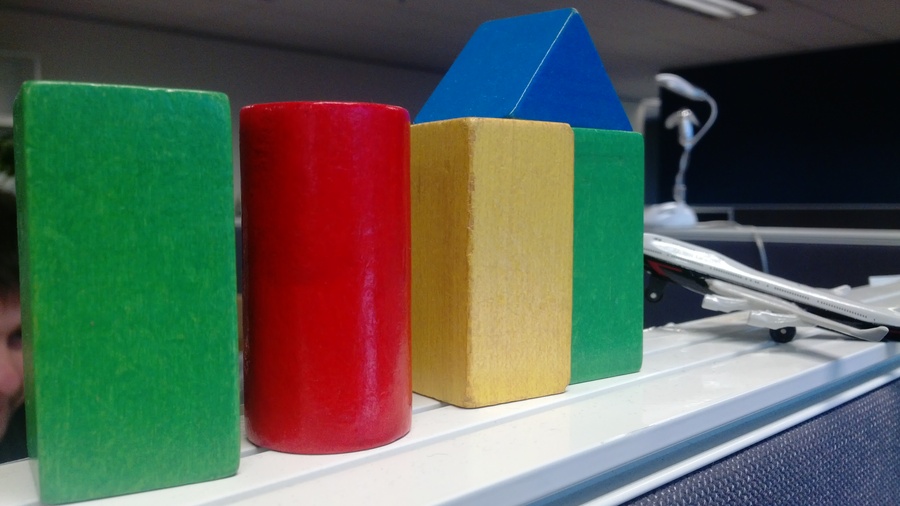 A photo we captured with the Huawei Ascend P1's 8-megapixel camera.

The camera on the other hand produces images that we'd happily recommend. We were particularly impressed with the high levels of detail and good colour reproduction in most of our photos, though the autofocus can be erratic at times. As a side note, Huawei claims the use of an image enhancement setting in the display menu claims to make images "more vivid". However, we didn't notice any significant benefit to using this feature. One other notable feature is a fast boot setting, which impressively powers the phone on in around seven seconds.

The Huawei Ascend P1 disappointingly only has 2.3GB of internal memory. If you get happy snappy you'll need to purchase a microSD card slot which isn't included in the sales package. 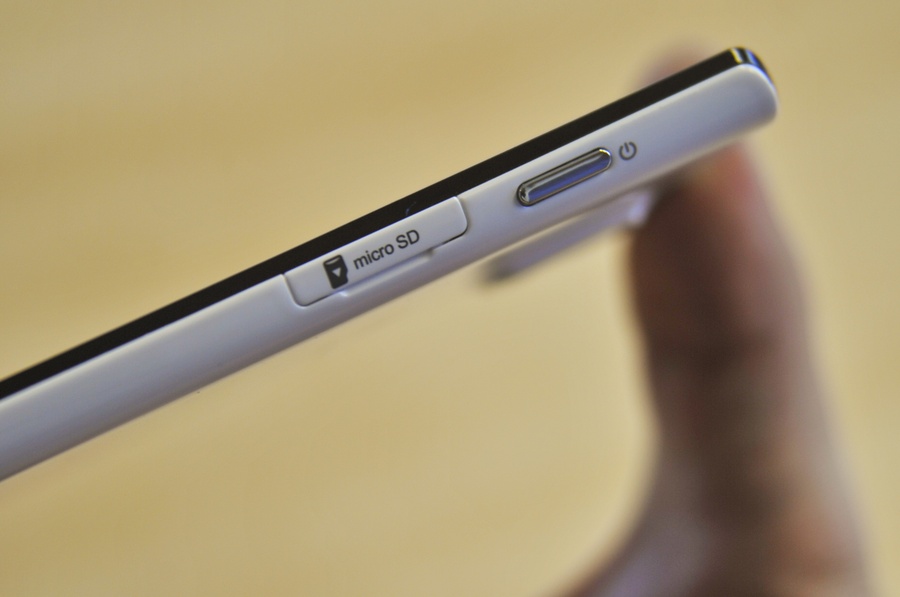 The Ascend P1 only has 2.3GB of internal memory, but a microSD card slot allows you to add more if you wish.

The Ascend P1 is powered by a 1670mAh battery and Huawei has included a power saving mode in the settings which allows you to choose from three presets. Battery saver, balanced and performance modes are the options. We used the phone on balanced mode for the most part and found that the Ascend P1 was usually good enough to last us a full day. You may be able to get more use out of the battery if you experiment with the battery saver mode.

The Huawei Ascend P1 smartphone is available now for $499 as an outright purchase through Dick Smith retail stores. The device is a quad-band HSDPA phone so it will work on all three major Australian networks — Telstra, Optus and Vodafone.