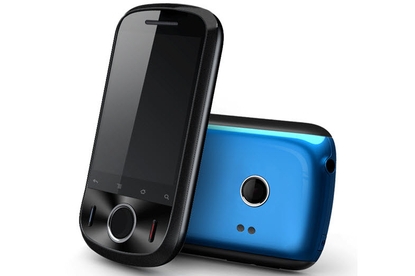 Huawei's IDEOS smartphone has a small, low-res display and lacks multitouch, but it still represents excellent value. It runs the latest version of Android and it is reasonably well built; it's an absolute bargain at this price.

Low-end Android smartphones are becoming more popular and Chinese manufacturer Huawei is one of the first to release a budget-priced handset that runs the latest version of Google's Android operating system. The Huawei IDEOS U8150 smartphone is equipped with Android 2.2, called Froyo, as well as a 2.8in capacitive touchscreen and a 3.2-megapixel camera. It is let down by a small, low-res display but the IDEOS still represents excellent value for money.

Check out our round-up of other cheap Android phones.

Aesthetically, the Huawei IDEOS smartphone is as basic as they come. Its glossy plastic casing is standard for a phone in this price range, and Huawei includes three interchangeable rear covers in the sales package in blue, yellow and pink colours. The IDEOS's curved and rounded shape means it sits nicely in your hand, but it is not a particularly attractive phone.

Despite having the kind of plastic body you would expect at this price point, build quality is not compromised — the IDEOS doesn't creak or rattle and feels reasonably well constructed. Below the screen are Android's standard, touch-sensitive shortcut keys (back, menu, home and search), and Huawei has also included thin answer and end call keys either side of a large five-way navigational pad.

Manufacturers of low-end smartphones generally compromise when it comes to a handset's display in order to keep prices down, and Huawei is no exception. The IDEOS includes a 2.8in capacitive touchscreen with a very low resolution of 320x240, the same as the HTC Wildfire Android smartphone. The screen is responsive to finger presses but has poor viewing angles, is hard to see in direct sunlight and displays text with clearly visible aberrations. The IDEOS's display is fine for most general usage, but it is inferior compared to many Android phones when it comes to viewing photos and videos and browsing the Web.

The Huawei IDEOS is one of the first smartphones to ship with the latest version of Google's Android operating system, 2.2 or "Froyo". In addition to all the regular features and functions of an Android phone including access to the Android Market for third-party apps, an excellent notifications taskbar and automatic and seamless synchronisation with Google services, Froyo adds built-in wireless tethering, and the ability to store third-party apps on your SD card, as well as general performance improvements. One benefit of Froyo that doesn't apply to the Huawei IDEOS is full Flash support for Web browsing. Huawei says that the IDEOS doesn't have enough processing power to offer full Flash support. Unlike HTC's range of Android smartphones, which are skinned with a UI overlay offering extra widgets, the phone ships with the vanilla Android interface; it isn't an issue at all, as the standard Android UI is functional, easy to use and fully customisable.

The IDEOS' small screen combined with a lack of multitouch support (so you can't pinch the screen to zoom in and out) mean the Web browsing experience is noticeably inferior compared to Android smartphones with larger screens. Performance is adequate, but not outstanding; the Huawei IDEOS is a little sluggish to activate the accelerometer when tilted, and we also experienced occasional lag during testing, particularly when using the browser.

The Huawei IDEOS is available through Crazy John's and Australia Post for $159, making it the cheapest Android phone on the Australian market at the time of its release. Online mobile phone retailer MobiCity is also selling the Huawei IDEOS outright and unlocked.