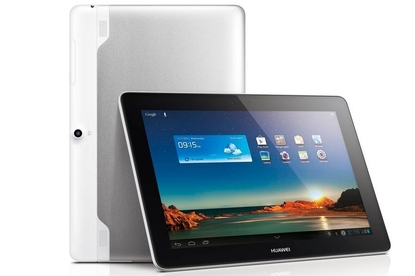 The Huawei MediaPad 10 Link 4G tablet may offer impressive 4G data speeds through Vodafone, but this is an otherwise mediocre tablet. It's hampered by a poor quality, low resolution display and has questionable performance. Look elsewhere.

Vodafone claims the Huawei MediaPad 10 Link 4G is the "fastest tablet in Australia" due to the fact it supports the LTE Category 4 mobile data standard, the newest class of 4G. While data speeds are certainly impressive, the MediaPad 10 Link 4G is otherwise hampered by a poor quality, low resolution display and questionable performance.

There's really little that stands out about the MediaPad 10 Link 4G.

The first thing you'll notice about the MediaPad 10 Link 4G is...not much. There's really little that stands out about the device. It looks like your standard, run of the mill Android tablet with a thick, gloss black bezel surrounding the 10.1in screen, along with a silver and white back. You can easily make the comparison to Apple's 4th Generation iPad, but there's only so much you can do with a tablet form factor.

The MediaPad 10 Link 4G weighs 640g, so it's slightly lighter than the cellular version of the latest iPad. The tablet is reasonably comfortable to hold and use, though the plastic edge is a little sharp and can dig into your palms depending on the way you hold it. The premium looking aluminium finish on the back is broken up by a white plastic strip along the top which houses two built-in speakers on either end. The speakers offer reasonably loud volume, but quality is poor and sound quickly becomes distorted.

Build quality is reasonable. The plastic flap on top covering the SIM card and microSD card slot feels cheap and flimsy, and the right mounted volume rocker is a little loose, but the rest of the device feels sturdy enough. A power/lock screen button also sits on the right side, while a standard 3.5mm headphone jack and a micro-USB port for charging are located on the left side. The tablet comes with just 8GB of internal memory, so the microSD card slot is a welcome inclusion.

The MediaPad 10 Link 4G's major weakness is a poor quality screen with a low resolution. The 10.1in IPS display has a resolution of 1280x800, significantly less than the 4th Generation iPad, the Google Nexus 10 and even the smaller Google Nexus 7. It means text is jagged and often hard to read, and isn't as crisp or clear as we've come to expect. The screen is otherwise clear and vibrant enough for most other tasks, though it's not as bright as competing devices, has poor sunlight legibility, and seems to attract an excessive amount of fingerprints.

No app drawer, but otherwise business as usual

The lack of an app draw results in a cluttered home screen.

The Huawei MediaPad 10 Link 4G runs the Android 4.1 (Jelly Bean) operating system but is skinned with Huawei's Emotion UI. The biggest change is the lack of Android's traditional app drawer, so all apps sit either on the home screens. Huawei used the same system on its Ascend Mate and Ascend P6 smartphones.

Whether you prefer the lack of an app drawer is ultimately a personal preference. It does result in a more cluttered home screen if you have a large amount of apps installed, and there's no way to automatically sort any downloaded apps — you'll have to drag them around yourself or leave them in the order they were installed.

The Emotion UI on the MediaPad 10 Link 4G keeps the look and feel quite similar to stock Android, though there are two useful features that Huawei has added. A range of notification panel shortcut toggles include screen brightness, airplane mode, Wi-Fi, Bluetooth, GPS, notifications and auto rotation, though it's strange these can't be edited or changed. There's also a new Huawei unlock screen that allows the device to be unlocked directly into three user-selected apps.

The device can be a little sluggish during basic tasks.

While Android tablet apps in the Google Play Store continue to evolve and improve, there aren't enough that are designed specifically for a tablet of this size. This means many apps don't work as well as they should on the MediaPad 10 Link 4G, though it's important to note that the issue lies with Google and third-party developers, not Huawei.

Performance is about average, though definitely not outstanding. Huawei's own K3V2 1.2GHz quad-core processor and 1GB of RAM keeps the MediaPad 10 Link 4G ticking along nicely for most tasks and we had no trouble playing graphically intense games. However, the device can be a little sluggish during basic tasks, such as swiping through home screens, opening apps and unlocking the screen. Scrolling through long lists is also a jerky affair.

Vodafone's 4G speeds are impressive but obviously depend on your location.

The best feature of the Huawei MediaPad 10 Link 4G is obviously the fact that it supports Category 4 LTE, the fastest 4G speeds currently available in Australia. Huawei officially says the tablet will handle download speeds up to a theoretical maximum of 150Mbps, where other current 4G devices can only handle 100Mbps, over LTE Category 3. Vodafone customers can currently access LTE Category 4 network speeds in various parts of Sydney, Melbourne, Brisbane, Perth and Adelaide.

The speeds on Vodafone's 4G network are pretty impressive but will obviously depend on your location and network performance, so results will vary. We managed to achieve download speeds of up to 42 megabits per second (Mbps) and upload speeds of over 21Mbps on the device. Our average download speed during testing was 28Mbps.

The MediaPad 10 Link 4G has a front-facing VGA camera for videos and a rear-facing 3-megapixel camera for still photos and videos. Both are mediocre. The rear camera suffers from excess image noise, poor colour reproduction and a lack of detail, while the front facing camera works reasonably well enough for video calling apps, but the quality of photos is predictably poor.

The Huawei MediaPad 10 Link 4G comes with a non-removable 6400mAh battery. We found battery life fairly reasonable, lasting almost seven hours in most instances. It's not as good as the market leading iPad but should be enough to get you through most of the day, depending on your usage patterns.