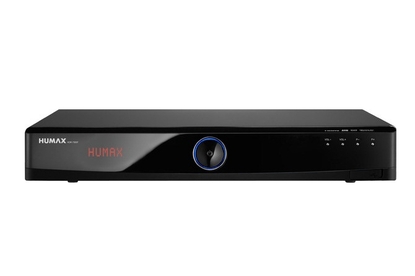 The Humax HDR-7500T is one of the best digital set-top box and PVR on the Australian market. Not only can it be used to record and play back free-to-air TV, it can also be used to stream videos and music from network locations and direct-connected USB drives. It's also easy to use, it looks good and it's nicely priced. Well worth your dollars.

The Humax HDR-7500T is well worth your consideration if you're a TV tragic and video hoarder. It's a jack-of-all-trades set-top box and PVR device that allows you to watch and record free-to-air digital TV, as well as access content from YouTube and iView, and it can also stream content from servers on your network. Not only that, it will play content from USB hard drives and can even allow you to transfer recorded files onto external hard drives.

It's a stylish and relatively well built digital set-top box and PVR, and it ships with a large and reasonably easy-to-grasp remote control — both in terms of size and key layout. A ring of light around the central power button shows you the player's status (blue when operating, red when recording and amber when in stand-by) and there is an information screen just to the left of it. On the rear is where most the device's connections reside: one TV antenna input, HDMI output, Component output, Composite output, analogue audio output, optical audio output, USB 2.0 and Ethernet. A concealed USB 2.0 port can be found on the front, along with volume and channel buttons.

There are two digital tuners in the HDR-7500T that allow you to record up to two channels at the same time, and you can also play back a recording while you do this. It's not as advanced as the Topfield TRF-2400 Masterpiece HD PVR in this respect, which allows you to record up to four channels at once (from two services), but it's a rare day to have so many record-worthy shows on at the same time.

Recordings can be initiated through the TV guide (simply press the 'guide' button on the remote to bring it up), which shows most of the programs for the day. In the past, guide information used to be restricted to 'now and next' information, but now you can get show listings for pretty much 24 hours. You can record a program simply by selecting it from the grid pattern of shows. You might have to visit each channel first in order for the guide to get populated first. You have the option of recording a program once, or recording the whole series.

The Humax also supports IceTV's IceGuide, which is more comprehensive and allows you to set recordings remotely through the Internet. It comes with a three month trial in the box. You can also add padding to recordings, so they can start earlier and finish later, just in case the network doesn't honour its scheduled times. You can do manual recordings (pressing the record button on the remote), too, which will end when the program finishes, and there is a 'skip' function so that you can breeze through commercial breaks if you want.

You can buy the HDR-7500T with either 500GB or 1TB hard drives, and the latter will allow you to record close to 400 hours of standard definition video.

The two tuners are seamless of course — you don't choose which one to use, the device takes care of everything, and we found their quality to be very good. We had no problems accessing all the channels in our test areas and images were crisp and vibrant. As far as usability is concerned, the Humax has a very low learning curve. Its operation is simple and quick, and its menu interface is mostly to-the-point and logical to navigate. Even if you have never used a set-top box and PVR before, you shouldn't find it too difficult. We reckon it will pass the 'parents' test with ease.

Installing the unit for the first time is easy: simply attach the HDMI cable (or analogue cables if you have an older TV), power it on and you're set. When you switch on the unit for the first time, all you have to do is select your region and progress through to the channel scan, which is an automatic process. You can edit the channels that show up in your channel list simply by pressing the green button on the remote. Channel changes are very swift and the on-screen display shows the channel and show information, as well as the resolution of the transmission and the end time of the program.

One of the other aspects of the Humax that is very pleasing is its media streaming. We connected the HDR-7500T to our network using a pair of Belkin Ethernet over powerline adapters and were online within a matter of seconds. The HDR-7500T obtained all network information automatically from our router without us having to enable anything or fiddle with IP and DNS settings. (A Wi-Fi dongle is also included as a bonus in retail packages.)

Once connected, the HDR-7500T displayed content off network sources smoothly, and most importantly, it played every file we threw at it. We tried AVI, MPG, MP4, MKV and VOB files that we had at our disposal, and all played without problems. To access network (or USB drive content), you have to press the 'media' button on the remote control and then select the storage source (USB or network) and media type. Content is segregated into video, audio and photos, because the interfaces for each are slightly different. You can select content simply by browsing through the folders where it's stored and the interface overall is very responsive, although long lists of files can take a long time to load initially, and this will affect scrolling performance.

A network connection also allows you to have access to YouTube, iView, WikiTV and Picasa, and these services can be accessed through the player's 'TV Portal' feature. We had no problems watching YouTube videos and ABC iView content. Videos played back smoothly over our network connection. However, the interfaces were slightly slow due to the nature of them having to load content from the network first. One thing we'd like to see in the future is a Flickr app.

As well as being a great video streamer, the Humax also does a good job of streaming music. It can find music on your servers and display it according to its meta tag information (album, artist, genre), which is very convenient. All songs that are in the same folder will play sequentially and it also supports playlists. You can change modes and shuffle or repeat songs and you can skip back and forth between tracks by using the arrow keys (rather than the traditional 'skip' buttons).

You can use all of the PVR's media streaming and playback functions even while it's recording TV shows. It will even let you transfer recorded TV shows to external hard drives. The files used to be encrypted, but updating the firmware to version 1.04.00 allows copied files to be played back on a PC through a media player (such as VLC).

The only problem we faced with the Humax HDR-7500T concerns external hard drive compatibility. USB thumb drives all worked without a hitch, but not all of our external hard drives were recognised. Our Samsung S2 portable drive, which is a 2.5in drive that draws its power from the USB port worked flawlessly to allow us to play videos and music off it. However, other similar drives that we tried could not draw enough power to spin up properly and we received error messages telling us to remove them. Updating to the latest firmware didn't fix this issue. Incidentally, to update the firmware, we had to go through the 'TV Portal' function, rather than the system menu.

All up, we like the Humax HDR-7500T set-top box and PVR a lot. We think it's one of the best devices on the market because it's such a capable recorder and also because its extra network streaming functions are top-notch — they are implemented much better in this model than they are in Topfield's TRF-2400 Masterpiece HD PVR, for example. It's a simple set-top box and PVR to operate and its interface is quick to respond to commands. We definitely recommend it. It might be a little hard to come across at your regular shopping haunts, as Humax is negotiating to get the unit sold in various retail outlets, but currently you can buy it online from IceTV (its store has 500GB and 1TB versions).