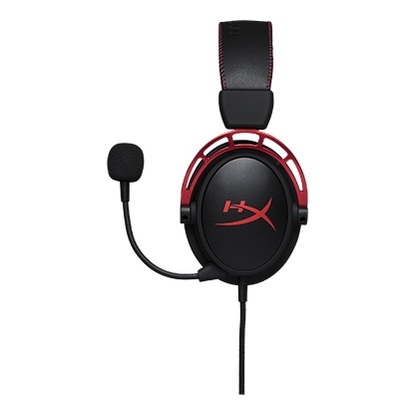 HyperX's Cloud Alpha gaming headset feels like it might be their best effort yet. Even if it is also their most expensive.

The gaming accessory market is nothing if not crowded. However, over the last few years, Kingston’s gaming brand HyperX has made solid headway within it. Despite big, well-established competition, they’ve quickly distinguished themselves as a brand that delivers solid products with the features that customers care about. What’s more, they've been able to do it while maintaining pretty competitive pricing.

However, in the face of that already-impressive track-record, their new HyperX Cloud Alpha gaming headset feels like it could well be their best effort yet. Even if it is also their most expensive.

At first glance, the Cloud Alpha looks a lot like the other headsets that HyperX have on their roster - specifically, the original Cloud and Cloud II. However, below the more-vibrant (rose red paired with a stark black) exterior lies some new tech that distinguishes from what’s come before in a pretty major way.

Unlike the company’s past efforts, the Cloud Alpha headphones incorporate a unique dual chamber design that promises to deliver gaming soundscapes with both incredible range and more accurate tone. HyperX claim this feature allows the Alpha to easily separate the bass frequencies from the mids and highs, creating a more dynamic sound that’ll make gaming experiences much more immersive.

The HyperX Cloud Alpha is a wired gaming headset with an aluminum frame and padded memory foam earcups. It boasts a dual-chambered design and a detachable boom mic that comes both TeamSpeak and Discord Certified.

The Cloud Alpha delivers 2.1-channel stereo audio via 50mm drivers with neodymium magnets and a has a frequency range of 13Hz–27,000Hz. It also comes with a two year warranty and carry pouch.

Of course, before we get to whether or not the dual chamber audio technology lives up to the hype - it’s worth touching on the design. As touched on before,the Cloud Alpha looks a LOT like the original Cloud. However, there are a few key differences and improvements to be found.

For one, the Cloud Alpha now features an expanded headband featuring softer, more pliable leatherette. As someone who’s spent a lot of time with the older Cloud headphones, they were noticeably more comfortable to wear. Specifically, the earcup padding feels much better cushioned this time around as well.

The Cloud Alpha comes with a detachable microphone and audio cable with inline control. This means It’ll work with PC, PS4, PS4 Pro, Xbox One, Xbox One S, Mac, Mobile, Nintendo Switch and select virtual reality systems. Basically, anything with a 3.5mm port. No matter your platform of choice, HyperX have tried to make sure you're covered . Unlike certain other gaming brands, there’s no meaningless dichotomy between console and PC gaming headsets to be found here.

Last but not least, it's worth mentioning the simple-but-appealing fabric carry-case that comes bundled with the Alpha. It's a small inclusion but it does add a nice premium touch to the accessory when not in use.