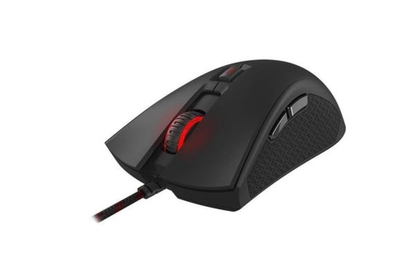 If you’re looking to pick up a solid gaming mouse on the cheap, and for some reason can’t get your hands on the regular Pulsefire, rest assured that the Pulsefire FPS Pro will fit the bill.

If you’re someone who makes their living playing one of the world’s most popular MOBA games, maybe that descriptor makes a lot of sense. It's not even necessarily casting HyperX in a negative light. After all, League of Legends could itself easily be called a ‘good replica’ of the original Defense of the Ancients.

And while the HyperX Pulsefire FPS Pro might look and feel like a replica of Razer’s most iconic mouse, that’s not necessarily a bad thing. The line between a good replica and a good product can be a blurry one.

As you’d expect, the HyperX PulseFire FPS Pro takes a lot of its design cues from Razer’s DeathAdder.

It’s not quite DeathAdder Lite but it’s nor is it a DeathAdder 2.0 either. There’s enough here that you can easily spot the resemblance but just enough subtle differentiation to stop short of calling it a knock off. It’s more of a second opinion on a winning formula.

To that end, the Pulsefire FPS Pro features textured grips on its sides, a rubberized mouse wheel, easy-to-reach DPI-toggle plus a pair of programmable buttons on the side.

The final piece of the puzzle here is RGB customizability. Like the rest of HyperX’s 2018 roster, the Pulsefire FPS Pro comes RGB enabled via HyperX’s Ngenuity lightning customization software. Up to three lighting profiles and macro key customizations can be set using this software and saved directly onto the mouse using the peripherals on-board storage.

Read more Which 2018 gaming mouse should I buy?

This is all neat stuff - but it’s also pretty standard by this point. It'd honestly be more surprising if it wasn't here.

For better or worse though, the extent of this lighting is pretty limited. You’ve got one LED on the mouse-wheel and another baked into the HyperX logo that sits underneath your palm when you use the peripheral.

And all things considered, the HyperX Pulsefire FPS Pro is relatively tame by RGB standards. At any given moment you’re using this mouse, most if not all of the lightning on it is going to be obscured. That’s not a good thing. Specifically, when the regular Pulsefire is right there.

This isn’t necessarily a unique flaw on then part of the Pulsefire FPS Pro, mind you. However, if I was someone who was going out of my way to buy this mouse because of its RGB lightning capabilities, I can’t help but feel like I’d be a little disappointed. Hopefully future iterations include more under-lighting or even some kind of cable lighting to make the inclusion of RGB more meaningful.

Still, in terms of actual usability and ergonomics, I’ve got nothing but kind words to report.

HyperX have a fierce reputation for crafting top-tier products and selling them at competitive pricing, and the Pulsefire FPS Pro is yet another confident addition to that roster. It ticks all the boxes and feels great to use - particularly for fast first-person shooter experiences like Overwatch. The Pulsefire FPS feels right and responsive in all the ways you want a gaming mouse to feel right and responsive.

As usual, it’s the price that really seals the deal here. If you’re looking to pick up a solid gaming mouse on the cheap, and for some reason can’t get your hands on the regular Pulsefire, rest assured that the Pulsefire FPS Pro will fit the bill just as well.