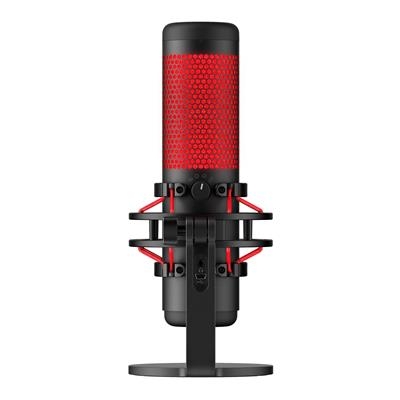 Sure, the HyperX QuadCast sounds about as good as you’d expect a Twitch-stream microphone to sound but it’s packed with enough design smarts to win you over regardless.

The HyperX QuadCast is the latest example of gaming brands trying to cash in on the rising popularity of streaming platforms like Twitch.

It’s probably not going to stave off the demands and desire of the audiophiles out there but if you’re looking for your first piece of recording kit or something cheap you can use in a pinch, this LED-lit HyperX microphone makes a decent enough case for itself.

Up-front, your mileage may vary but I actually found myself liking the design of the QuadCast right from the get go. It comes with an integrated stand and while I can see the LED lighting here being a little too obnoxious for some, I dug it. Across the board, it feels like there’s a good balance being struck here between practical inclusions like a pop filter and stabilisation and aesthetic touches like the LED things and red elastic.

There’s a mute button on top of the Quadcast. Tap it and, in addition to disabling the microphone, it’ll turn off all the lighting as well. More than just augmenting the ambient look of the piece,I found this made for a pretty good shorthand for knowing when the mic is and isn’t live.

There’s also a volume slider at the bottom, which lets you get pretty granular and find the right levels. Finally, there’s a dial on the side of the Quadcast that lets you toggle your recording settings with ease.

Sure, for those who want more, you’re going to have to invest in software that’ll let you refine the results you get from the Quadcast to your heart’s content.

However, as far as my needs go, I found that the QuadCast pretty much ticked all the right boxes. It even comes with a snazzy built-in stand, though you can swap it out for something more specialised if needed.

The HyperX QuadCast is about as plug-and-play as these microphones get. There’s no custom software to worry about here. You just connect it via USB into whatever your laptop or desktop PC and you should be good to go. It’s a shame that HyperX don’t bundle in an extra cable or converter to allow you to use it with a tablet or phone out of the box - but it’s not a massive deal breaker either.

And in practice, I did find that the HyperX QuadCast often picked up a little more ambient noise than I’d have liked - no matter how much I tinkered with the settings. It would have been nice to have a bit more control over that.

Some goes for the LED lighting on the thing. Since it’s incorporating LED rather the RGB lighting, the QuadCast is always gonna glow HyperX’s iconic shade of crimson. As with the Razer Seiren Elite, a version of this product where you have the ability to modify or customize the lighting on the QuadCast would be nice to see.

At the end of the day, the HyperX QuadCast is a tool. It’s what you make of it. And, if you’re the kind of newling content creator that it’s pitched at, you’ll probably have a good time with it.

Yes, there are absolutely better microphones out there. But if you’re trying to dip your toes into the space and don’t want to invest a whole lot of time and money, the HyperX QuadCast is probably going to be good enough that you don’t be too bothered by it either.

Sure, the HyperX QuadCast sounds about as good as you’d expect a Twitch-stream microphone to sound but it’s packed with enough design smarts to win you over regardless.