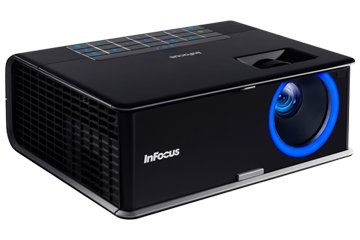 InFocus' IN3114 is well matched to current business notebooks, with a range of analog and digital video inputs. Its specifications mean it's quite a versatile performer. It can operate in well-lit rooms and it delivers a crisp image.

The InFocus IN3114 is a 1024x768 XGA data projector that has a high brightness rating of 3500 ANSI lumens and a contrast ratio of 2100:1. Its colours are vivid and saturated without losing accuracy and it offers good performance for an acceptable price tag.

The InFocus IN3114 is almost identical to the InFocus IN2114, which sits below it in the company's projector line-up. An off-set lens on the projector's mirrored black front has a translucent ring around it that lights up with a bright blue when the projector is powered on, and the top-mounted touch-sensitive buttons are well laid out. The IN3114 differs from its less expensive sibling with the inclusion of an HDMI digital video connector on its rear panel — although dual VGA ports and the USB DisplayLink port can also be used to connect a computer. The projector weighs 3.18kg and could feasibly be used as a portable unit if necessary, but it would be more at home in a permanent installation where it can be mounted on the ceiling in front or behind a screen.

The InFocus IN3114's image quality is impressive. The projector's lens displays an image that is consistently in sharp focus from edge to edge, with no loss of clarity in corners. Inputs are also very well scaled, with 800x600 and 1280x1024 inputs corrected to the IN3114's native XGA resolution, and no obvious artefacting or aliasing on diagonal lines. The projector's 2100:1 contrast ratio allows it to display images that are detailed in both dark and bright areas, with only a very small amount of black and white crush in difficult images. For most business presentations the InFocus IN3114 will be perfectly capable.

Colours from the InFocus IN3114 are well balanced, without any obvious bias or inaccuracy. The IN3114 doesn't have the same minute gradation and near-perfect toning that home cinema projectors possess, but it's more than capable of displaying DVD movies with reasonably enticing colours.

Fan noise from the InFocus IN3114 is moderate but of an acceptable timbre. We found that a large amount of air was expelled from the right of the projector, so if you have a crowded room for your presentation, someone will have warm exhaust air blown on them.

We don't have any real criticisms of the InFocus IN3114's picture quality. A WXGA widescreen version is available (the InFocus IN3116), and if you've got an appropriate projection surface we'd choose that model because of its higher overall resolution. For most business needs, though, the InFocus IN3114 is a capable performer with no crippling flaws. You also get the advantage of InFocus' excellent five-year limited warranty.