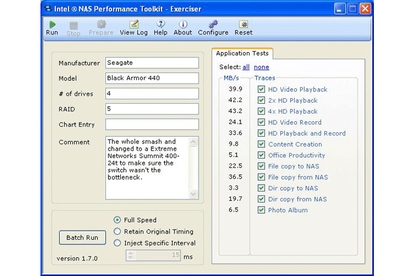 Intel NAS Performance Toolkit is a NAS test tool that doesn't take a hard drive engineer to understand and use. Because it actually plays back various types of file actions, this tool is much more "real world" than similar offerings. It even allows you to "record" and play back file actions to more closely simulate your production environment.

Iometer and IOzone are great tools for testing storage devices, but they have one significant drawback: They dive deep into the minutiae of the block storage and file systems they measure and, thus, yield results that might as well be written in Greek (apologies to the Greek people) if you're not a hard disk engineer.

The Intel NAS Performance Toolkit (NASPT), a file system exerciser designed for the direct comparison of NAS performance, is much simpler and easier to use. While Iometer and IOzone work deep within the operating system to directly measure iochannels, disks, controllers, and such, NASPT zeroes in on what the ordinary user might experience when they set up the storage system.

Intel's NASPT solves some of the "forest from the trees" issues in file system testing. Instead of examining each subsystem in isolation, the Intel toolkit looks at how the NAS works overall. In the real world, both the user space applications for mounting the NAS and the network used to access the NAS have an effect on the user experience. NASPT takes these factors into account.

What NASPT does is play back traces of typical traffic that SOHO and SMB users might be tossing onto some sort of shared storage. For instance, the 2x HD Playback option mimics someone fast-forwarding (at 2X speed) an HD-quality video. The Office Productivity option represents the tiny little reads and writes produced as Word, Excel, and PowerPoint document editing takes place. A really cool feature is the ability to record a trace from any (32-bit) Windows application to create additional tests.

NASPT has limitations. It runs only on 32-bit Windows XP and only on workstations with Intel CPUs. You must have a drive mounted (i.e., a drive letter); the use of Universal Naming Convention (i.e., \\server\share) is not supported. NASPT is also limited to measuring performance from a single workstation; there's no ability to correlate data gathered across multiple workstations — at least not yet. NASPT is only five months old.

I'm also pretty excited that the Intel NASPT is a free download. After all, good science demands that results be challenged and experiments be repeated. "Free" means you can repeat my experiments on your own NAS in your own environment. Just use some common sense in when and how you run any sort of performance test. Throwing several gigabytes of test patterns across a production network when the accounting department is trying to post its month-end numbers is not going to make you popular. Instead, either test on an isolated network or do a bit of math first. Add up those file transfer sizes and see if running it on a production network is a reasonable thing to do.

The Intel NAS Performance Toolkit is free, it's easy, and it's reasonable to run. Don't believe those glossy brochures the storage vendors toss at you; it's in your best interest to confirm those numbers. If your findings do match the vendor's, I'll be surprised. Vendors always publish the best results they can get, meaning they were typically created in a lab under ideal conditions.