Intel is opening the door to innovators with this new NUC, allowing for third parties to print their own lids 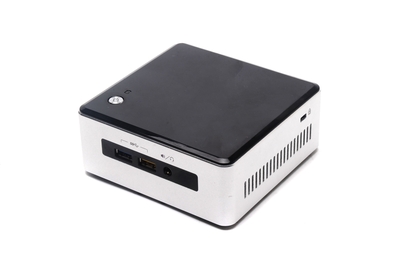 The use cases for an Intel NUC can vary greatly. Whether you’re looking to kit out a new office or a classroom, or simply want a small PC that can be used in the home, the Next Unit of Computing (NUC), as it’s called, can be used for all manner of scenarios due to its size and notebook-equivalent processing power.

It’s the type of computer that can sit inconspicuously on a desk, next to a TV in a living room, or it can even be mounted behind screens and inside cabinets. It depends on what your objectives are and how creative you want to be with its implementation.

If you’re already familiar with the NUC, then you’ll know that it’s a small form factor PC that can take on the responsibilities of a much larger system. Within its tiny confines (111mm wide, 115mm deep, and 49mm tall), you get a system that includes plenty of processing power, as well as convenient ports: four USB 3.0 ports (two at the back, two at the front), mini-HDMI, mini-DisplayPort, Gigabit Ethernet, and a headset port (at the front).

For the new model that we are looking at here (the NUC5i5RYH), Intel has come up with a way for people to add more functionality to the NUC in order to suit various home and business needs: replaceable third-party lids. The NUC’s lid can be removed and replaced not just with different colours or custom looks, but also with lids that add extra features.

By default, the NUC comes with a black lid that is just a cover for the unit. Depending on what you plan on doing with the NUC, you can theoretically replace this lid with one that adds a function of your choice. This could be an NFC module, a wireless charging pad, or even a connectivity bay that includes more I/O ports and an SD card reader. These are all just examples of what third parties could provide.

It’s an interesting innovation that’s sure to pique the interest of many custom builders out there, and especially those of you getting into 3D printing, as Intel has files on its site for printing replaceable lids.

Intel didn’t supply us with any third-party lids for our review, so we’ll just imagine what the NUC could be with some of that extra functionality added to the top. What we don’t have to imagine is how solid a computer the NUC is without all the extras. What you’re getting with this model is a fifth-generation Intel Core i5-5250U based computer that has enough power to drive everyday office applications, as well as multimedia and communications tasks.

Unless you buy the NUC as a pre-built unit, you’ll have to add the rest of the guts yourself. The guts in question here are the RAM modules and the storage. This NUC comes with two SO-DIMM slots that can accommodate up to 16GB of DDR3L RAM (at up to 1600MHz), and there is an M.2 slot that can be used for a solid state drive that features that form factor.

What we like about this NUC is that it also features a 2.5in drive bay with a SATA3 port, and this means you can install a humble hard drive if you wish to cut down on costs and overall fast system performance isn’t your concern. Conversely, it means you can use a fast M.2-based SSD for fast system performance, and at the same time install a regular notebook hard drive as a location on which to keep all your large files, be they for work or entertainment.

This NUC makes for a useful media centre PC due to its size and the fact that you can install a hard drive in it to house video files locally. There is a mini-HDMI port on the rear that will require the use of a third-party adapter in order for you to connect it to a TV using regular HDMI (we used a $15 adapter from Officeworks), and there are numerous USB 3.0 ports that can be used to connect wireless peripherals so that you can control the NUC from afar (we used a Rapoo 5GHz wireless keyboard with integrated touchpad).

Our operating system of choice was Windows 7 Pro, which we installed off a custom-made USB stick, though could also use a version of Linux if you want -- just make sure you check all the requirements on Intel’s site for BIOS settings and other requirements. The rest of our configuration was supplied by Intel, that being 4GB of RAM and an 80GB M.2-based SSD. Suffice to say, this configuration proved to be fine for our everyday computing and entertainment needs. We could easily stream video on-demand services such as Netflix and NBA League Pass, and it was no problem to edit photos and multitask for our day job tasks.

For more involved photo or video editing, we’d install more RAM and a faster SSD, though remember that this PC isn’t really designed for tasks that are too tough. The SSD that Intel sent us recorded modest numbers in CrystalDiskMark: 385 megabytes per second (MBps) for reading and 130MBps for writing. When we installed our system on a SanDisk Extreme Pro SSD, the performance shot up over 500MBps for both reading and writing.

The good performance isn’t a surprise given that the CPU at the helm is an Intel Core i5, albeit an ultra-low voltage model. It basically provides the same level of performance as a mid-tier laptop (or Ultrabook), and this was shown in our Blender 3D rendering test, in which a time of 46sec was recorded (the same as the Lenovo ThinkPad Carbon X1 that we reviewed earlier this year). Graphics performance was judged with 3DMark’s Ice Storm and Cloud Gate tests, in which respective scores of 36715 and 4410 were achieved. You can’t play games on this NUC, unless they are of the simple variety.

A tiny fan installed to keep the system cool, with plenty of air vents located on all sides, in addition to an exhaust at the rear. It doesn’t make any noticeable noise in a typical room with normal ambient noise, and will only be heard in the quietest of environments. Power is via a 65W ‘wall-wart’ style of adapter, and our test model had one with an upside-down design. That is, the adapter’s orientation was upward when plugged in to a regular wall outlet.

Other things you should know are that this NUC has an infrared module built in at the front, there is an integrated Wireless-AC 7265 module with two antennas that supports 802.11ac Wi-Fi up to 866 megabits per second (Mbps), and you also get Bluetooth 4.0. A Kensington lock facility is present.

The target market is really anyone who has a need for a small computer that can offer Core i5 (for other models Core i7-class) processing power. Of benefit is the customisable RAM and storage, and we think that the idea of replaceable lids, not only for aesthetics, but also functionality, is an interesting one for third party manufacturers to investigate.