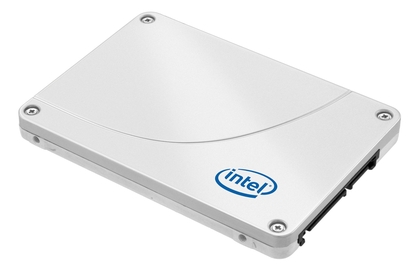 The Intel SSD 335 uses the latest in flash storage technology and it's a great little drive if you fancy a speed boost. It will noticeably improve not only the performance of a typical laptop, but also its battery life. If you want to use it in a desktop PC, you can make use of the mounting kit that ships with it, too. All up, a worthy upgrade.

Intel's latest solid state drive, the SSD 335 Series, is touted as being the first SSD in the industry to ship with 20 nanometre flash memory chips, made jointly by Intel and Micron Technology. The smaller chips are a natural progression for the industry and will eventually allow Intel (and other vendors) to produce more affordable drives. The SSD 335 Series family includes 60GB, 128GB, 180GB and 240GB capacities, with the 240GB drive being the first to market at a cost of $263.

The Intel SSD 335 is a 2.5in drive that is designed to be an upgrade for either a notebook or a desktop PC. It even ships with a 3.5in mounting kit to aid its installation in a tower PC. The kit is comprised of a 3.5in metal mount, to which you will need to screw in the SSD if you wish to install it in a 3.5in hard drive bay, and you also get the requisite power and data cables to plug it in. The interface is SATA III (6Gbps), so it's well suited to modern systems that can support this maximum speed.

We tested the drive in a Dell Latitude E6420 notebook rather than a desktop PC. The drive's height is 9.5mm, which means it will fit into any laptop that can take a regular-sized 2.5in notebook drive, such as our Dell. It's a drive that weighs about 80g and this is lighter than a mechanical laptop hard drive, which can weigh over 100g. Better still, the Intel SSD 335 will run a little cooler than a hard drive and it won't make any noise.

Our Dell Latitude E6420 laptop benefited greatly from these traits. Whereas its stock WD Scorpio Black hard drive was audible and also made the area below the palm rest get noticeably hot, the Intel SSD 335 made the laptop more comfortable to use because the noise emissions from the laptop were reduced and because not as much heat was generated.

The boot up speed of our laptop was also improved when we used the Intel SSD 335 as the system drive. It took only 28sec to boot from a powered off state until we gained control of the cursor in Windows 7 Pro. This is the same time as the OCZ drive and they are both 12sec faster than what the mechanical WD drive recorded.

In terms of sequential read and write performance, the Intel SSD 335 performed very well. In CrystalDiskMark, its read time was 433 megabytes per second (MBps) and its write time was 311MBps. These rates are both faster than the OCZ's 422MBps read and 173MBps write, and the Intel also proved to be faster in random read and write operations. Against the Dell's stock WD hard drive, the Intel SSD was 337MBps faster at reading and 214MBps faster at writing.

Importantly, the Intel SSD 335 made our laptop feel zippy during everyday operation. Programs loaded very quickly (especially Web browsers) and large data files were also handled with swiftness. We were able to duplicate data files at a rate of 155MBps, which is noticeably faster than what the OCZ recorded in the same test (112MBps), and almost 120MBps better than the mechanical drive.

The Intel SSD 335 uses multi-level cell (MLC) technology, a SandForce SF-2281 controller and it supports TRIM. Its formatted capacity is 223GB, which is a decent glob of space for the operating system, programs and large data files. The cost per formatted gigabyte is about $1.17, but you have to remember that the price also includes the extra mounting kit.

Intel has a migration tool available on its Web site that can be used to clone an existing hard drive (the URL to it is printed on a mini CD-ROM that ships with the drive). It's based on Acronis True Image software and you'll need to use a PC with the Intel SSD attached in order to operate this tool. The software won't run unless the Intel drive is attached, so it's only useful if you have a desktop PC to hand.

If you only have a laptop that you're upgrading, you'll have to make different arrangements. A lot of brand name laptops such as the Dell that we used for our testing, come with software that allows you to back up the system drive to optical discs or external storage, which you can then use to boot to and install on the new SSD once you've inserted it in your laptop. If you're going from a much larger hard drive to this SSD, then you'll need to decide which programs and data you want to move over to it as well — the SSD won't have space for everything.

Overall, this is a great little drive from Intel that's a worthy upgrade for an old, or even a new laptop that doesn't already use solid state storage. We also like the fact that it ships with a desktop kit, which makes it easier to use if you plan to install this drive in a tower PC.