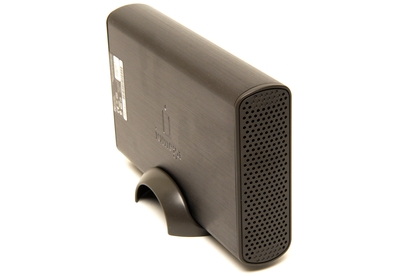 Although the Iomega Home Media Network Hard Drive NAS device is a bit pricey, has slow transfer speeds and lack advanced server options like BitTorrent downloading and group permission modification, it's an attractive device that is very easy to use.

The Iomega Home Media Network Hard Drive is a Gigabit Ethernet-capable NAS (Network Attached storage) device with a 500GB storage capacity. It has a simple and modern design, which features a polished aluminium casing that has a black plastic heat vent on one end, and the USB 2.0, network and power ports on another end. Two indicator lights let you know when the drive is in operation and also if the drive is full. If you think the lights are too bright, you can change the luminosity or turn them off using the Iomega Home Storage Manager program.

The USB 2.0 port and the Gigabit Ethernet port are located next to the power input, although the USB port is only designed to connect network printers or USB sticks (for expanding the storage capacity) — it cannot be used to connect the Iomega Home Media Network Hard Drive to a computer.

Once the hard drive is connected to a router or directly to a computer using Gigabit Ethernet, the drive can be found and configured using the bundled Iomega Home Storage Manager software.

While the Iomega Home Storage Manager program is efficient and user friendly, it lacks advanced features such as group creation and access control, BitTorrent downloading and automatic download scheduling. It allows you to set passwords for folders and map the Iomega Home Media Network Hard Drive, and it also lets you switch on iTunes and DLNA for the stored folders.

Iomega also includes Retrospect Express HD 2.5, which is a simple and useful synchronisation/backup program. You can choose to synchronise or backup single files or whole systems, although doing so may take quite a while due to the drive's slow transfer speeds.

To test the transfer speeds, we copied 19.4GB worth of files between the Iomega Home Media Network Hard Drive and our test PC, which uses a Gigabit Ethernet network card and a Western Digital VelociRaptor (WD3000GLFS) hard drive.

The read, write and folder-folder copy speeds were just 21.55MBps, 8MBps and 6.23MBps respectively, which means that transferring large files — for example HD movies or recorded television — may take a long time. These are slow speeds, but the Iomega Home Media Network Hard Drive will have no problems playing back HD movies that are stored on it. Even so, this hard drive is slower and more expensive than the Western Digital MyBook World Edition (1TB) NAS.

Throughout our testing and usage the Iomega Home Media Network Hard Drive remained fairly cool despite hours of data crunching — the drive never got too hot to hold.

While the Iomega Home Media Network Hard Drive looks good and is simple to use, it's also slower and more expensive than comparable devices on the market.