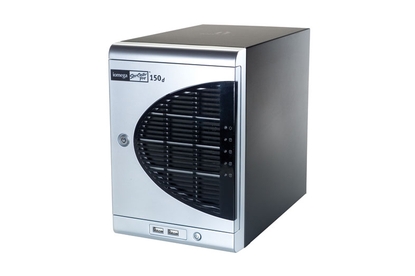 This is an efficient and effective NAS system for businesses.

The StorCenter Pro 150D is what you expect of a business-focused network-attached storage (NAS) device: a big boxy chassis that dwarfs its rivals, dull looks, a noisy fan, and support for enterprise-level technologies such as Microsoft's Active Directory. But don't let that put you off. If you can tuck it away in the corner of your studio, then the 150D is worth considering as it's an efficient, effective NAS system.

The 150D's sturdy plastic door hides four drive bays with latches, drive trays to be popped in and out quickly. Drives do have to be screwed into these trays, so swapping drives isn't as fast as on the Drobo: although, as with the Drobo, drives can be swapped while the unit is on and StorCenter automatically rebuilds a RAID array as soon as a new drive is inserted.

The bundled Iomega Discover Tool is fiddly, and we had trouble mapping the NAS to a drive in Windows, but it offers functionality that most NAS have only in their Web interfaces. The 150D's browser-based interface is basic and unfriendly, and when we changed the RAID mode, existing user accounts were deleted.

In our speed tests, the 150D performed slower than Acer Aspire EasyStore for copying data to, and not much faster than the three-drive Thecus N3200 — though for copying files from the unit it was the fastest overall.