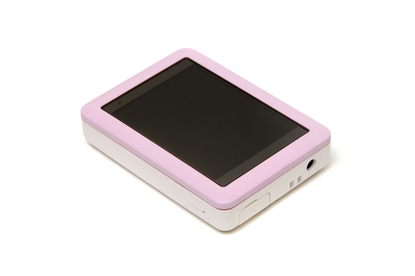 The iRiver Lplayer is an impressive portable media player. It offers a host of features, has a good quality screen and comes at a low price. Just a few niggling interface and control issues detract from what is otherwise a strong iPod nano competitor.

Sitting at a fairly low price point, iRiver's latest entry-level portable media player, the Lplayer, is a solid product. Looking similar to iRiver's line of Clix players, the Lplayer supports a wide variety of formats and has an impressive little LCD display, making it a strong competitor to the iPod nano. The only let-downs are a few interface and design issues that can make navigation frustrating.

Like the Clix 2nd Generation, the Lplayer uses a D*click interface to navigate the menu. This basically means the edges of the screen double as buttons, giving the unit an extremely minimalist look with only two buttons running along the base and no other controls to speak of. In general this interface is fine, although it can be a little fiddly at times and takes some getting used to. To access the audio options menu, for example, you have to hold the pause button down for several seconds while you're on the playback screen.

The buttons also stick from time to time and aren't as responsive as we'd like, often requiring multiple presses. That said, the menu itself is well laid out and looks quite good. This can be somewhat attributed to the display, which we felt was of an extremely good quality. It's only two inches in size and has a 320x240 resolution, but the videos we watched on it looked great. Contrast was impressive, with good gradation from light to dark; colours were well saturated without looking too vivid. As it's a tiny display, we still wouldn't recommend it for serious video watching. For video clips or short bursts it does the job nicely.

A wide variety of file formats is supported, including MPEG4, WMV9 and XVID. On the audio front users can listen to MP3, WMA, ASF, OGG and FLAC. This is an extremely hefty array of formats and should please most users.

Video files will sometimes work straight away, but other times will need to be run through the provided conversion software first. Even then results aren't guaranteed, with some footage coming out with stretched aspect ratios and other anomalies. However, this is fairly standard for a portable media player, so no surprises there.

Audio quality wasn't stellar but it was still satisfactory. We didn't find the sound as detailed or fun as on some other players, but it was rich and clear when tested with some third-party headphones. As always, the stock ear buds were a disappointment.

All the standard features are available. You can make playlists, apply a variety of pre-set equalisers (or create your own) and use both shuffle and loop modes. There are also some extra features such as a text viewer, picture viewer, FM radio and voice recorder. The features all work well and provide some additional functionality not found on the nano.

All files can be transferred via drag and drop on a Windows PC. There are folders for each type of media (music, video etc.) and you can either put the files directly in the right place or in subfolders. We found the in-menu sorting was a little all over the place at times; for example albums weren't always ordered by track number when we filtered by artist, which became frustrating.

Aesthetically the Lplayer is nice, with a slim, petite design that slides easily into a pocket. Thanks to the control scheme, it has no wasted space: just the display and a small bezel around it. It doesn't look particularly stylish but it does the job just fine.