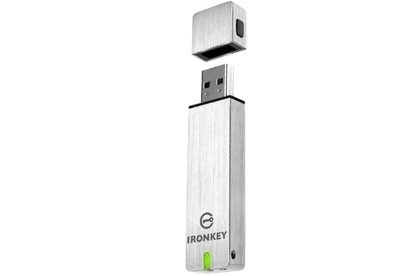 The IronKey is targeted at people who need to go that extra mile for security and are willing to pay for it, but if you must have the highest possible reliability and encryption, this drive should be at the top of your portable storage list.

It has been more than a year-and-a-half since I last reviewed an IronKey secure USB flash drive, so when the company sent one my way with a few new features I jumped at the chance to see if there had been any major improvements over the last version I tested.

From what I can tell, and what IronKey can tell me, there are scant few upgrades to this latest version of what is still arguably the most secure USB drive in existence. The new S200 IronKey model doubles the maximum capacity of the previous drive to 16GB, and it is now compatible with Windows 7. (The drive was already compatible with Windows Vista, XP, Mac OS X and Linux.)

This is not a drive for the average user. The IronKey is high-end and its price tag reflects that. A drive with only 1GB capacity costs $104.20. If you want the maximum 16GB capacity, the price jumps to $388.83

I don't know that this falls under the term "upgrade," but the drive has received validation with the Federal Information Processing Standards 140-2, Level 3, which covers document processing, encryption algorithms and other IT standards for use in non-military government agencies, including their vendors and contractors. IronKey states that it is the world's only FIPS 140-2, Level 3 certified USB drive.

What sets the IronKey apart from most other USB drives is that its maker uses high-end single-level cell (SLC) NAND flash memory chips as opposed to multi-level cell, consumer-grade (MLC) NAND. SLC has better native performance over MLC, and, perhaps most importantly, it has as much as 10 times the lifespan, up to 100,000 write/erase cycles.

Because the IronKey uses high-end SLC NAND, its throughput tends to be a bit higher than most MLC-based flash drives, particularly when it comes to write rates. An IronKey representative said this new version is also supposed to be faster than the last model due to improvements in the firmware.

I tested the drive using ATTO Technology's ATTO Disk Benchmark v2.34, and Simpli Software's HD Tach v3.0.4 benchmarking utilities. With the HD Tach utility, the IronKey returned a random access time of 4.2 milliseconds, an average sequential read rate of 25.7MB/sec and a burst rate only slightly higher of 26.9MB/sec. CPU utilisation was a high 19%. The ATTO Benchmarking software showed a similar read rate, 24.4MB/sec, and a write rate of 14.8MB/sec.

The tests revealed generally slower I/O throughput rates than the last version of the IronKey drive I tested, but to be fair, the last drive had 5GB of capacity and the one I was testing for this review had only 1GB. Generally speaking, the more capacity a NAND flash drive has, the better the performance.

All the same, the performance results using HD Tach on the last drive came back with 31MB/sec. burst speed and an average read rate of 29.6MB/sec. CPU utilisation rate was higher at 22%.

To compare, I tested SanDisk's Ultra Backup USB flash drive, which is based on consumer-class multi-level cell NAND flash. SanDisk's drive returned a random access time of .8 milliseconds, an average read rate of 24.7MB/sec, a burst rate of 26.4MB/sec and CPU utilisation of 12%.

ATTO's benchmark software showed the greatest disparity between the two drives; SanDisk's drive turned in a respectable 24.2MB/sec average read rate, but a slow 6.7MB/sec write rate. So, there is something to be said for SLC NAND performance.