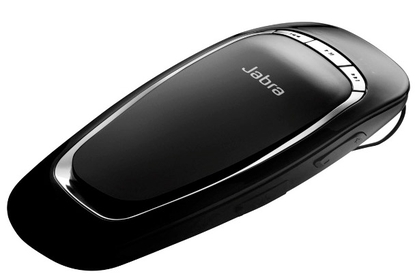 The Jabra Cruiser delivers hands-free calls and music over your car's stereo with minimal hassle.

The Jabra Cruiser is the latest car-friendly Bluetooth gizmo to promise hands-free use of your cell phone while driving, but the device's talents don't stop there. A new member of the Jabra Smart Series, which includes the Jabra SP700 Bluetooth car speakerphone, this shiny black device (which resembles a small, flattened-out flying saucer) can also transmit phone calls and play any music on your cell phone through your car's FM radio.

I tested a shipping unit in my aging Honda Accord, using a couple of iPhones as phone and music sources, and was impressed overall--though I did run into some usability glitches, most of which involved pairing with two phones (a supported feature).

To set up the Cruiser, you must first charge it via a USB cable attached to a PC; the device doesn't come with a standard plug, but it does include a car charger that the USB cable can connect to when it's inside the vehicle. Turning the charged device on for the first time activates pairing mode (the Cruiser's built-in voice announcement system will confirm this); you then complete the pairing with your phone's Bluetooth utility.

Inside your vehicle, you clip the Cruiser to a sun visor (the device's wire clip also functions as an antenna), and at once it's ready to function as a speakerphone; to answer calls, you simply press a button (you can initiate calls on your cell phone, too, and they will automatically transfer to the Cruiser). In speakerphone mode, audio quality for the driver is only so-so; but when I received calls from a driver using the Cruiser, he sounded as good as if he were holding the cell phone to his head.

Not surprisingly, switching to FM mode dramatically improves audio quality for the in-car user. To make this switch, you press a button on the left side of the Cruiser; an FM status light turns on, and the Cruiser announces a frequency. You then tune your car radio to that frequency, and--if nothing else is broadcasting on it--you're good to go. Incoming calls will automatically play through the stereo, as will any music that you play. Everything sounded terrific in my tests.

Some of the Cruiser's more exotic controls aren't intuitive. For example, it can put a call on hold and let you answer a waiting call, and it can transfer a call from your cell phone to the speaker and back. It's a good idea to keep the manual handy in the car, at least until you've mastered all of the features you may want to use. Depending on the phone you're using, the Cruiser also supports such advanced features as voice dialling and reading the name of a caller whose number is in your address book (by default, the Cruiser simply reads the caller ID phone number).

I did run into some problems after syncing my two iPhones to the Cruiser. Whenever the first phone I connected was in range, the Cruiser would try to pair up with it, even if I was using it to play music with the second phone. Jabra's manual says that the Cruiser's last-call redial feature will always dial whatever the most recently dialled number was, regardless of which phone you were using, but I saw no good explanation for dropping a live connection.

Using the FM hookup can be complicated, as well. If you happen to drive into an area where your frequency is already in use, you must manually scan for a free frequency and then manually tune in the Cruiser. This can be a problem on long trips, where you'll inevitably run into a commercial station using the (formerly available) frequency that you set the Cruiser to. You can manually select a new frequency, of course, but reconnecting is annoying.

Overall, I'd recommend the Cruiser if you are on a budget and are looking for an affordable (US$70), easy-setup device to support hands-free calls in an older vehicle (some new cars have this functionality built-in). The ability to channel audio through your stereo can make a big difference if you have to take calls in your car.