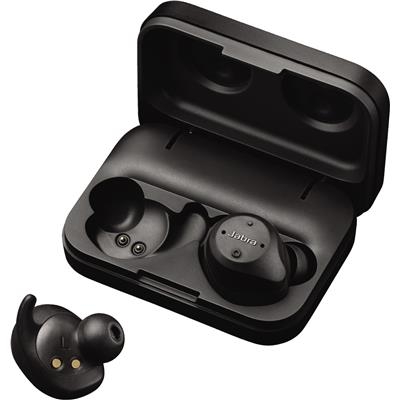 Jabra have definitely made a better pair of buds here. However, it's more of a personal best than a world record.

From the moment that Apple made its “courageous” call to kill off the headphone jack, the race has been on. Just over twelve months later, there are still plenty of brands striving to stake their claim while others have settled in for the long haul.

Within that initial throng of wannabes, last year’s Jabra Elite Sport earbuds proved the brand a serious contender. A few first-generation tech hiccups aside, they provided a pretty compelling glimpse of what the true wireless future could look like and offer.

This year’s refresh of the product doesn’t change things a whole lot. However, the small changes Jabra do make here go a long way towards keeping the Elite Sport earbuds a pretty appealing option - even if they arguably could (and should) have taken things much further.

The Jabra Elite Sport are wireless in-ear headphones that pull audio from a connected  smart device via Bluetooth 4.1. The earbuds boast a set of bespoke bass-enriched speakers with a 20 Hz to 20 kHz frequency range and passive noise cancellation. They’re rated IP67 for water and sweat resistance and also feature a built-in heart-rate monitor.

On their own, the Elite Sport earbuds tout a battery life of four and a half hours. However, as per usual, the carry-case for the earbuds doubles as a charger. All told, a full charge on the buds plus the case will net you 13.5 hours of continuous use.

As with last year’s effort, Jabra haven’t skimped on the customization options. The company have thrown in a trio of earwings, silicone eargels and foam tips for the earbuds. Speaking of pack-ins, they also come with a three year warranty.

In Australia, the Jabra Elite Sport (2017) are available through Jabra, Amazon and JB Hi-Fi.

At a glance, there’s not a lot that has been changed here between the new Elite Sport earbuds and last year’s model. They’re still a set of ergonomic, obsidian nubs that sit comfortably within your ears.

Basically, the short version is that the things that worked the first time around around the track remain great. Unfortunately, some of the weaknesses in the design of Elite Sport have also persisted.

The four button control scheme (with two switches in each bud) is easy-to-learn but the level of physical pressure required to trigger ear button remains an irritation. Having to physically poke your ears whenever you want to lower the volume or answer a call is still a very annoying downside to using these buds. Here’s hoping that Jabra address this very literal pain point with the next iteration.

Another area where Jabra could learn from its competition is the out-of-box experience, which isn’t as intuitive or exciting as it could be. This might sound like an odd point of criticism to raise. However, it feels like Jabra are presenting the Elite Sport earbuds as just another set of earbuds when they could very well be the most exciting product on their docket. More specifically, it feels like Jabra could definitely learn a thing from Jaybird’s RUN true wireless earbuds here.

The easiest way to sum up the new Jabra Elite Sport earbuds is to say that they offer more of an already-good thing. Nobody went back to drawing board here. They stuck with what worked the first time around - and there’s something to be said for that approach.

After all, when it comes to battery life, more is clearly a good thing. 4.5 hours to a single charge might not sound like a lot. However, it’s holds up as 50% increase over the first-gen Elite Sport earbuds - which makes it pretty significant in context.

Unfortunately, this increase doesn’t quite give the Elite Sport too much an edge as the competition have also upgraded their arsenal. Samsung’s refreshed IconX headphones boast 5-7 hours per charge. Apple’s new AirPods land with about the same but boast a case that packs more than double the number of total charges as Jabra’s offering does.

The new Elite Sport does manage to outrun and outlast Jaybird’s new RUN earbuds (which offer 4 hours per charge). Nevertheless, even that edge is tempered by the fact that Jaybird’s product is a first-gen one. When it comes to battery-life, the new Elite Sport earbuds definitely offer more - but not enough to keep pace with the competition.

In contrast, the everyday performance of the Elite Sports is an area where Jabra seem to have made strides. I found that the new Elite Sport earbuds were significantly more reliable than last year’s model.

With them, I frequently found that Jabra’s earbuds would drop out almost as soon as I’d enter a new room. This time around, those issues were almost non-existent. During the weeks of regular use I subjected the new Elite Sports earbuds to, things were about as seamless as Bluetooth audio can get.

As a result, I found myself appreciating the audio quality the Elite Sport were capable of delivering a lot more. Music sounded great through the bass-enriched speakers and the built-in microphone and ambient noise filtering worked like a charm whenever I had to take a call.

The last thing worth touching on here is the Jabra Sports Life app. Using it, Elite Sport owners are able to track their own fitness levels and then develop, manage, experience and evaluate workouts designed to help you meet your meet your goals. In practice, this side of things is a little more clunky than what’s offered by brands like Fitbit and Samsung. That said, there’s definitely added value to be found here if you’re willing to make use of it.

All things being equal, Jabra’s refreshed Elite Sports are still a good option if you’re looking to make that leap to true wireless. Unfortunately, it feels more difficult than ever to call them out a great one. Last year’s product sat on the cutting edge. Without features like on-board storage or category-leading charge times, this year’s effort feels a little further behind the curve.

Jabra have definitely made a better pair of buds here. However, it's more of a personal best than a world record.