Phonics is a widely used method of teaching children to read, pronouncing letters and letter groups as they sound rather than the traditional "A", "B", "C", etc. 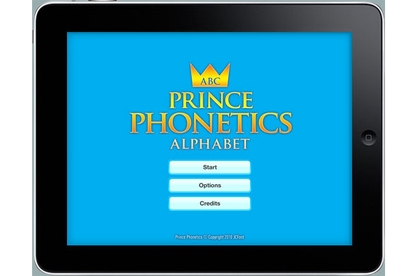 Prince Phonetics HD is a clean and simple phonics reading app for children that’s easy to use and well made. It's so simple that the price -– mid-range for such an app –- is a little steep for its one-trick approach to the subject. But it works and at least parents will have a handy reminder of the sounds being taught in class.

There are plenty of Reading iPhone and iPad apps for children but most stick to pronouncing B as “bee” rather than the phonic “ber”.

For children to really get the most out of an early years phonic education it’s best that they stick to that pronunciation only at the beginning.

(Of course they’ll probably be able to sing the alphabet by rote but for learning to read letters and how they’ll sound phonics has a lot going for it.)

The clear English voice-over is by five-year-old Molly, aged 5. Thankfully it’s ‘Zed’ – I mean ‘zzz’ – rather than the American ‘Zee’.

It’s called Prince because it’s in blue, and generalists will be pleased that there’s also a Princess Phonetics HD app in – you guessed it – pink.

It’s great that the app shows both uppercase (capital) and lowercase letters, as children can get confused why there’s two different shapes and showing them together should help understanding.

You touch the individual letters to hear the letter sounds. It’s that easy.

It’s a shame you can’t use more of the iPad functionality – for instance, swiping to the next letter. The only options this app offers is to change the background to different types of blue.