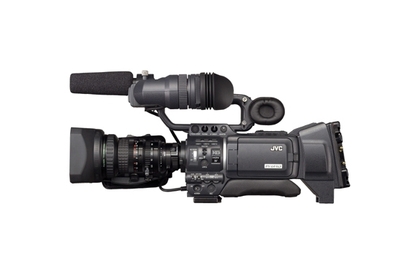 A decent camcorder, but one of JVC's cheaper models would make sense for many users.

Unlike Canon and Sony, JVC differentiates considerably between its consumer and professional ranges, and leaves no middle ground. Compared to other high-definition camcorders we tested recently, the GY-HD201E felt the most like TV studio equipment.

The Fujinon 16x lens is removable, and a standard 1/3in bayonet fitting accommodates at least five alternatives, and even 1/2in and 2/3in lenses with adaptors.

Using a trio of CCDs with 1.1 megapixels each, the GY-HD201E has more than enough for its native 1280x-720 shooting resolution. JVC has opted resolutely for progressive 720p HDV (aka HDV1) in its professional range, and uses it to maximum potential. The GY-HD201E can shoot at 24, 25, 30, 50 and 60fps, although the latter modes are less widely supported by editing software. This model covers everything from film production to TV work.

In our daylight test, the GY-HD201E produced highly accurate colour, although the image isn't quite as sharp as Sony's . The GY-HD201E achieved smooth motion, however, thanks to its 50p recording. In our low-light test, it produced one of the darker images, but there was little grain.

The JVC HDV camcorders have always stood out for their lens options, and the GY-HD201E is the only camcorder at this price point to offer this facility alongside 50p shooting at this price point. For sports and nature videographers, this is a great option.

But for more general shooting, one of its lesser siblings would make more sense. It's worth noting that the GY-HD201E uses the high-end IDX system, and doesn't come with batteries or a charger, so this adds to the cost. If you don't need to shoot at 50 or 60 progressive frames per second, but still want different lenses, the GY-HD111E and the GY-HD110E (without FireWire input) are cheaper.